Devon Conway (38 not out) and skipper Kane Williamson, who was yet to open his account, were at the crease during the interruption 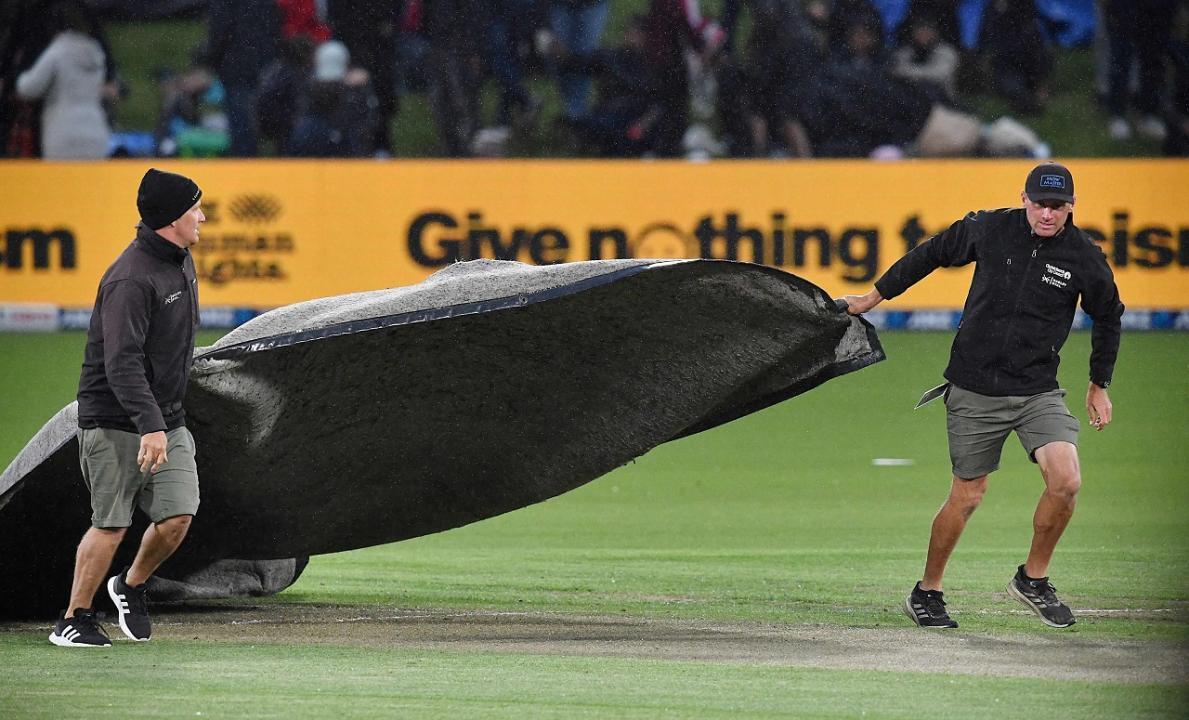 Ground staff cover the cricket pitch as rain stops the play during the third and final one-day international cricket match between New Zealand and India at Hagley Oval in Christchurch. Pic/AFP


Finn Allen and Devon Conway had a 97-run opening stand to get New Zealand's chase of 220 against India start on a bright note. Pacer Umran Malik broke it by taking out Allen, but rain forced the third and final ODI between India and New Zealand at Hagley Oval on Wednesday to be called off.

When rain arrived, New Zealand were at 104/1 in 18 overs and DLS calculations showed that they were ahead by 50 runs. But to constitute a full match, 20 overs were needed to be completed in the second innings. But with rain washing out the prospect of playing out remaining two overs for a result, New Zealand clinched the series 1-0.

In this tour, three out of six matches were washed out due to rain, and one ended in a tie because of rain. Only two matches were played in full, one in T20Is and other one being ODI series opener. India won the T20I series by the same scoreline as New Zealand clinched the ODI series.

In chasing 220, Allen and Conway started cautiously, adding only 34 in the first eight overs as Deepak Chahar and Arshdeep Singh kept them in check. Allen, though, was more aggressive of the two, getting some boundaries as Conway took time to find his groove.

Conway then single-handedly upped the ante in the 10th over when he struck four boundaries off Chahar -- with a straight drive being the pick of the shots. Allen also teed off when he used Umran Malik's pace in the next over to hit back-to-back boundaries.

Allen got his fifty when he hit a flat-batted six over long-off off Washington Sundar. After pulling Malik through fine leg in the 17th over, Allen tried to reach out to a short ball, but toe-ended the cut to cover, ending the 97-run opening partnership as he fell for 57.

Conway then pulled Arshdeep through deep mid-wicket before rain put a pause on the proceedings, not for the first time in this series. Earlier, all-rounder Sundar slammed his maiden ODI fifty to carry India to a modest 219 in 47.3 overs. If not for his fifty, India would have ended up at a much lower score.

On a pitch, where there was a lot of grass and lateral movement, and with overcast conditions, India's innings never really got going, till Sundar stood up and applied himself to hit five fours and a six in a 64-ball knock to take the visitors past 200-mark.

Apart from him, Shreyas Iyer also played a handy knock of 49 as rest of the batters struggled and perished to a disciplined bowling show by New Zealand. For the hosts, Daryl Mitchell being used as the fifth bowler was a master-stroke, picking 3/25 in his seven overs.

Adam Milne, coming in for spinner Michael Bracewell, got three wickets for 57 runs in his ten overs. Tim Southee picked two scalps while Matt Henry, despite being wicketless, gave away just 29 runs in his very effective ten overs.

After a delay of 15 minutes, New Zealand captain Kane Williamson made it a hat-trick of winning tosses and put India into batting first for the third time in the series. On a pitch with green tinge, Southee and Henry found enough movement to keep Shikhar Dhawan and Shubman Gill in check.

Though Dhawan hit a six and three boundaries by dancing down the pitch to negotiate the movement on offer, Gill was off the mark on his 12th ball. Though Gill hit Milne for back-to-back well-timed boundaries, the pacer had the last laugh as the right-hander chipped straight to square leg.

Iyer dazzled with his early drives and had a huge slice of luck when Milne dropped his catch at third man. He then brought out well-controlled pulls and cashed on the width with some fierce cuts through the off-side.

But he was losing support from the other end as Dhawan's ploy to use his feet resulted in him chopping on to his stumps off Henry. Rishabh Pant whacked two boundaries on the leg-side, but miscued a pull off Mitchell.

Suryakumar Yadav edged off Milne to slip and when Iyer miscued his loft off Lockie Ferguson, India were in a real spot of bother. It increased when Deepak Hooda fell while trying to take on a short ball, leaving India at 141/6.

But Sundar went about his innings with flick and gentle push past mid-on to collect a brace of boundaries. As Southee erred in his line, he was quick to pounce on it to place the pull through mid-wicket.

He was also aided by Chahar hitting Mitchell for two huge sixes, though he holed out to him. Sundar was serene in his front-foot drive off Ferguson and then smartly moved across to sweep past short fine leg off Mitchell Santner.