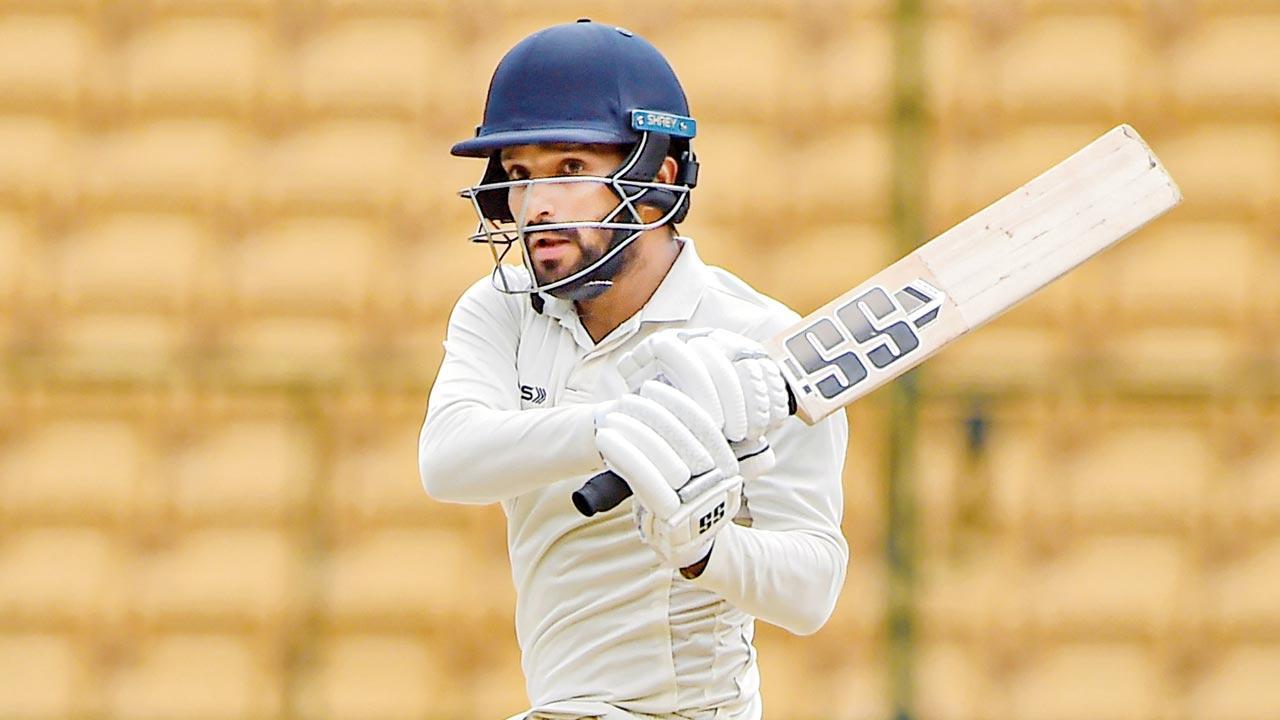 Rajat Patidar en route his 122 against Mumbai on the penultimate day of the Ranji Trophy final. Pic/PTI


For a brief while in the opening session of Day Four, Mumbai threatened to come storming back into the final of the Ranji Trophy, but Rajat Patidar and Saransh Jain had other ideas. Once they doused the imminent fire, Madhya Pradesh took a giant step towards their maiden title, opening up a potentially decisive 162-run lead in the first innings at the M Chinnaswamy Stadium on a stop-start Saturday.

Patidar’s second hundred this year and Jain’s attractive 57 helped Madhya Pradesh translate their overnight 368 for three to an imposing 536 when Shams Mulani struck for the fifth time in the innings to bring an end to their essay. It was the left-arm spinner’s sixth five-for this season, though he would have wished for better figures than 5-173. From that point, it was Madhya Pradesh’s game to lose, given how far ahead in the game they were.

In the 22 overs of play possible, Mumbai had raced to 113 for two, but still trailing by 49. Prithvi Shaw’s men will require a Houdini act on the final day if they are to stack up a 42nd title; given that they have nothing to lose, expect them to come out all guns blazing.

After an all-too-brief period of sussing out the conditions, Shaw and Hardik Tamore, opening in place of the injured Yashasvi Jaiswal, opened out. Madhya Pradesh put down three chances, though they will have taken heart from Shaw’s dismissal. The Mumbai skipper looked in the mood until he was frustrated by the wide lines employed by Gaurav Yadav and offered a catch to cover-point.

That Mumbai were only allowed a maximum possible 33 overs on a penultimate afternoon marked by two stoppages for rain was only thanks to the adhesiveness and industry of Patidar and Jain.

In the morning, Mumbai winkled out Aditya Shrivastava, Akshat Raghuvanshi and Parth Sahani in the space of 67 deliveries for 29 runs, but Patidar, resuming on 67, wasn’t in a similarly generous mood.

Having started the day with a glorious drive wide of mid-on, he delighted a crowd in the region of 500 with sustained excellence, reaching his hundred with a brace through the covers off Tushar Deshpande.

As Patidar made merry, the left-handed Jain too joined the party with crisp ball-striking of his own. It took the third new ball and a peach from Deshpande that came back in to get rid of Patidar, but the MP tail wagged long enough to prolong Mumbai’s misery and swell the lead to decisive proportions.

As if their on-field woes weren’t enough, Mumbai were dealt another unkind cut with Jaiswal [who didn’t take the field at all] and Dhawal Kulkarni going for MRI scans on a right ankle and hip respectively.