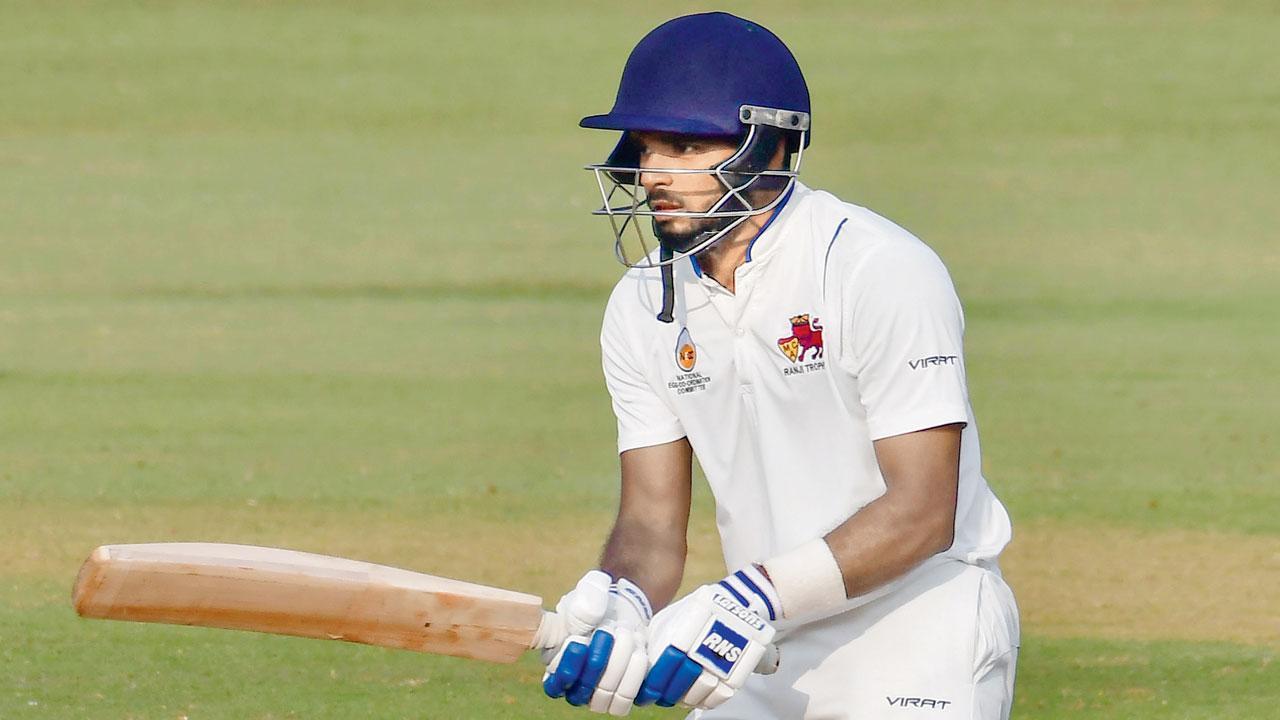 Mumbai’s Prasad Pawar during his unbeaten 99 against Maharashtra at Brabourne yesterday. Pic/PTI


Mumbai’s hopes of victory over Maharashtra in their do-or-die clash are still alive and rest on the young shoulders of wicketkeeper-batsman Prasad Pawar, 27. The right-hander, who is just one run away from his maiden century, helped the hosts to post 187-5 in response to Maharashtra’s 384 all out. Mumbai trailed by 197 runs at stumps on Day Two of their Elite Group ‘B’ Ranji Trophy match at the Brabourne Stadium on Wednesday.

Pawar was the busiest player from both camps in the last two days. After keeping wickets for one and a half day across 115 overs, he had rest for only one ball. Pawar, who batted at No. 6 against Delhi in the last game, was promoted to No. 3 in place of regular one-drop batsman Armaan Jaffer. And when Mumbai lost opener Yashasvi Jaiswal (0) off the very first ball of the innings with pacer Pradeep Dadhe (2-50) trapping him LBW, Pawar had to join debutant Divyaansh Saxena (35, 5x4).

Pawar batted sensibly even after losing partners—skipper Ajinkya Rahane (14), Jaffer (19) and Suved Parkar (20). Playing only his third first-class game, he took his time to settle down and showcased composure during his 170-ball knock in which he hit 12 fours in his four hours-plus stay at the wicket. His main area of scoring runs was in front of the wicket and played well on both sides of the pitch. The only time he looked like doing something different was when he played a reverse sweep on 98 off left-arm spinner Vicky Ostwal (1-37) and took a single. However, three balls later, Ostwal clean bowled Parkar by bowling in the rough, which ended day’s play.

“I told them [bowlers] to keep it simple—bowl a good line and length. We bowled around 30-32 overs in the last session, gave away only 60 runs and took two big wickets. We planned it that way. We knew Armaan could play big shots in front of the wicket, so we planned for that. We made Ajinkya play as many balls as possible and we were successful in that plan,” Maharashtra coach Santosh Jedhe said on Wednesday.

Earlier, the hosts had some morning joy thanks to Mumbai pacer Mohit Avasthi’s maiden fifer (5-89). First, he disturbed Saurabh Nawale’s (58) furniture; the batsman managing to add only two runs to his overnight total. Avasthi then sent back Satyajeet Bachhav (11), caught by second slip fielder Jaffer. Thanks to Mumbai’s sloppy fielding, Maharashtra added 70 runs to their overnight total of 314-6. All-rounder Ashay Palkar (66 not out), who was unbeaten on 32 on Tuesday, reached his half-century with a back foot punch for four in the cover region off Siddharth Raut. Luck was on Palkar’s side. When he was on 53, substitute fielder Dhrumil Matkar failed to convert a half chance at short cover off pacer Tushar Deshpande (2-89). Even Ostwal (17) enjoyed a life on 12 when ’keeper Pawar dropped him off the same bowler. And Bachhav had yet to open his account when Jaffer dropped him at second slip off Avasthi.