The cancellation of the series is a major setback to South Africa's hopes of qualifying directly for the ODI World Cup in India next year. However, it will reportedly free several star Australia Test cricketers to take part in the Big Bash League (BBL) 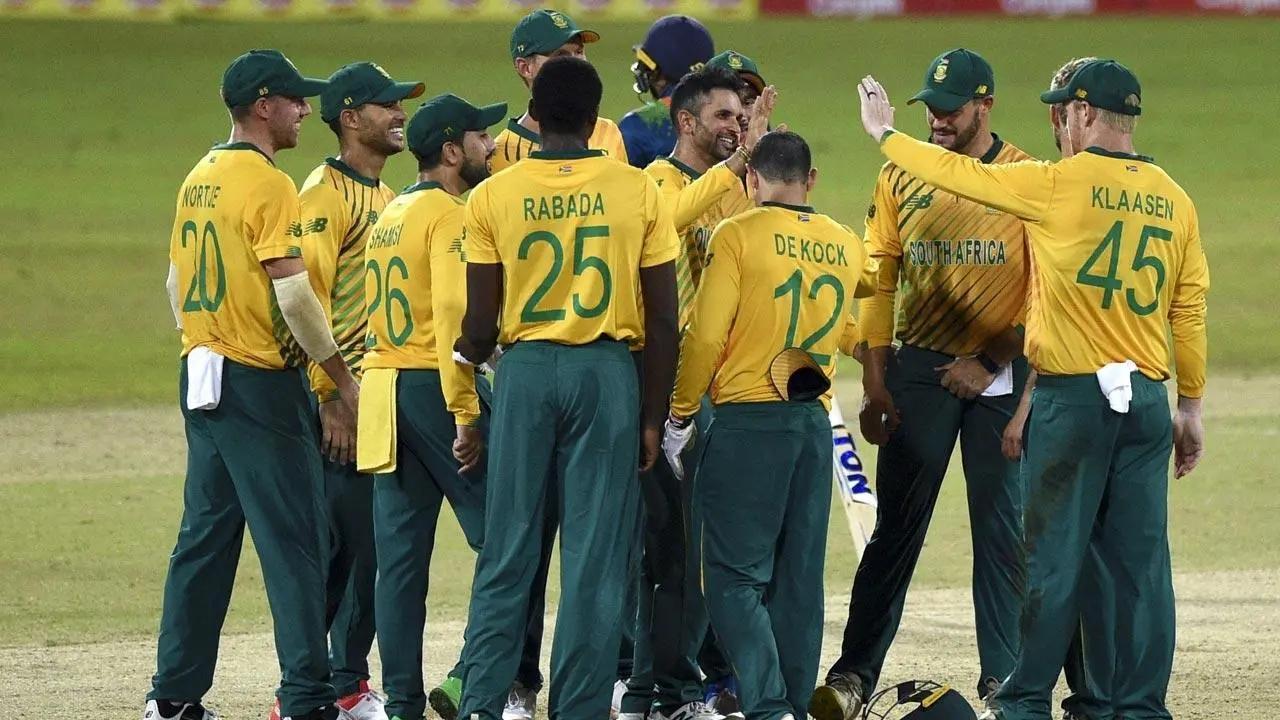 Keshav Maharaj celebrates with teammates after the dismissal of Sri Lanka's Bhanuka Rajapaksa during the 1st T20I cricket match between SL and SA. Pic/AFP


Cricket South Africa (CSA) has decided to pull out from the One-day International series against Australia in January next year as the three-match fixture is reportedly clashing with their new franchise T20 league.

CSA had earlier asked Cricket Australia (CA) to "reconsider the dates" of the three games originally scheduled between January 12-17, but Australia's cricket governing body announced on Wednesday that they had been unable to find alternative dates to reschedule the series, according to cricket.com.au.

The cancellation of the series is a major setback to South Africa's hopes of qualifying directly for the ODI World Cup in India next year. However, it will reportedly free several star Australia Test cricketers to take part in the Big Bash League (BBL).

The Proteas are currently placed at 11th spot in the ICC ODI team rankings with 49 points and their withdrawal from the series, which is a part of the Super League, will hurt their chances of qualifying directly for the World Cup in India badly.

"The Proteas have effectively forfeited the series, with CSA agreeing that because the matches won't be played before the qualification cut-off date in May (2023), the 30 competition points on offer will be awarded to Australia, pending ICC approval," the cricket.com.au report added.

The top eight teams from the 12 ICC full member countries and the Netherlands will qualify directly for the 50-over World Cup, while the remaining five teams will have a playoff against five Associate sides for the remaining two World Cup slots.

Though South Africa have ODI fixtures against world champions England and India before the May cut-off date, it will be a difficult task to climb out of the bottom five on the Super League table.

Australia currently occupy the seventh spot with 70 points (12 matches). Australia's 2-3 ODI series loss to Sri Lanka recently will have no bearing on their points' status as it was not part of the Super League fixture.

"CA said in a statement there were no alternative dates available to play the series owing to a congested international schedule due to a backlog of postponements during the pandemic, which includes the men's T20 World Cup being hosted by Australia in October-November," the report added.