MSSA U-10 Football: Cathedral 'A' triumph over 'B' team to reach final 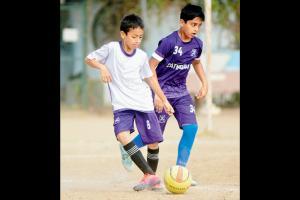 Zahan Mistry (left) of Cathedral 'A' tries to get past a Catherdral 'B' player yesterday. Pic/Bipin Kokate


It WAS a busy Sunday morning for Cathedral and John Connon's (Fort) coach Deepak Narwade as both his teams - 'A' and 'B' - played against each other for a place in the final of the Mumbai Schools Sports Association (MSSA)-organised boys U-10 football knockout tournament at Azad Maidan.

The 'A' team registered a 2-0 win thanks to strikes from Niall Goghavala (29th minute) and Zahan Mistry (30th). Narwade positioned himself on the bench situated near the half line. "For the first time in my 17-year coaching stint with this team, both sides are playing against each other. I will observe them and correct their mistakes for the next game. One team will play the final while the other will figure in the third-place match," Narwade told mid-day before the match.

The 'B' team made it difficult for their opposition to create goal-scoring opportunities. However, after a goalless first-half, 'A' adopted a more aggressive approach and scored two goals in two minutes.

The first one came in the 29th minute when Rian Uniyal carried the ball beautifully towards the right corner before passing it to Niall inside the penalty area. Niall directed it into the post, beating goalkeeper Shivaan Mittal. A minute later, Zahan doubled the score for 'A'. "The 'A' side were the better team. 'B' did well too, but in the second half, they made mistakes and conceded goals," said Narwade.