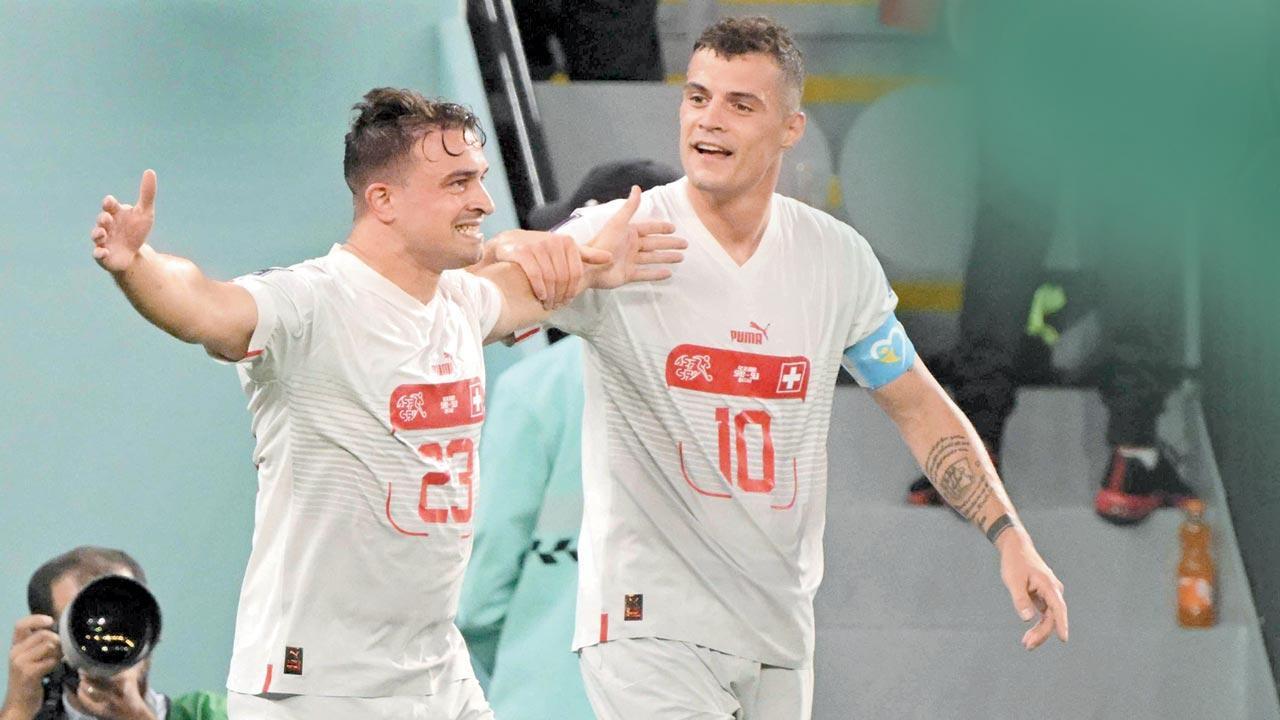 Switzerland’s midfielder maestro and skipper Granit Xhaka and hardworking winger Xherdan Shaqiri were at their best in a five-goal thriller as they overpowered an over-aggressive Serbia 3-2 in their final Group G clash at Stadium 974 on Friday night.

Shaqiri brilliantly put his team in front in the 20th minute when he firmly placed one into the Serbian net off defender Strahinja Pavlovic and sprinted towards the vociferous Serbian supporters’ section with a finger on his lips. Serbia however, turned things around quickly, with a goal each from in-form forwards Aleksandar Mitrovic (26th minute) and Dusan Vlahovic (35th min).  Nerves could have easily taken over Switzerland at this time as their opponents were on a high and aggressively chasing and tackling every ball. However, here’s where skipper Xhaka stepped in. The central midfielder marshalled his troops to a tee. He first withdrew himself a bit to re-organise his suddenly shaken-up defence. And when things slowly settled at the back, he proceeded ahead to assist his forwardline. Remo Freuler’s second-half winner (48th min) for the Swiss side and their defensive restructuring thereafter was a direct consequence of Xhaka’s reassuring presence in the middle.

All praise for the skipper

Switzerland coach Murat Yakin was all praise for his captain. “The older players like Granit [Xhaka], Richie [Rodriguez] and [Xherdan] Shaqiri carried the team today. They had fantastic assists and scored fantastic goals,” Yakin said at the post-match presser.

Xhaka was not hesitant to take on the much taller Serbian players, who were getting unnecessarily boisterous time and again, leading to Argentine referee Fernando Rapallini flashing as many as seven yellow cards to their team. Xhaka got caught in one such melee, where there was some pushing and shoving, but coach Yakin was always confident that his skipper would control the situation given the responsible leader he is. “I saw a Granit, who was fully focused on football today, and he gave a strong performance. He had a great game today, defensively as well as in attack. Also when we were 2-1 down he took responsibility, not just for individual players, but for the whole team,” he said.

Shaqiri’s performance meanwhile, was like that of a workhorse. After scoring the opener, he also provided a crucial assist for the second goal. Yakin was highly appreciative of his winger, who joined Portugal’s Cristiano Ronaldo and Argentina’s Lionel Messi as only the third player ever to have scored in the last three World Cups. “Xherdan scored and got a great assist. He was very present [throughout the match] and brought out the best in other players,” said Yakin, who substituted the forward in the 69th minute much to the player’s displeasure.

‘Proud of what we achieved’

“No player wants to be substituted. They always want to stay on, but I’m responsible for protecting my players. At that time, we were ahead [3-2] and needed to stabilise ourselves, to bring in fresh strength. He wanted to stay on until the end, but the players, who came on, brought extra energy. They slotted in well and we are all proud of what we achieved,” said the Swiss coach before adding confidently: “I don’t think Portugal [Switzerland’s second-round opponents] are looking forward to playing against us.”