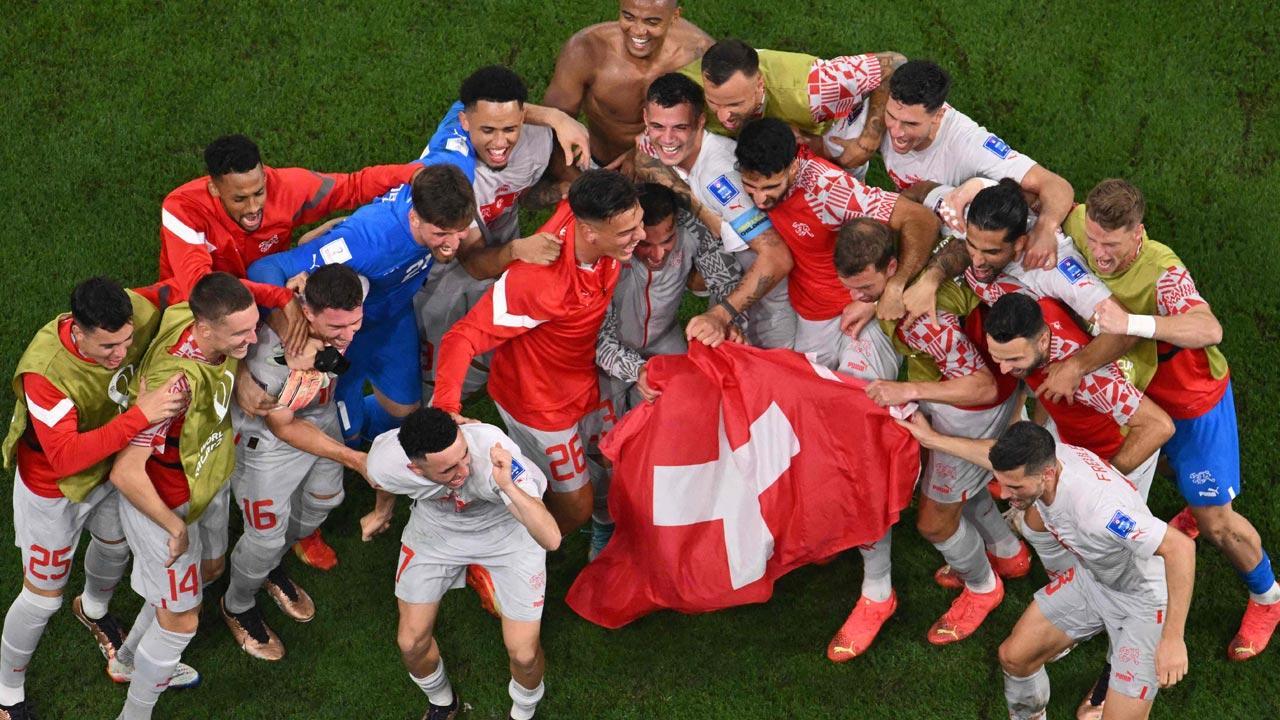 Switzerland's players their win in the Qatar 2022 World Cup Group G football match between Serbia and Switzerland at Stadium 974 in Doha. Pic/AFP


Switzerland defeated Serbia 3-2 in an electric encounter on Friday to finish second in Group G and advance to the World Cup knockout round at Stadium 974 on Saturday.

The Swiss team made it to the knockout stage for the third time in a row and will now lock horns with Portugal in the round of 16 clashes on December 7.

Xherdan Shaqiri gave Switzerland the lead in a match that ebbed and flowed at lightning speed in the first half at Stadium 974, but Serbia quickly scored twice within 10 minutes through Aleksandar Mitrovic and Dusan Vlahovic to turn the game around.

Just before the half, Breel Embolo gave the contest another twist by bringing Switzerland to parity. Remo Freuler then scored three minutes into the second half to give Switzerland a one-goal lead yet again.

Serbia equalized through a trademark Aleksandar Mitrovic header in the 20th minute after Xherdan Shaqiri had given Switzerland the lead with a deflected shot. Serbia then unexpectedly took the lead when Dusan Vlahovic found the bottom corner, briefly moving them up to second place in Group G.

Breel Embolo provided a late-game comeback for Switzerland in an exciting first half, but they soon took the lead again thanks to an outstanding team goal that Remo Freuler finished off.

Despite reports of a FIFA announcement inside Stadium 974 asking fans to halt discriminatory yells and gestures Switzerland persevered and won the game.

Granit Xhaka and Embolo both had efforts blocked by goalkeeper Vanja Milinkovic-Savic as Switzerland became the first team in World Cup history to have three shots in the opening minute of play.

Also Read: Morocco ready to ‘aim for the sky’ after fairytale run in Qatar

Despite the early scare, Serbia impressed, as Andrija Zivkovic's powerful shot from outside the area struck a post. However, it was Switzerland who broke the score when Shaqiri's attempt entered the net via a deflection.

Though Serbia continued to be in control, Mitrovic quickly brought his team even with a spectacular glancing header from Tadic's perfectly placed cross. Seven minutes later, Vlahovic took advantage of Freuler's error to score into the bottom corner, putting them in a position to advance.

The last twist would come in the first half, though, when Silvan Widmer crossed from the right and Embolo came on to side-foot in for a score of 2-2.

At the beginning of the second session, Switzerland put together a fantastic play involving Embolo and Shaqiri before Vargas passed the ball to Freuler, who quickly made up for his earlier mistake and slammed in the game's fifth goal.

Fabian Schaer's challenge caused Mitrovic to fall too easily in the middle of the second half, but the referee denied his appeals for a penalty, and the Serbian dugout spilled out onto the field to protest the call.

Serbia's replacement Nemanja Radonjic nearly scored an equalizer in the dying seconds of stoppage time as the two teams battled it out, but Switzerland held on to secure a quarterfinal matchup against Portugal on Tuesday.

Since 2014, Switzerland has advanced to the round of 16 at every World Cup and European Championship. With six points, they tied for second place with Brazil, who was defeated 1-0 by Cameroon, in Group G on goal difference.