Currently fourth in the group, Serbia now face Switzerland while Cameroon face group leaders Brazil. Serbian fans are convinced that their team will do the star-turn and progress to the next round 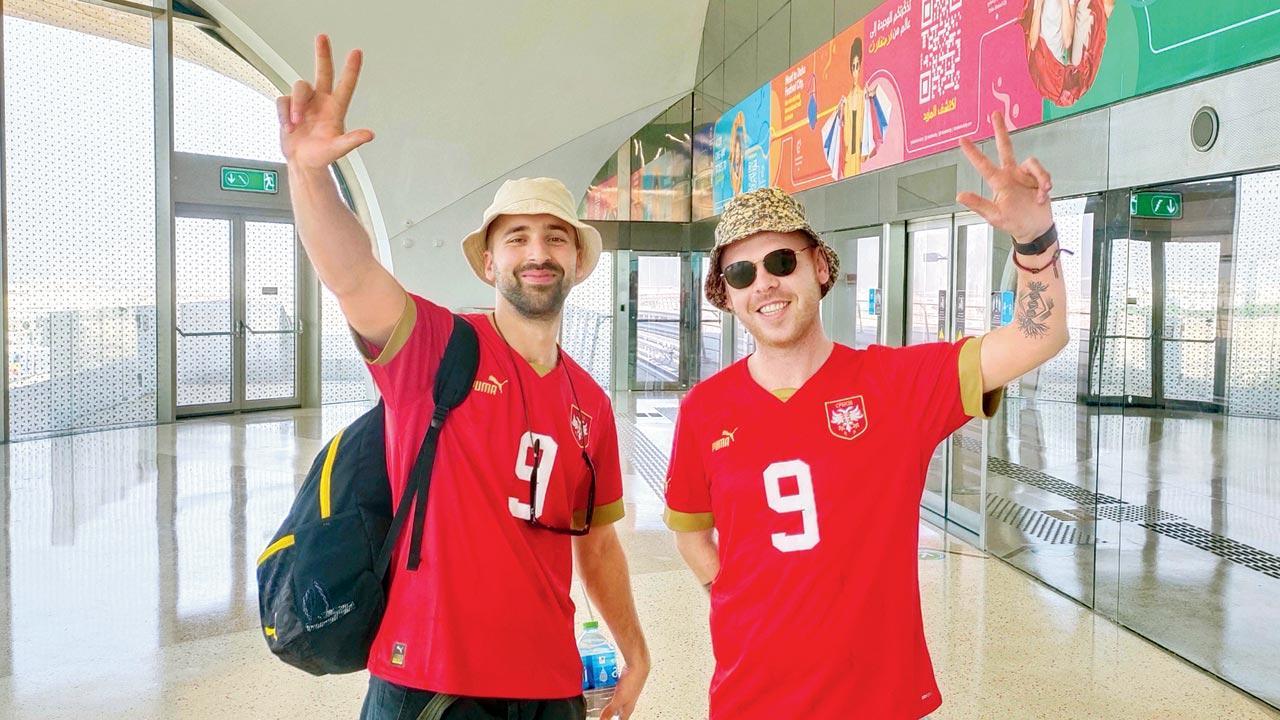 Serbia fans Luka Dragicevic (left) and Ivan Arsic after their team’s match against Cameroon at Doha on Monday. Pic/Ashwin Ferro


World No.21 Serbia have had a couple of lion-hearted performances in this World Cup so far. The first, a 0-2 loss against the mighty Brazil, but not before holding the World No.1 side for 62 minutes, before Richarlison’s brilliant brace. And the second, a fighting 3-3 draw with Cameroon on Monday.

Currently fourth in the group, Serbia now face Switzerland while Cameroon face group leaders Brazil. Serbian fans are convinced that their team will do the star-turn and progress to the next round.

“Our fate is in our hands. We have to beat Switzerland, it’s as simple as that, because, ideally, Brazil should be beating Cameroon. So we finish on four points, while Switzerland and Cameroon remain on one each,” Luka Dragicevic, 29, a sports psychologist, who lives in Nis, the third largest city in Serbia, tells mid-day.

Dragevic uses his professional expertise to explain further. “Look, football is as mental as it is physical. Against Brazil, it was our first match, we were nervous. We did not want to lose points, so we played extra defensively for a draw. And it almost worked. Against Cameroon we played attacking football and scored three. Unfortunately, we conceded an equal number, but we were in the lead for most part of the game. Against Switzerland, we have to go all out and I’m sure we will,” added Dragisevic.

His friend, Ivan Arsic, 32, a logistics manager in Nis, believes Serbia have another reason to beat Switzerland—revenge. “At the 2018 World Cup in Russia, Switzerland beat us [2-1] in the group stages, and though we beat Costa Rica first-up, we lost to Brazil and got knocked out. But I remember, we had scored first against the Swiss through Mitrovic and he is in fine form here too. So I’m expecting him to score again. We will fight and win this one and it will be sweet revenge,” said Arsic.