Neymar’s ankle injury only provides Brazil a slew of emotions to deal with as their superstar is reportedly ruled out of the group stage; decision to stay on for 11 minutes after getting injured against Serbia may prove costly 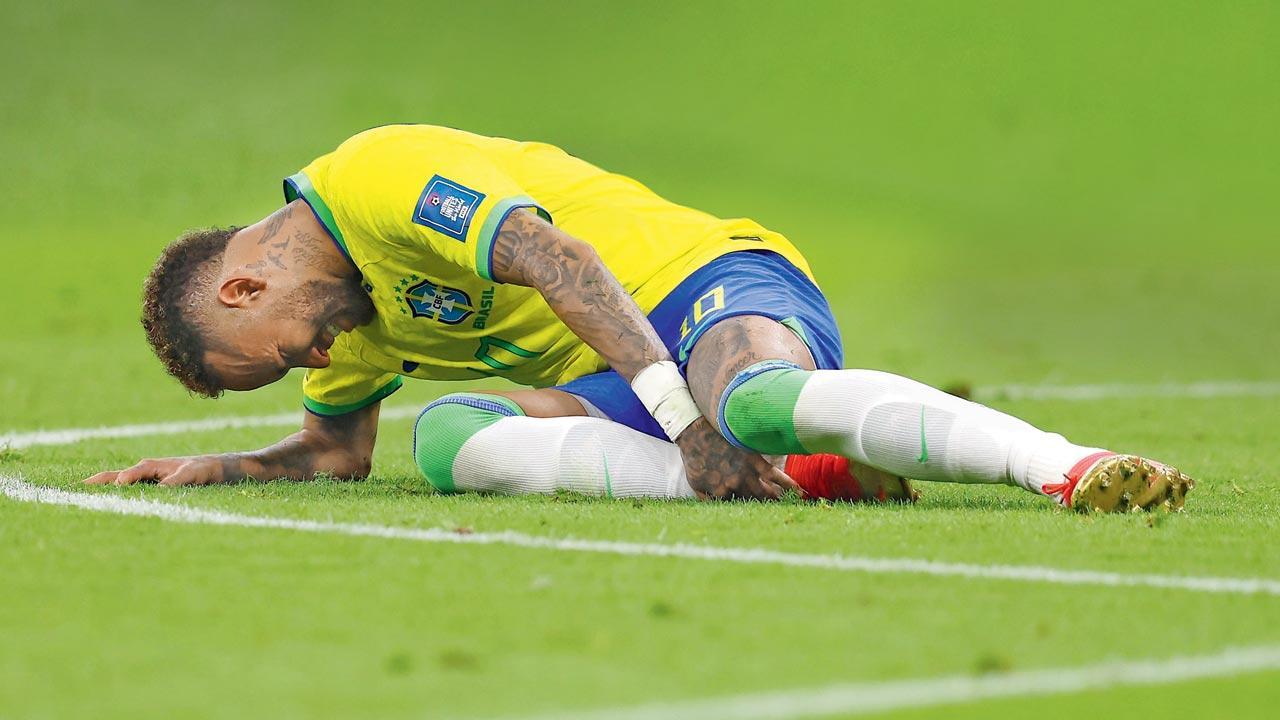 Brazil’Neymar lies injured during the match against Serbia on Thursday. Pic/Getty Images

Brazil's enigmatic striker Neymar, 30, had urged the country’s football-crazy fans via a social media post on Friday to “have faith” soon after he hobbled off the pitch during his team’s 2-0 win over Serbia.

However, Brazil’s team doctor Rodrigo Lasmar has now revealed, following tests, that he will miss the team’s second World Cup game against Switzerland on Monday as the ankle injury he suffered following a tackle by Serbia’s Nikola Milenkovic on a night, where he was the most tackled player (nine times), had not healed. Some reports even suggest that the PSG star may miss the remainder of the group phase and will return to World Cup action only if Brazil qualify for the second round.

In a social media post on Saturday, Neymar expressed his disappointment at “one of the most difficult moments in his career.” The striker wrote on Instagram: “Today is one of the most difficult moments of my career...and again in a World Cup. I have an injury, yes, it’s annoying, it’s going to hurt, but I’m sure I’ll have the chance to come back because I’m going to do my best to help my country, my teammates and myself.”

Unfortunately, Neymar has come in for some scathing criticism from some cynical fans online, who claim that his injury-prone situation tends to time and again hurt the team. In the 2014 edition, Neymar suffered a fractured lumbar vertebrae after Colombia’s Camilo Zuniga kneed him in the back in their quarter-final. It immediately ended his World Cup. Germany then embarrassed the host nation 7-1 in the semi-finals.

On Saturday, Neymar’s Brazil teammate Raphina also took to social media to defend his striker. “Argentina fans treat Messi like a God. Portugal fans treat CR7 like a king, but Brazil fans encourage Ney to break his leg. The biggest mistake for Ney is being born in Brazil. This country does not deserve his talent,” Raphina wrote on Instagram.

Neymar suffered his injury towards the latter part of the second half. However, instead of leaving the pitch immediately for treatment, coach Tite revealed that he played on through the pain for another 11 minutes before eventually being substituted with 10 minutes remaining. This could have possibly aggravated things as it is now learnt that he has a damaged ligament that could have benefitted from immediate treatment.

Following the Switzerland fixture, Brazil face Cameroon in their final Group G game on Friday (December 2). Though the three points from the victory against Serbia puts them in a good position to go through, they will still need at least another win from their two remaining two games to ensure qualification.

Unfortunately for them, their star striker will be cooling his heels or in this case, ankle [with ice as informed by the team management], while his team sweat it out to make it to the Round of 16.

Next Story : Neymar can rest and return fit: Figo