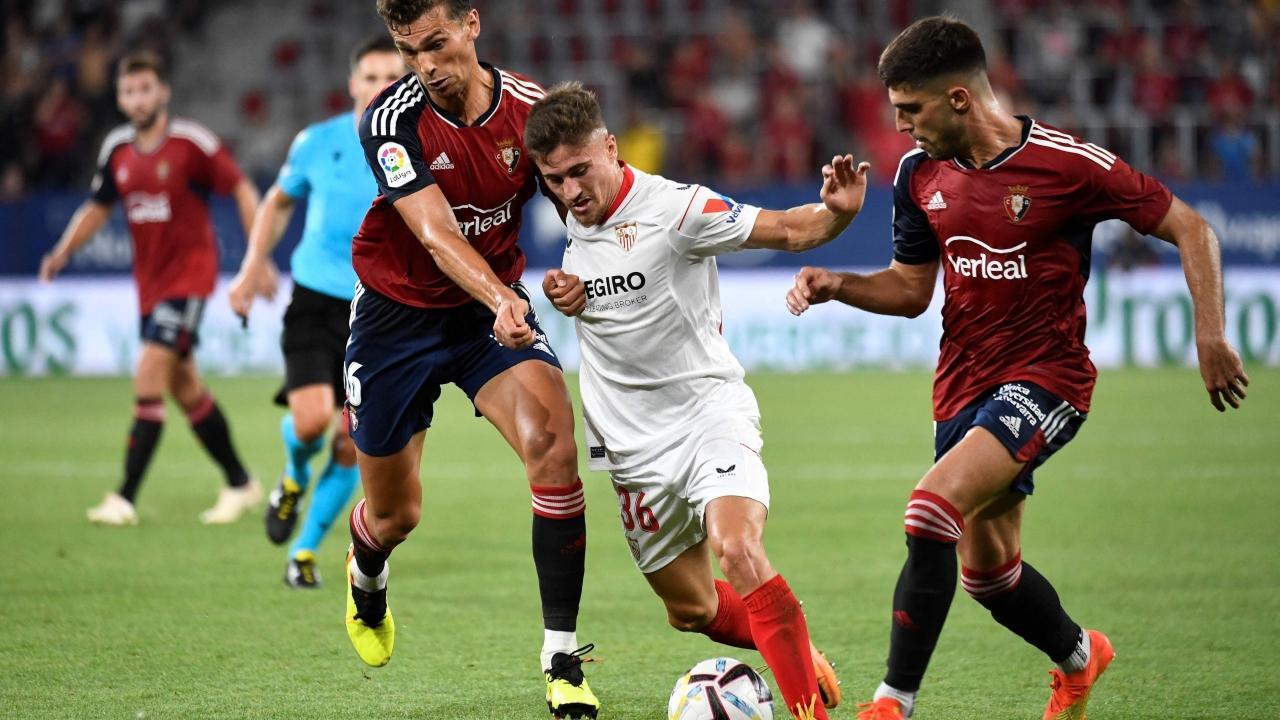 Ivan Romero fights for the ball with Lucas Torro during the La Liga game between CA Osasuna and Sevilla FC. Pic/ AFP


The Spanish season kicked off with Osasuna beating Sevilla 2-1 at home in an opener that was decided by a borderline penalty similar to the type that Spain's referees had pledged to eliminate.

Aimar Oroz converted a spot kick for the 74th-minute winner after the referee ruled that Sevilla midfielder Papu Gómez committed a foul in the area.

Chimy Ávila scored the first goal of the 2022-23 season in the ninth minute when he smashed a powerhouse header off goalkeeper Yassine Bounou and into the net.

Rafa Mir responded for Sevilla two minutes later when he rifled in a pass to the near post by Gómez.

Both sides hit the woodwork with long shots before Oroz tilted the game the hosts' way in Pamplona.

Sevilla coach Julen Lopetegui questioned the penalty, which was called after Jon Moncayola fell following a brush with Gómez. Lopetegui said it was difficult to understand especially after Spanish referees had met with teams this summer to say that they would raise the bar on what constituted a penalty.

"We had a meeting recently with referees whose central argument was that they no longer would call these little penalties ¿ so it is difficult to understand," Lopetegui said.

"In the meeting we had they told us completely the opposite."

Sevilla finished the league in fourth place last season, qualifying for the Champions League. But Julen Lopetegui's squad has been weakened following the exit of Diego Carlos and Jules Koundé, who formed one of the best pair of central defenders in the league.

Karim Rekik and Nemanja Gudelj, both mostly used as backups last season, played in their place. They settled in after a shaky start when Osasuna pressed for the opener that soon came when Ávila slipped behind Gudelj to meet a cross at the far post.

New forward Alex Telles started for Sevilla. Isco Alarcón, Sevilla's star signing from Real Madrid, was left off the squad as he trains to get into full fitness.

But Lopetegui has said that he hopes sports director Ramón Monchi Rodríguez, an expert at discovering talent at a good price, will reinforce his squad before the summer market closes at the end of the month.

Next Story : Big loss for Lionel Messi as he misses Ballon d'or cut