Qatar to bid for 2032 Olympics

India, Australias Queensland state, the Chinese city of Shanghai and a potential joint bid between South and North Korea are also being touted for the 2032 summer games 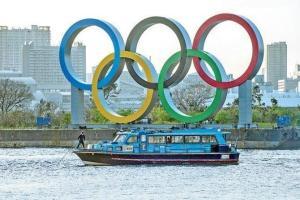 A man anchors his boat in front of the Tokyo 2020 Olympic rings in Tokyo, Japan. The Games have been postponed to next year. Pic/Getty Images


Qatar will seek to host the 2032 Olympic Games, it said on Monday, joining a crowded field and raising questions about scorching summer temperatures and underwhelming attendances at past events. India, Australia's Queensland state, the Chinese city of Shanghai and a potential joint bid between South and North Korea are also being touted for the 2032 summer games. Under changes put forward in 2014, interested countries submit a request to join the non-committal "continuous dialogue", which Qatar confirmed to AFP it had done via a letter to the International Olympic Committee (IOC) in Lausanne.

"Today's announcement marks the beginning of a meaningful dialogue with the IOC's Future Host Commission to explore our interest further and identify how the Olympic Games can support Qatar's long-term development goals," Qatar Olympic Committee president Sheikh Joaan bin Hamad bin Khalifa Al-Thani told AFP in a statement. Qatar unsuccessfully bid to host the 2016 and 2020 games, having proposed to host the former in October without first clearing it with the IOC. It won a waiver to propose hosting the 2020 games, a joint bid with Baku, Azerbaijan, between September 20 and October 20, but failed to make the shortlist. The 2020 games, postponed to 2021 because of the coronavirus pandemic, were awarded to Japan, which also experiences searing summer temperatures, leading officials to schedule events early in the morning when conditions are coolest.

"Qatar has earned the reputation of a world-class destination for major sporting events," added Sheikh Joaan, brother of Qatar's ruler Emir Sheikh Tamim bin Hamad Al-Thani. "It is this proven track-record and wealth of experience, along with our desire to use sport to promote peace and cultural exchange, that will form the basis of our discussions with the Commission." Summer temperatures can reach 50 degrees celsius (122 degrees Fahrenheit) in the nation which abuts the Arabian desert. Heat and humidity were major issues during the road races at last year's World Athletics Championships held in Doha. The event was shifted to late September and October over concerns about the gas-rich state's climate and marathons and race walks were held at midnight. Even so, humidity hovered around 73 percent and the temperature was 33 degrees Celsius (91 degrees Fahrenheit) for much of the women's marathon and images of the runners collapsing and gasping for air led to questions over Qatar's suitability to host outdoor events outside the cooler winter months.

'Huge interest'
Perhaps the most stinging off-track criticism of the 10-day World Athletics event was sparked by the spectacle of a near-empty stadium during the opening days, raising fears for World Cup attendances in 2022 and at other sporting events. IAAF President Sebastian Coe said he was more worried about conditions at the Tokyo Olympics, where summer temperatures have pushed organisers to schedule events for the early morning. Qatar will host the 2022 World Cup after a bid process that has been attacked by some European nations and media outlets as corrupt, although Doha insists it won fairly. Discriminatory labour practices and human rights issues facing the migrant labourers building infrastructure for 2022 have been subject to intense scrutiny and criticism since Qatar won the bid in 2010.

"We in the International Olympic Committee are happy with the huge interest in the 2032 Summer Olympics, 12 years before the launch of the games. We are in a great position," IOC president Thomas Bach said in an interview with Qatar-based broadcaster BeIN on Friday. "We made sure that our new approach to this kind of intentions works well. We launched a dialogue between the interested national Olympic committees and a special commission in the IOC. Naturally, we welcome Qatar to join this dialogue." If Qatar were successful, it would be the first time the event had been held in the Middle East.