Breaking News
Job racket: Indian agents in Dubai hiring men for Myanmar
Mumbai: With no bow and arrow, both Shiv Senas wage war of words
Bandra-Worli sea link accident: Driver was distracted as he was plugging charger, say police
Despite big gatherings, Mumbai saw drop in Covid-19 cases
Mumbai: Bandra-Worli sea link staffer, who saved many from suicide, run over at accident site
Home > Sports News > Other Sports News > Article > Roman Reigns is back in the WWE updates fans on battle with leukemia

Roman Reigns is back in the WWE, updates fans on battle with leukemia

Roman Reigns relinquished his WWE Universal Championship after making an emotional announcement in the ring about suffering from leukemia back in October last year. 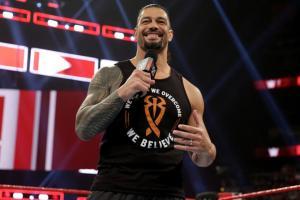 
Roman Reigns made an appearance on Monday Night Raw in the WWE on February 25, 2019. The WWE superstar announced in October 2018 that he was suffering from leukaemia.

Roman Reigns relinquished his WWE Universal Championship after making an emotional announcement in the ring about suffering from leukemia back in October last year.

On Monday Night Raw, fans went crazy as Roman Reigns roared from the ring "the Big Dog is back"

"We didn't just swing for the fences man, we hit a home run. So when I tell you this, I'm so grateful, so humbled and so honoured to announce this - the good news is I'm in remission y'all."

"With that being said, the Big Dog is back. Before I go I'm gonna say it - thank you so much you all. I love you all," Reigns announced standing in the same ring, where he had announced the relapsing of his leukaemia.

The Big Dog is BACK! #RomanReigns announces that he is in remission and back on #Raw! @WWERomanReigns pic.twitter.com/yHQdiFH2Ty

Roman Reigns is a four-time world champion in WWE, having held the WWE World Heavyweight Championship three times and the Universal Championship once.

Here are a few reactions on Twitter to Roman Reigns' comeback:

Roman Reigns is officially back to @WWE & announces he's in remission for leukemia. I am not crying, you are. #RAWAtlanta #RAW #RomanReigns pic.twitter.com/Z4aoVyUEm7

Waking up to see that @WWERomanReigns is in remission and officially back in WWE has really given me the boost I needed today. We FIGHT, we OVERCOME, we BELIEVE. #TheBigDogIsBack #ThankYouRoman #TheRomanEmpireWillRiseAgain ðu00c2u009fu00c2u0092ªðu00c2u009fu00c2u008f½ @Karen_64

Well, whilst we are glad that Roman Reigns has made a comeback, we hope he has not hurried his return and becomes fully fit before competing in the ring.