French Open: Daniil Medvedev moves to fourth round with win over Miomir Kecmanovic

Medvedev was dialled in from the start on Court Suzanne Lenglen, striking his groundstrokes with purpose in a commanding first set performance. He broke Kecmanovic twice as the Serb struggled to settle, particularly on his forehand side 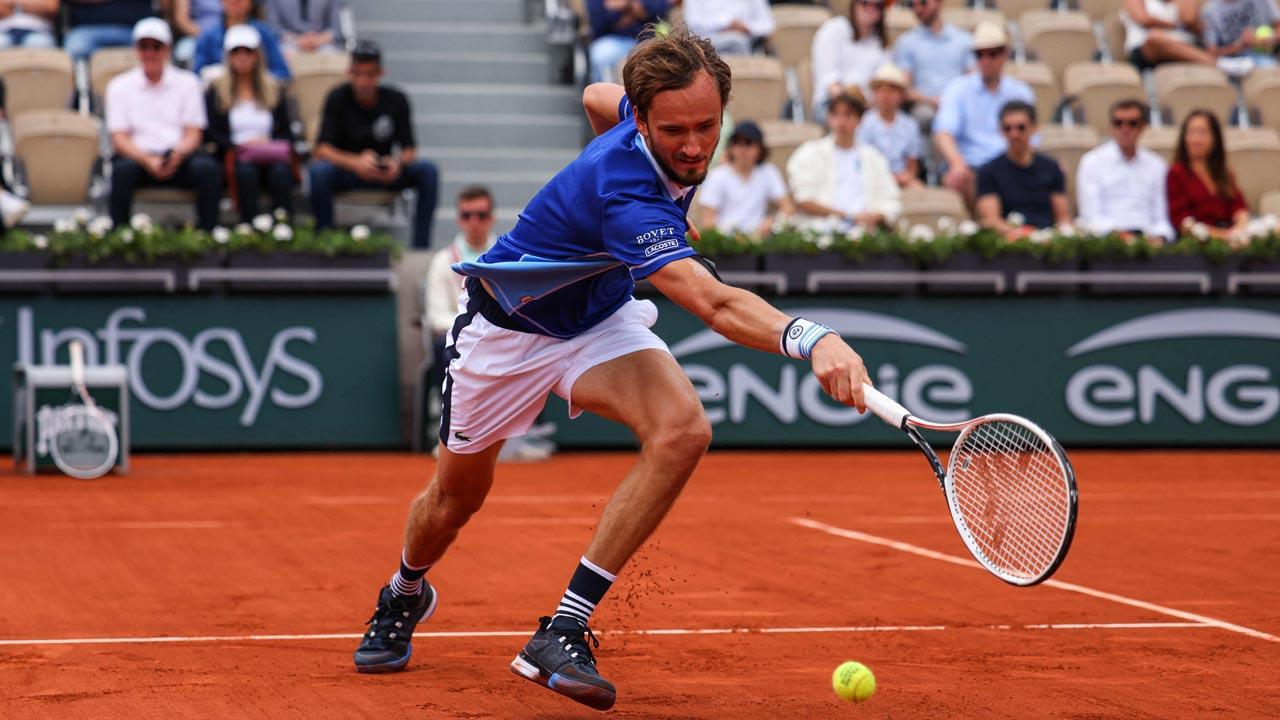 Daniil Medvedev returns the ball to Serbia's Miomir Kecmanovic during their men's singles match on day seven of the Roland-Garros Open tennis tournament at the Court Suzanne-Lenglen in Paris. Pic/ AFP


Continuing his impressive form, World No. 2 Daniil Medvedev beat World No, 31 Miomir Kecmanovic 6-2, 6-4, 6-2 to reach the fourth round of the French Open, here on Saturday.

The 26-year-old Russian was taking on one of the in-form players on the ATP Tour in the 22-year-old Serbian, but that didn't seem to affect him as he produced a sublime display featuring clean baseline hitting, precisely placed drop shots and authoritative net coverage to ease to a one-hour, 48-minute victory.

Medvedev was dialled in from the start on Court Suzanne Lenglen, striking his groundstrokes with purpose in a commanding first set performance. He broke Kecmanovic twice as the Serb struggled to settle, particularly on his forehand side.

The second seed's momentum showed no sign of slowing into the second set. He broke Kecmanovic immediately to edge ahead, and although the Serb found some rhythm on serve to reel off three consecutive holds to love and exert some pressure on his opponent, Medvedev had all the answers.

The World No. 2 held firm to seal the second set and ran away with proceedings in the third as he maintained a high level until the end to seal a statement win on the clay. His fourth-round opponent will be home favourite Gilles Simon or 20th seed Marin Cilic.

On the other hand, Kecmanovic has enjoyed a strong 2022 season and came into his first tour-level meeting with Medvedev owning a 25-11 match record for the year. But the Serb was given few chances to make an impact against a barrage of clean hitting from his opponent. Medvedev struck 42 winners to Kecmanovic's 24, breaking the Serb five times and saving each of the two break points he faced.

After losing his first four main draw matches at Roland Garros from 2017 to 2020, Medvedev is now a win away from reaching a second consecutive quarter-final in the French capital. If he makes it to next week's final at Roland Garros, he will return to No 1 in the ATP Rankings on 13 June.

Next Story : After gymnast Ashish Kumar's complaint on "partiality" at trials, Sports Authority of India asks GFI for report