Neeraj Chopra: ‘It will happen this year’

Javelin star Neeraj Chopra confident of breaching the 90m barrier after falling short by a whisker to bag silver at the Diamond League Meet; betters his own national record with 89.94m 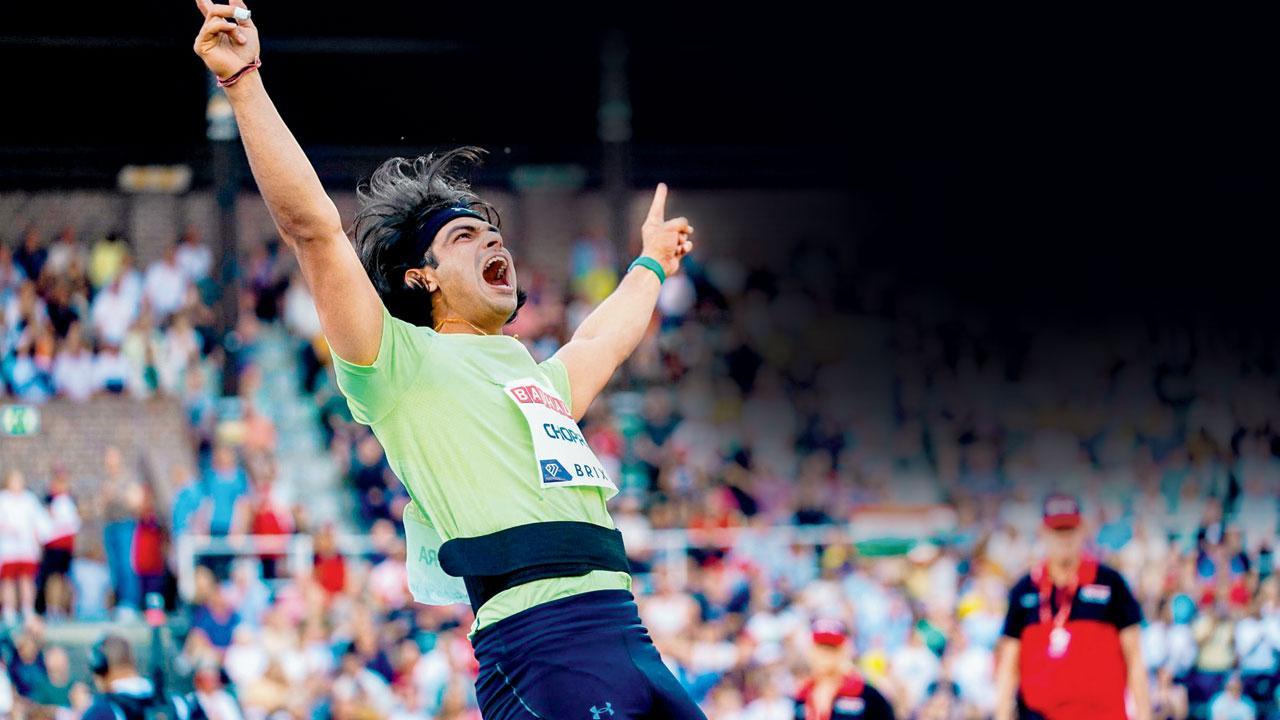 India’s javelin thrower Neeraj Chopra is ecstatic after setting a national record during the Diamond League Meet at Stockholm on Thursday. Pic/PTI


Olympic champion javelin thrower Neeraj Chopra is confident of breaching the elusive 90m barrier this year, but he’s not thinking about the coveted mark going into the World Championships as he feels that would lead to extra pressure. The 24-year-old is within touching distance of the coveted 90m mark, considered the gold standard in the world of javelin throw.

In his three outings this season, Chopra has improved his personal best twice—he recorded a 89.30m throw last month at the Paavo Nurmi Games before sending his spear to 89.94m, just 6cm shy of 90m, at the Diamond League Meet here on Thursday. “I feel good and after the first throw, I thought I could throw even over 90m today. But it is okay as I have more competitions coming this year,” Chopra said after his second place finish. Chopra’s opening throw of 89.94m bagged him his first podium finish at the Diamond League.

“I am close to 90m now and I can throw it this year. Despite the fact that I did not win tonight, I feel very good because I did my best.” Chopra finished second behind Grenada’s Anderson Peters, who had a best throw of 90.31m in his third attempt. “When Anderson Peters crossed 90 metres, I too felt that I had to do it. I had that in mind that everything should be perfect, the javelin should go in one line and the technique should be perfect. When everything is perfect then only you can throw such long distance,” the Indian said.

“There was competition, but I am happy that all my throws were quite good. I am happy with the performance. I am playing after a long time and will look to give my best in the next competition.” Chopra will next compete at the World Championships to be held in Eugene, USA from July 15 to 24. “I will come to know about that [form] in Oregon. Every competition, every day is different.

“When I start playing in Oregon, I will get to know if I am feeling the pressure of being an Olympic champion. “I play with a free mind, pressure is not in my mind. I train hard and try to give my 100 per cent in every competition,” he said. The Haryana athlete, who has made a strong start to the season, said he will not be changing his training method for the Worlds. My next is Oregon—the World Championship. It’s not far away, so we won’t change anything. But will continue to improve the training.”

The legendary Anju Bobby George is the only Indian to have won a World Championships medal in athletics with a long jump bronze in the 2003 edition. “There is no pressure that India has only one medal. Not thinking much about what to do at the World Championships. There is not much pressure now, but will see how the mindset is once I reach there. We will try our best,” he said.

Next Story : PV Sindhu loses to nemesis Tai Tzu, Prannoy out too