French Open champion Swiatek extended her streak but her latest win came after an extended struggle. Poland's Swiatek overcame Dutch lucky-loser Lesley Pattinama Kerkhove 6-4, 4-6, 6-3 in the second round of Wimbledon on Thursday 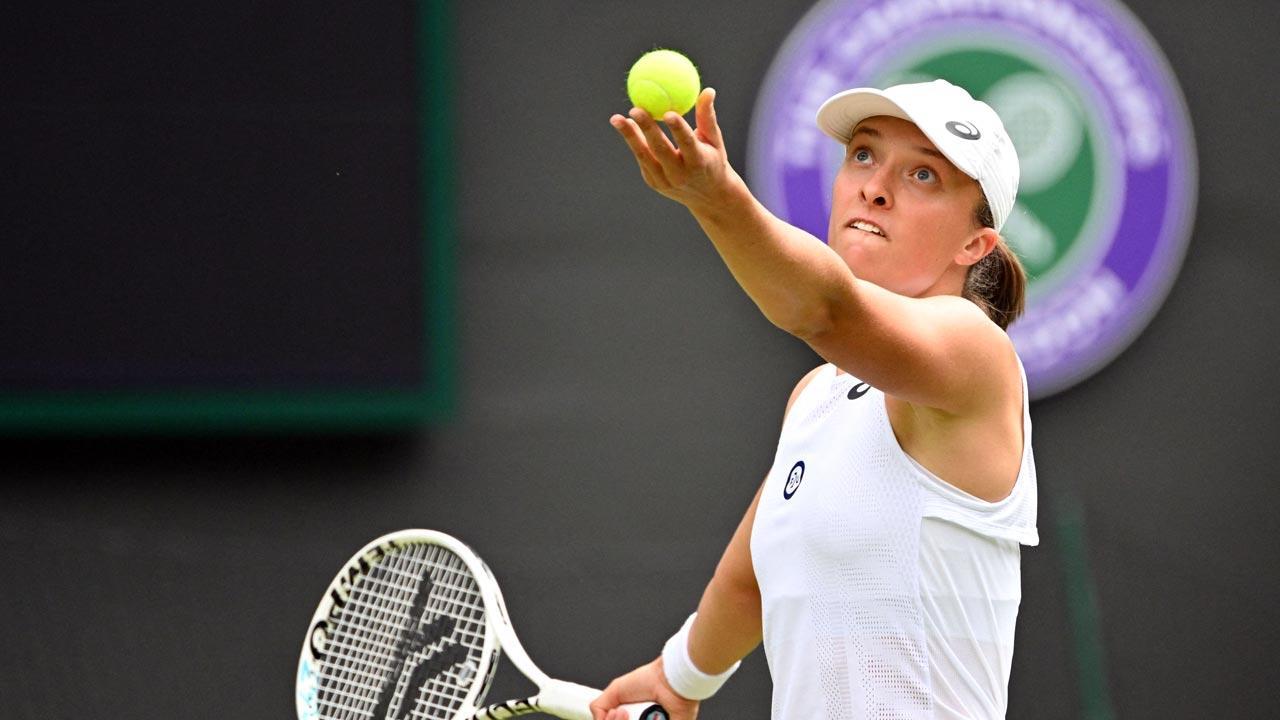 Poland's Iga Swiatek serves to Netherlands' Lesley Pattinama Kerkhove during their women's singles tennis match on the fourth day of the 2022 Wimbledon Championships at The All England Tennis Club in Wimbledon, southwest London. Pic/AFP


World No 1 Iga Swiatek, going through a big win-streak, recorded her 37th successive victory while local youngster Katie Boulter rallied from a set down to beat last year's finalist Karolina Pliskova in women's singles second-round action at the Wimbledon on Thursday.

French Open champion Swiatek extended her streak but her latest win came after an extended struggle. Poland's Swiatek overcame Dutch lucky-loser Lesley Pattinama Kerkhove 6-4, 4-6, 6-3 in the second round of Wimbledon on Thursday.

Nine days after knocking Pliskova out of the Rothesay International at Eastbourne in the second round, Boulter repeated the feat on Wimbledon Centre Court, scripting a 3-6, 7-6(4), 6-4 win over against the Czech, the 2021 finalist and No.6 seed. Boulter thus made it to the third round at a Grand Slam for the first time.

Boulter will face Harmony Tan, Serena Williams' first-round conqueror, up next; the Frenchwoman followed up her opening stunner with a 6-3, 6-4 win over No.32 seed Sara Sorribes Tormo.

Another British player, Heather Watson also made it to the third round, finishing off China's Wang Qiang 7-5, 6-4 earlier on Thursday in a match that was suspended late Wednesday due to darkness.

Also Read: Sania Mirza-Lucie Hradecka ousted in Round One of Wimbledon

Two-time champion Petra Kvitova and No. 4 seed Paula Badosa of Spain won their respective women's singles second-round matches in contrasting styles as they set up a tantalising third-round clash.

Czech Republic star Kvitova, who won the title in 2011 and 2014, had to quell a second set fightback by Ana Bogdan of Romania to win 6-1, 7-6(5) while Badosa enjoyed a relatively easier time in beating another Romanian Irina Bara 6-3, 6-2.

Elena Rybakina edged past Bianca Andreescu in straight sets, 6-4, 7-6(5) -- the latter rallying from 6-4, 5-3 down to eventually force a tiebreaker. But the former U.S Open winner Andreescu never found enough sustained momentum to make a push for a decider.

Barbora Krejcikova's injury-plagued 2022 season has taken a step forward at Wimbledon. With a 6-3, 6-4 win over Switzerland's Viktorija Golubic, the Czech sealed back-to-back wins for the first time since the Australian Open. Sidelined from February to May with an elbow injury, Krejcikova lost in the first round of her title defense at Roland Garros, and was also bounced in Round 1 in Eastbourne after recovering from COVID-19.

On the back of her win in Paris last year, Krejcikova lost to eventual champion Ashleigh Barty in the last 16 at Wimbledon. Up next, she'll face another Aussie: Ajla Tomljanovic, who was a quarterfinalist last year and also lost to Barty.