This Naagin's bite is saucy

India's first indigenous hot sauce is here. We speak to the makers about its genesis and where do they see it going. 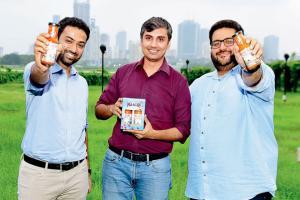 
We are at the mini club at Mahalaxmi Racecourse on a particularly wet monsoon evening. This writer is soaked and tired, but then is saved by the boys behind Naagin. Nope, it's not the production team behind a cheesy movie about an ichhadhari naag (mythical shape-shifting snakes), but three forward-thinking Mumbai blokes, thanks to whom we now have an Indian hot sauce.

"Mikhel and I went to boarding school together, and we have had many ideas together that we have aborted during the years. One day I mentioned hot sauce and his eyes lit up. And then he said 'let me tell you about Naagin'. He had already bought a domain name for the business!" says Kshitij Neelakantan, co-founder. "Well, I wasn't wrong!" laughs Worli resident Mikhel Rajani, who is also behind names such as Francesco's Pizzeria and Mandala, a delivery service that serves organic, health food. They have ordered hot French fries and chilli cheese toast to try with their aptly-titled hot sauce which comes in two flavours—the Bhoot (made of the northeast's famed Bhut jolokia—the world's hottest chili pepper) and the Original (made from Sankeshwari Chilli from Kolhapur, Maharashtra).

"Try the Original first, because after the Bhoot, you won't be able to feel your tongue anymore," says Neelakantan. "No, don't say that! It's not like that," says Arjun Rastogi, who along with completing the trifecta behind Naagin, co-founded DoubleThink Media with Neelakantan, a content-led marketing consulting firm that specialised in helping brands communicate more directly and effectively with their consumers.

Back at the table, we dip the fries into the Original and we can taste the garlic, and we find ourselves taking a chatkara. It takes us back to our childhood—the 90s kid trying Uncle Chips with Maggie Hot and Sweet. Nostalgia. It's the first day of our diet, but we have a few more fries, with a generous splash of the sauce. The back of our throat now is feeling warm, almost like after a swig of whisky.

Next, we dip the cheese toast into the Bhoot, and all three look at us with curious eyes. Oh, it's ok, oh, no, it's not, oh, it's hot! But not that hot that you can't enjoy it. "So we have had people trying it with everything. Thai Red curry is the most unexpected one for me!" says Neelkantan. "Dal, dude. Nothing beats that. Also, mango and hot sauce," says Rajani, and Rastogi adds, "Once the bottle ends, people add water to the bottle desi style, and then add that to their Maggi.

I went to a Gujju friend's house and they put it on their bhutta with ghee, salt and pepper. It's actually bl***y brilliant. And poha too!" The 90s kids in them realises that one way to make the sauce succeed is to make it something you recognise, but still something that has an innovative kick. Since all have studied abroad, they also have been exposed to the hot sauces of the world. As Rajani says, "We realised there was a space for a product like this—India has a reputation for spicy food, we love it, we are obsessed—why aren't we doing this? We think this has the capability to go international." Brand men Neelkantan and Rastogi knows that there is a sub-culture potential as well.

"You capture the things you remembered from your childhood. It has that garlicky, tomato-ey, curry-based element with the heat. Indians need the sweaty feeling. That's when you know the food is good," says Rajani, and we feel that. Ask them how many tries did it take them to get the sauces right, and they say, 63. You, though, will only need maybe a couple to get addicted. Their website went live last week, and for your fix, you can log on to naaginsauce.com.

Also read: Whip it up yourself

Next Story : Bigg Boss Marathi 2 is classier and naughtier