Every woman's story, Korean ya Indian

Day after molestation attempt in busy Khar, Hyojeong Park returns to Mumbai’s streets accompanied by mid-day to narrate reactions that have disappointingly but predictably ranged from, “who roams that late!” to “you were too friendly with strangers” 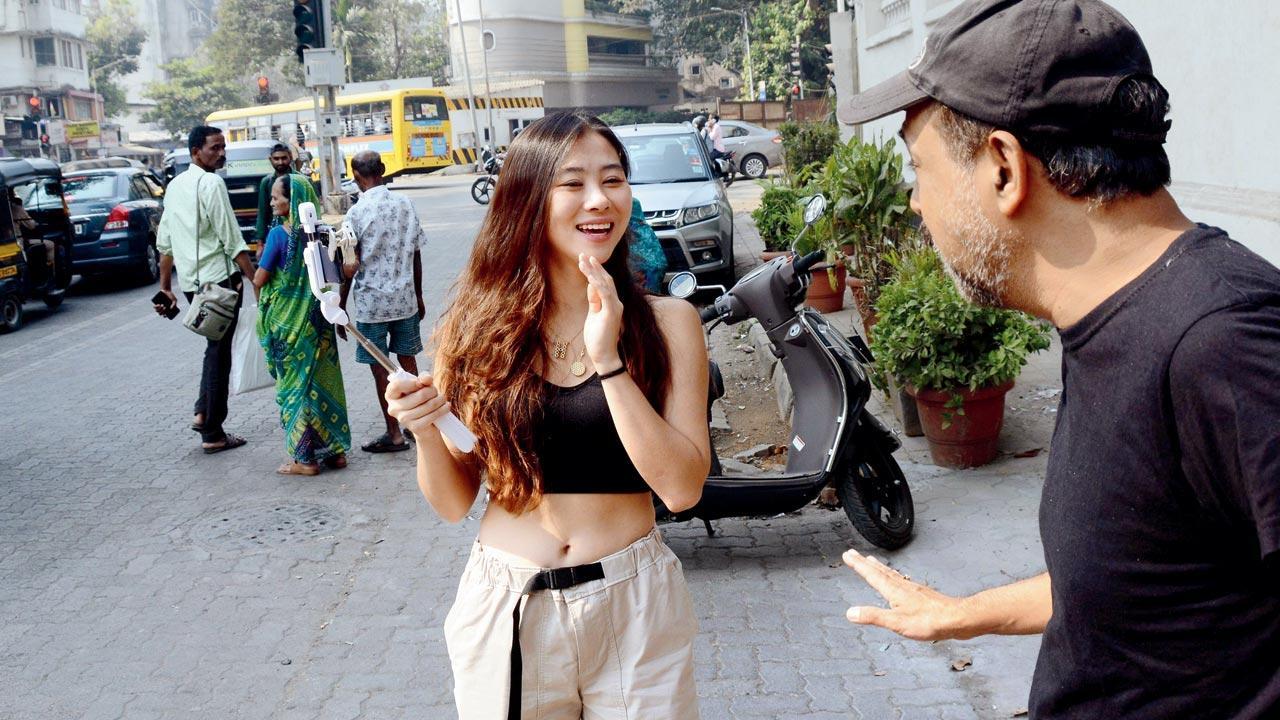 Live-streamer Hyojeong Park, 24, interacts with people in Khar West, not far from where she was sexually assaulted by two men on November 29. Pic/Sayyed Sameer Abedi


When we meet Hyojeong Park at a coffee shop in Khar West on Friday afternoon, she is in the middle of her second cuppa of the day and juggling two phones, the one attached to a unipod is streaming her live on streaming platform Twitch.

She greets us with a wide smile, enters an online interview and simultaneously types on Twitch chat. When our turn comes, her voice is hoarse. She has been speaking to the media continuously since the day before. The 24-year-old from South Korea is a professional live-streamer and was broadcasting live when two men forced themselves on her on November 29 at SV Road in Khar West. The clip went viral, and on Thursday, the Khar police charged and arrested Mobeen Chand Mohammad Shaikh and Mohammad Naqeeb Sadrealam Ansari for sexual assault. “I still love India,” she clarifies mid-way through our chat. “What happened to me could have occurred anywhere in the world, and it is not going to be the only [India] memory I hold on to.”

Since then, the conversation has taken a turn into blaming Park for “inviting” the assault by “being too friendly”.  According to latest NCB figures, despite Mumbai safe city image, Maharashtra ranked third in nationwide statistic for crime against women, with Mumbai following Delhi at number 2. It echoes other horrific public assaults: That of a mob engulfing an NRI woman at the Gateway of India, stripping and groping her on New Year’s eve 2006 (mid-day photojournalist Shadab Khan broke the story). On January 1, 2008, 14 men striped, groped and molested two women outside JW Marriott in Juhu. In March 2014, a dozen young men groped and nearly undressed an 18-year-old on a street in broad daylight. When she sought refuge in a nearby restaurant, the manager threw her out. 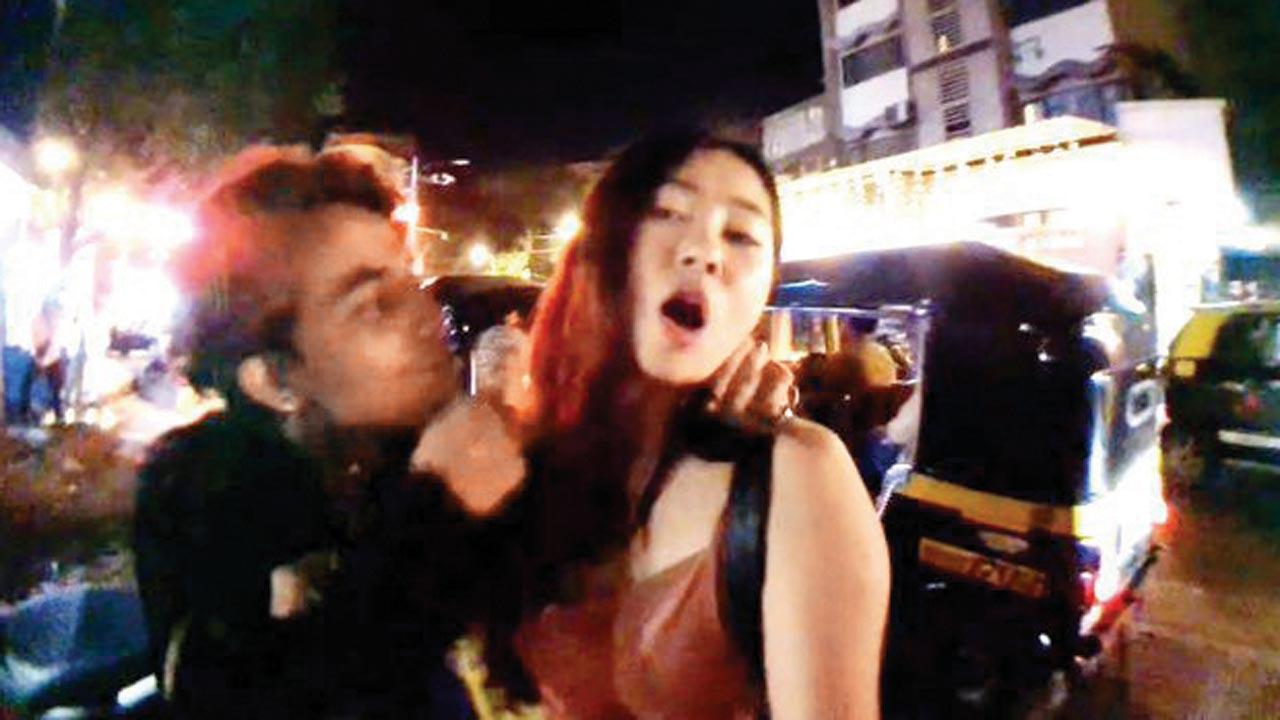 A screenshot from Hyojeong Park’s livestream on November 29 was posted on social media on November 30. The assaulters were arrested by Khar police on Thursday

It’s Park’s first trip to India, and she stopped by at Delhi and Varanasi before coming to Mumbai. She obliquely hints towards an ugly experience in Varanasi too, but does not want to talk about it. Her Mumbai moment of terror took place just five minutes away from her hotel at around 11.40 pm.

“I was making video content on the way back to my hotel,” says Park, who goes by the online name Mhyochi, “when one of the two young men standing by the roadside shouted ‘I love you’. Sometimes, people want to engage during a live stream, so I shouted ‘I love you’ back, but kept walking. He then approached me, started to put his arm around my shoulder and tried to kiss me on my face.” 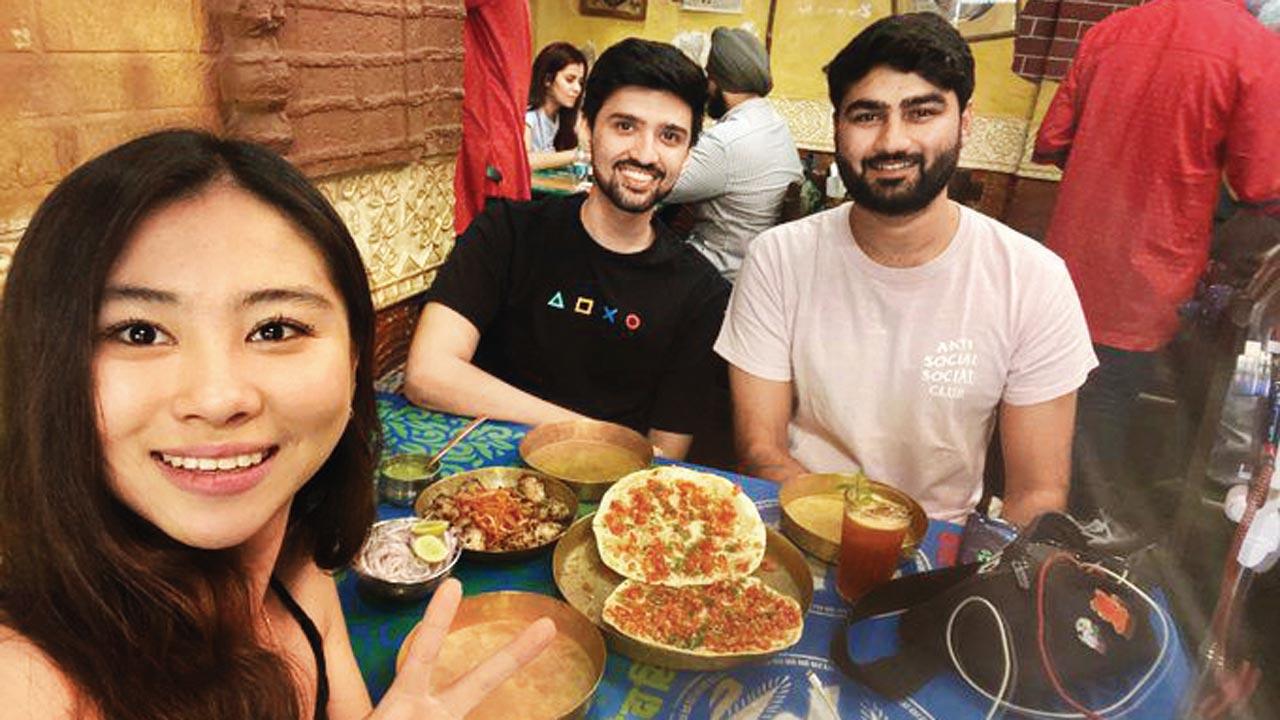 Although Park has narrated the incident repeatedly over the last few days, discomfort is palpable on her face. “I wanted to get away without triggering him or landing in a place I would regret even more,” she says, “but he grabbed my wrist and dragged me to his friend who was standing alongside his motorbike. I said, no, multiple times and in a strong voice.” The assaulter grabbed her by the shoulder and tried to kiss her again. “I panicked and wanted to reach my room as fast as possible, without escalating the matter. He began following me on the motorbike, swerved and blocked my path and told me to go on a ride with him. He asked for my phone number and I gave him a fake one.”

It’s telling that the thought on top of Park’s mind was to not escalate the matter, due to the fear of grievous physical harm. There were no police officers in sight, nor did any passer-by help. Atharva Tikkha, who was watching her live stream and happened to be nearby, intervened. “They spoke in Hindi, so I didn’t understand much,” she says “The men left, but I didn’t feel 100 per cent safe, so I just ran to my hotel.” When the clip went viral, the Internet churned with support and blame for her in equal measure. “Some said I initiated the situation by walking alone at night. Some said I shouldn’t have gone to India, worn the outfit I had on, that I was too nice and naive. They were quick to judge that something like this was bound to happen.”

The seed of self-doubt has been sown, and Park is repeatedly examining the incident from all points of view. “Did the men behave such because of how I was dressed? [Not that it matters, seeing how schoolgirls in uniforms and women in saris are repeatedly assaulted, but Park was wearing a spaghetti strapped dress]. I feel like I did something wrong, but I know I didn’t. I wouldn’t wear a bikini on the street. [While live-streaming] There is an OOTD [outfit of the day] that you have to think of. Besides, one is free to wear anything they want, anywhere. I am aware some areas are more dangerous than others, but that’s not specific to India. Even in South Korea, certain areas are unsafe for men and women.”

Park has not yet informed her family back home, but the South Korean media has picked up the story. And they are blaming her too. “I am receiving more love and support from India,” says the former engineering student. “People in my country are placing all the blame on me. They say that I should have seen it coming and that this was bound to happen in India. I want to tell my fellow Koreans that blaming the victim from behind anonymous social media accounts is just as bad as what those guys did.” The content creator has travelled through 26 countries and been cat-called in Europe. “When you put yourself in the world outside, you can get robbed, harassed… anything can happen. But you can’t stop travelling, exploring, learning about new cultures and meeting amazing people.”

Why we victim blame

Theorising that somehow, the woman may have called the sexual assault upon herself helps us maintain a positive view of society and reinforce the belief that bad things usually happen to bad people. Victim blame is part of rape myth acceptance and women who challenge traditional gender roles (stay out late, chat up with strangers, drink alcohol) are attributed higher levels of blame.

‘Victim blaming is always easier than focusing on the crime’ 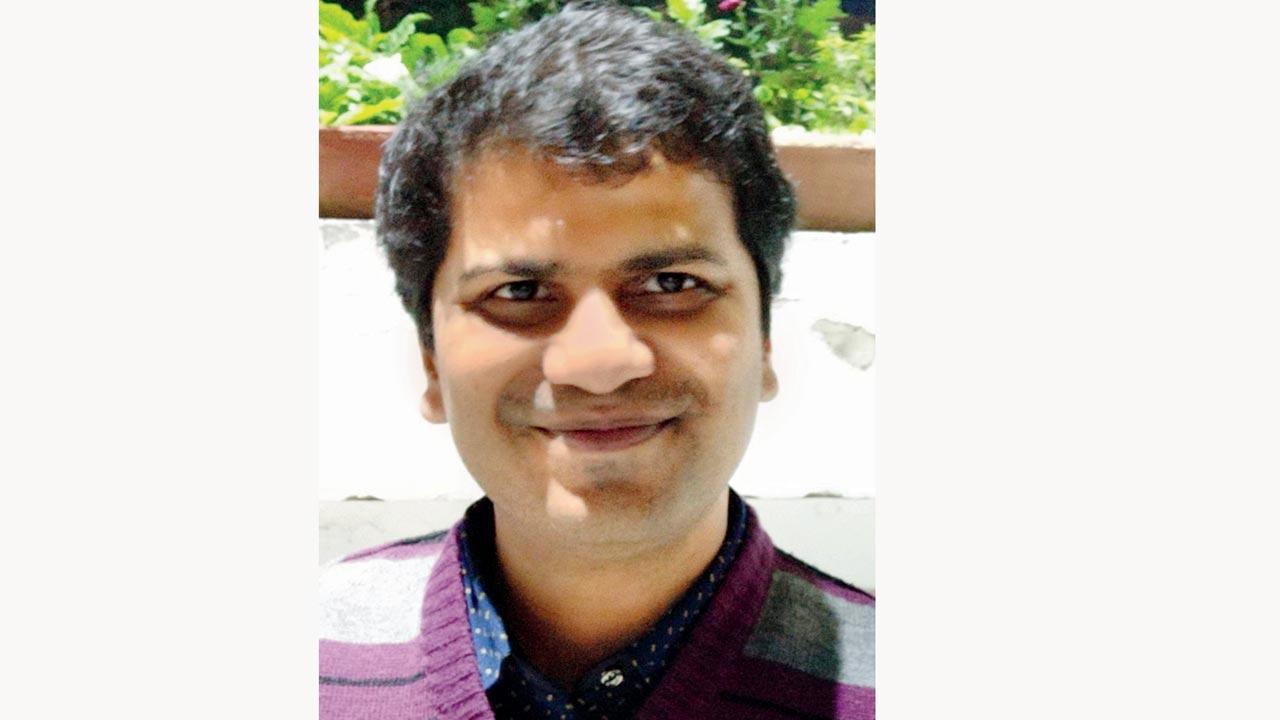 We saw Shraddha Walkar, who was brutally murdered and chopped into pieces, by her live-in partner Aftab Poonawala, victim shamed earlier this month. And now, we are seeing it happen again to South Korean live-streamer Hyojeong Park.

“Victim blaming generally stems from a tunnel vision where people do not think of the alternative possibilities to a situation, but are quick to form an early judgement about a case, mostly observed in sexual assault and rape cases,” says additional professor of psychiatry at Lucknow’s King George’s Medical University, Dr Sujit Kumar Kar.

This phenomenon in psychology is termed as fundamental attribution error where people over-emphasise on the personality or behaviour of a person (mostly the victim in such cases), rather than focusing on environmental and social situations and forces influencing the event. “Whenever a crime takes place, there are two perspectives at play and both are starkly different from one another. One is that of the criminal and the other is the public or individual opinion.  The latter is focussed on the victim and while doing so, people get a sense of feeling safe themselves. They blame it on external factors of the victim, in a justification that if they do everything ‘right’ the incident will not happen to them,” adds Dr Kar.

The psychiatrist also blames patriarchy and male dominance. He says, “In some cases, primitive attitude of men and their gender bias towards women play a part in this  They want to show their dominance.”

While social media, Dr Kar says, has made authorities more responsible, the urge to react to events, by any and everyone, is its flip side. “Victim blaming becomes an escape rather than seeing the whole perspective of a crime. Blaming someone is always easier,” he says.

Next Story : A Mumbai exhibition celebrates life of Astad Deboo