Four nets and one stellar idea

Self-taught artist and Versova fisherman Vishnu Hegde and the architect duo behind an ingenious fishing net contraption that is trapping plastic waste in a Versova creek, let mid-day in on the evolution of a project that’s quirky for its jugaad and promising for its potential 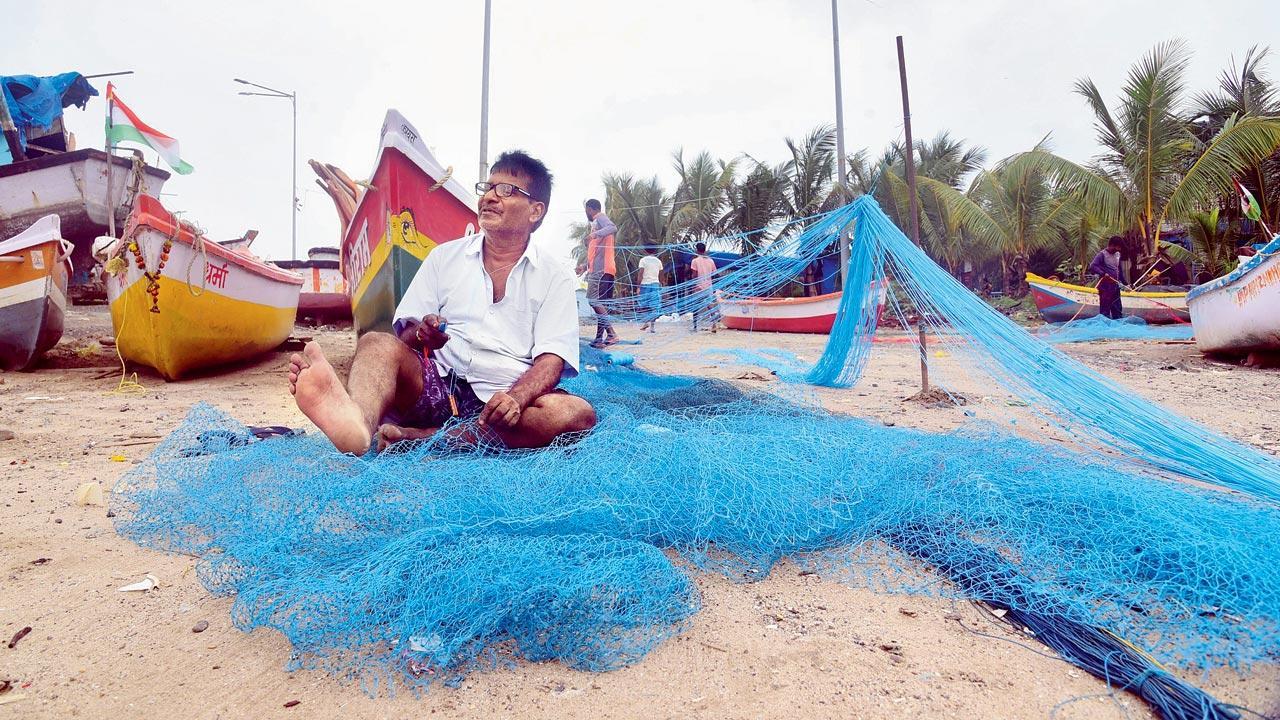 The nets for the installation made by a team of five Kolis were of thicker material and finer weave. Pics/Shadab Khan


Vishnu Hegde’s wisdom of the seas precedes both, his 62-year-long life journey and the hair on his head that is dyed jet-black. A member of Mumbai’s indigenous fishing community, the Kolis, he lives in Patil Gully, a few metres away from the Versova Jetty. Hegde is nothing short of the fabled Sinbad the Sailor, who knew the course of the ocean like the back of his hand.

As a child, he plunged into the sea with a fishing net to catch a lobster or two. Experience from then taught him about the formation of rocks, where to find the most diverse marine species, what the tidal waves say about the weather, and everything in between that modern-day GPS fails to catch. 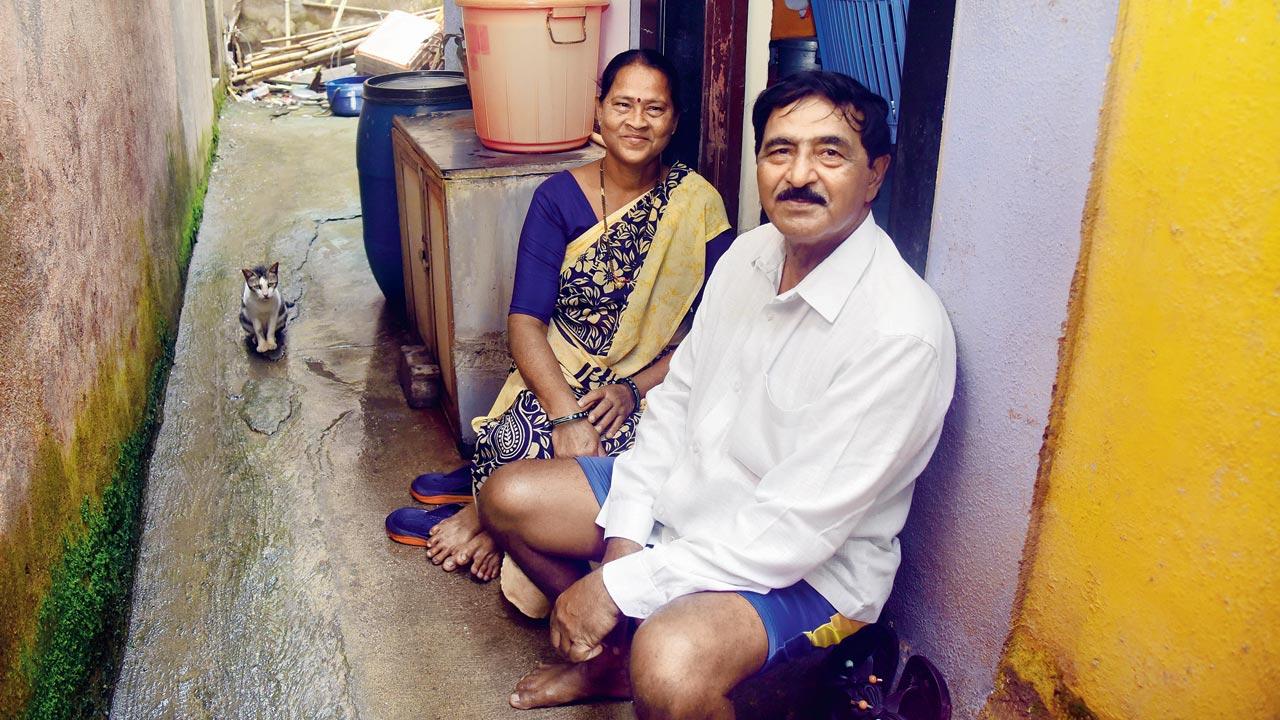 Fisherman Vishnu Hegde, 62, with wife Vanita at his Patil Gully home. Struggling with financial losses due to dwindling fresh catch and ocean pollution, Hegde says he tapped into traditional wisdom of a net installation to trap plastic waste

Unlike Sinbad, who encountered monsters in the magical realm of night time stories, Hegde and his ilk who inhabit the shoreline of Mumbai, have had only monstrous heaps of trash to wrestle. Sometimes, there is no fish to catch in the sea. He says, once, a scooter rode the waves towards the shore. Another time, a mattress and couch were vomited by the ocean. 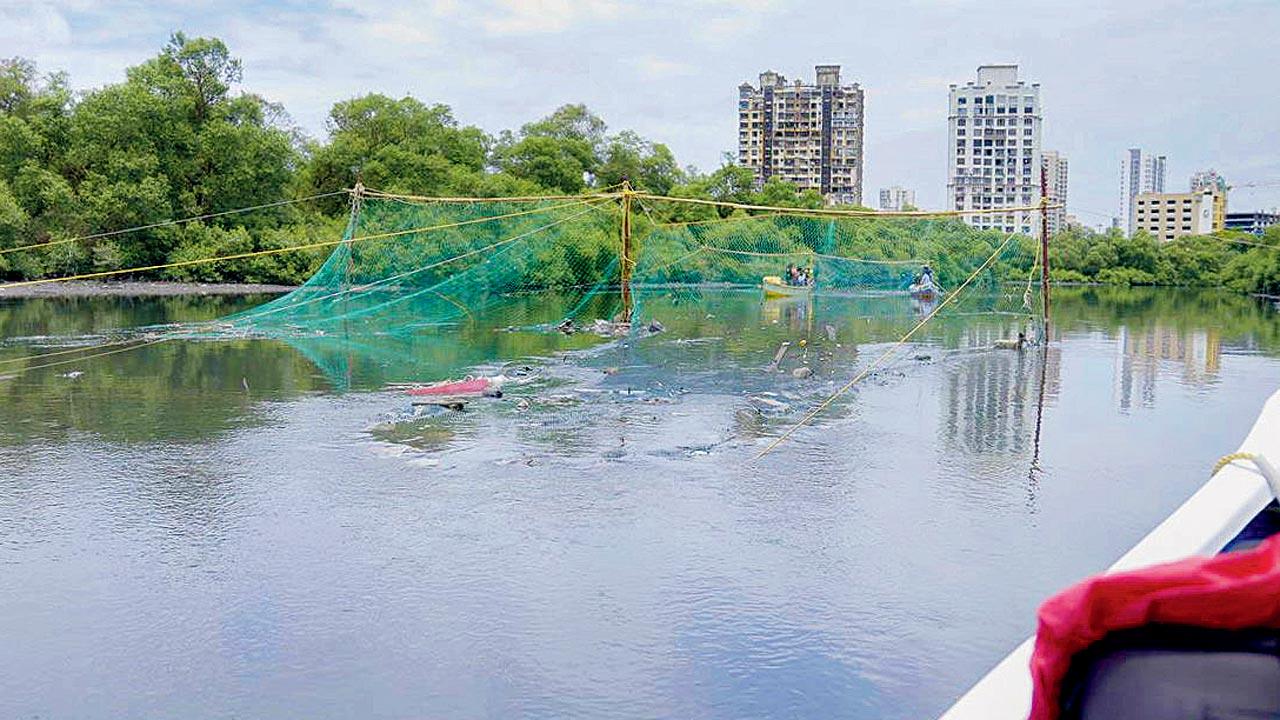 The installation at Kavtya Khadi which managed to trap 500 kg of waste in three days. Pics courtesy/Ministry of Mumbai’s Magic

This writer and mid-day photojournalist Shadab Khan meet him on a breezy Thursday morning when the sun and rain are playing hide and seek. As he walks us along the shoreline, he searches for tracts of sand not interlaced with solid waste.

This stretch is one of several in the city where creeks are spilling over with industrial waste, oil and refill, and domestic trash. It is not just marine life that is dying. 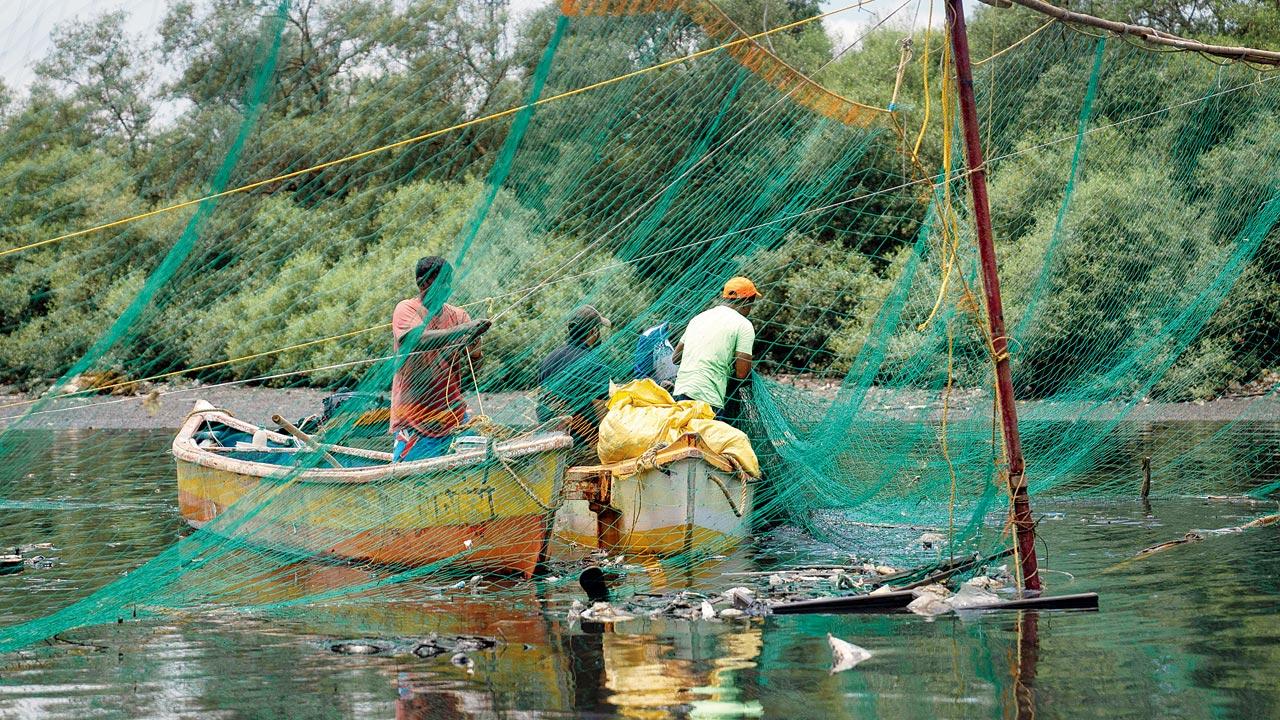 With it, the fishing community is also struggling to survive and hold on to its traditional means of livelihood. 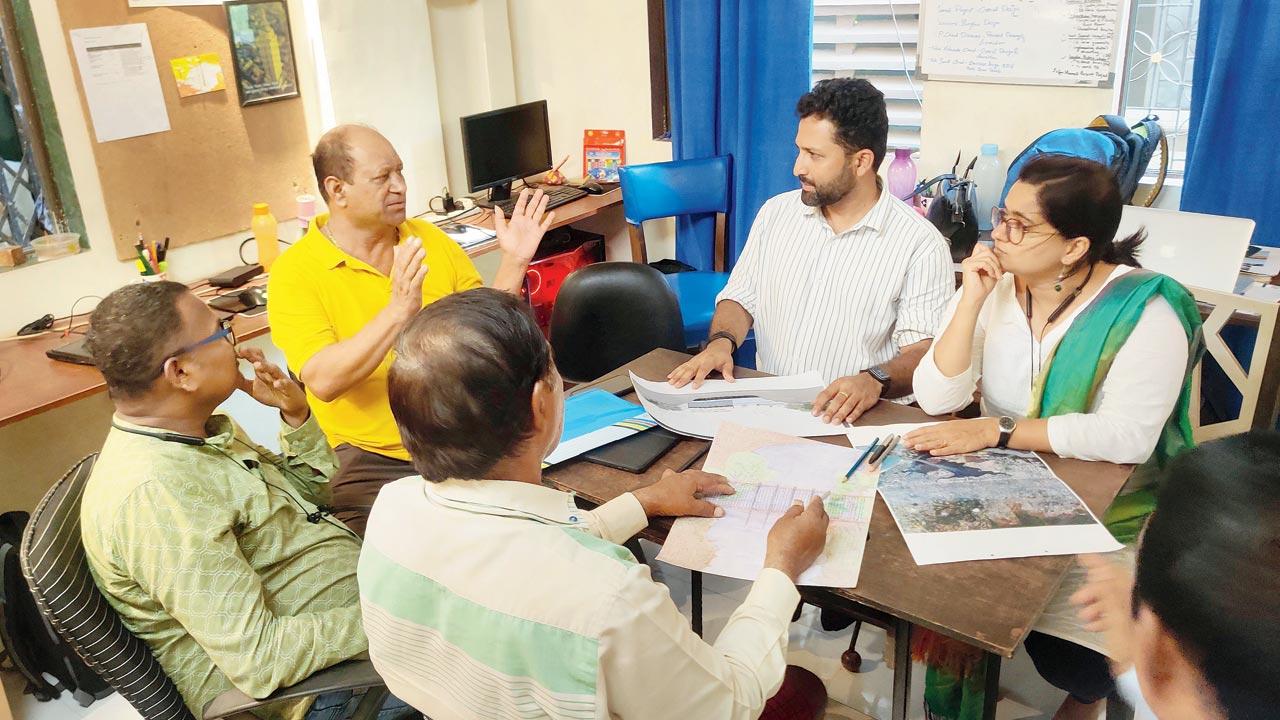 It’s this simple idea of “netting plastic” that was the genesis of New Catch in Town, a pilot project fronted by urban solutions think tank Bombay 61 Studio, the youth-led collective Ministry of Mumbai’s Magic (MMM), and research entity Tapestry. Together, the three outfits over barely three days in June hauled out 500 kg of trash from the Kavtya Khadi in Versova. At the core of the experiment, says Hegde, was Koli wisdom.

Kavtya Khadi sits 20 minutes away from the Versova Jetty by motor boat. Surrounded by waste-laden mangroves, it is not approachable by foot. 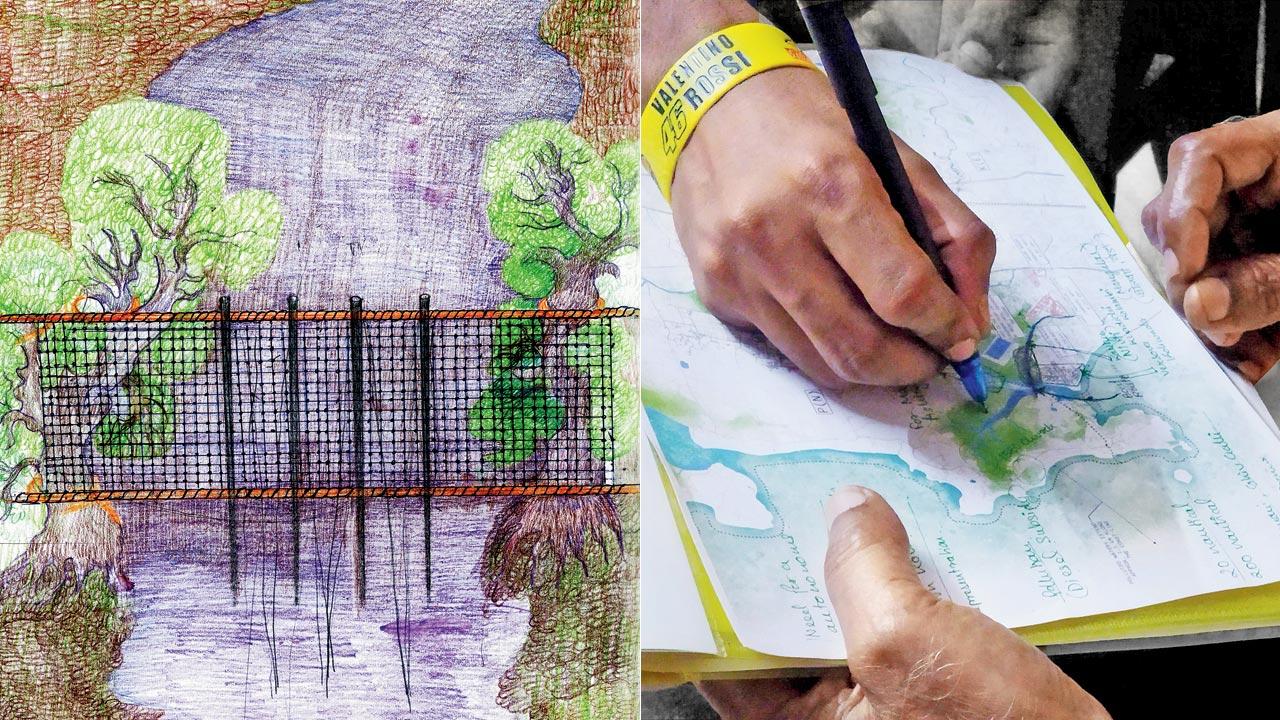 “The idea struck us in 2016 when the Versova beach cleanup was underway. With the COVID-19 pandemic, we lost a lot of time, so effectively, it took us three years to develop the idea,” says architect Ketaki Bhadgaonkar, who co-founded Bombay61 Studio with husband Jai in 2013. Long interested in the fishing community and its wrestle with urbanisation, the Bhadgaonkars had held workshops to explore ways to help the city’s koliwadas or shoreline tenements survive. In 2020, they in collaboration with MMM and hosted by the Heritage Lab, held a photo exhibition. Titled, Through the Eyes of the Kolis: A reflection on Mumbai’s past, present and future, the exhibit presented painstakingly sourced archival photos of and from the Kolis between the 1950s and the 2000s. Post the pandemic, seven to eight hours of daily work went into surveys and research that would lead to New Catch in Town, including identifying the appropriate creek to launch this experiment.

The design was mine. After endless sleepless nights, I was able to put pen to paper  and draw the first sketch of how the fishing net could be modified to the right size and thickness,” declares Hegde, a self-taught artist.

Four nets of 20-feet each were made by a team of six fishermen under his guidance. The final design, he adds, is inspired by the dol or dhola funnel-shaped nets. Dol netting refers to the popular passive technique of fishing, practiced extensively in North West India, especially Gujarat. Made of thicker material with a weave finer than the regular one, these nets took five days to modify.

Two nets were placed on the left side of the marsh in Kavtya Khadi, and another two diagonally on the right side, leaving space for boats to manoeuvre between. The mouth of the nets were wider than usual. Bamboo, steel pipes and a conical shaped metal fixture that went eight feet inside the rock bed, held the installation in place against strong winds, the tidal force and the weight of the that would swing into it.

New Catch in Town’s uniqueness lies in its adaptability. Since this is rooted in traditional knowledge and uses local resources, it can be replicated anywhere, thinks Harpreet Bhullar from MMM. “Plus, it is cost-effective. Imagine [the results] if we scale up the project, with the collaboration of various other stakeholders including government agencies. We could catch around 5,000 kg of waste in just a month from one creek.”

In 1668, the East India Company had come into possession of seven islands—Bombay, Mazagaon, Parel, Mahim, Worli, Little Colaba/Old Woman’s Island, and Colaba. There were three massive breaches or inlet between these through which the sea gushed through during high tide. The area also had four major rivers—Dahisar, Poisar, Oshiwara and Mithi—flowing through its numerous creeks.

An application by Mumbai-based environment group Vanashakti to the National Green Tribunal (NGT) earlier in December 2018, had said that around 80,000 to 1,10,000 kg of plastic waste is dumped into Mumbai’s drains and water channels every day. This increased fish mortality in areas that were once rich sites for breeding.

Hedge backs this claim. Until a few years ago, he’d set out to sea at 3 am in his trawler. Once there, he would stand at the edge of the vessel and pray to the folk deity Vetal Dev for a good day at work. Back at his Patil Gully home, Hedge shows us the scene depicted on paper using fine-tip colour pens.

He speaks of how the waters then would gift him abundant pomfret, surmai, paala, lembur, lobster, boi, kekda or crab, rawas, kolambi or prawn and nevta. Now, he manages to land only boi, prawn and crab in the creeks. “We would earn Rs 20,000 to Rs 25,000 a month from the fish he caught, and I sold in the market,” says Hedge’s wife Vanita.

Dressed in an ornate blue and gold saree in the run up to the Krishna Janmashtami celebrations in the Koliwada, she shows us the box and basket she uses to hawk fish. “We now manage Rs 3,000 to Rs 4,000 on a good day. Some days, we get nothing. For the last 15 days, we sat at home waiting for a miracle. He has been going to the sea, but the heavy wind and the plastic hazard has not helped,” she says.

Their neighbour Bhaichandra Paosul says the trick is to visit the creeks during high tide. “This is when clean seawater flows in, bringing fish with it. During low tide, the creek is flooded with sewage and industrial waste from areas around. There is not even enough water for us to take out our boats at that time.”

Hegde and his neighbours jumping in to find a solution, say experts, will go a long way in making sustainable solutions to beat the ill effects of urbanisation. IIT Bombay engineer Himanshu Thakkar is coordinator for South Asia Network on Dams, Rivers and People (SANDRP). He explains that when a section of society picks up an activity, like cleaning of water bodies, they develop a stake in preventing destructive activities. “Such initiatives are imperative. The more locals get involved, the greater the chances of saving our water bodies,” he says. The next step should be for such initiatives to receive recognition and support from the government, with the administration involving local stakeholders and citizens during the framing and execution of policies.

Versova Koliwada is a thriving village with 80,000 residents, located along the Malad creek. It is one of the largest indigenous community settlements along this creek, directly dependent on it. But since marine supplies have diminished, they are opting for deep sea fishing, which makes this employment option financially unviable.
In 2009, Hegde bought four trawlers, investing close to Rs 12 lakh. The biggest was 60 feet high while the medium-sized measured 32 feet. Five years ago, he sold these for R3 lakh after having borne a heavy loss that he estimates at around R80 lakh. He also parted with three of the kholis (rooms) he owned and settled for a smaller one where he and Vanita could live now that their daughter Shrishti is married a few houses away.

Hegde now fishes in a medium-sized engine boat that is 22 feet large. While he would bag a catch worth an annual sum of Rs 1.5-R2s  lakh, now it’s down to Rs 80,000. Only about 30 per cent of the original fish supply is now in the water.”

Gopal Jhaveri is an environment activist and member of the Aam Aadmi Party in Mumbai. Famous for his initiative, River March, he has managed to front the collection of 80,000 kg of plastic from Sanjay Gandhi National Park in 2011. Jhaveri lauds the efforts of the Koli community, but adds that such projects need to extend beyond the realm of a non-profit, and require strong government involvement. “It is the duty of the government to not let plastic waste enter the drains, rivers and water bodies of Mumbai. There are 600 km of nullahs that open up into the sea in Mumbai. During low tide, the water in these brings with it plastic to the shore. The microplastics get into the fish, and then back to citizens via food, causing serious health hazards. This dumping of plastic waste by all of us on the roads, in the forest, in the sea, should stop and it is the government’s job to ensure it.”

B61, Tapestry and MMM plan to engage government agencies here on. “We will be approaching the BMC to discuss the installing of these nets on a larger scale,” says Bhadgaonkar, hopeful that this could generate employment opportunities for the Kolis, who can be actively involved in the making, installing and removal of the nets.
In the meanwhile, residents of koliwadas in Dharavi and Mahul have approached Bombay61 Studio to discuss how they can be part of Next Catch in Town.

4
Number of modified nets used in the installation