Deep discounts are leaving deep holes in the pockets of restaurant owners. With offers such as Zomato's Gold membership no longer viable, establishments across the city are logging out of food aggregator and discovery apps 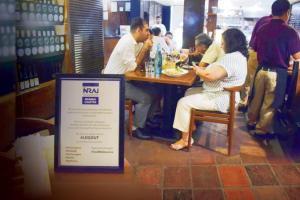 Restaurants such as Social, Slink & Bardot and Indigo Delicatessen, Colaba, have joined the movement against food aggregators. Pic/Ashish Raje


Tired of being arm-twisted by food aggregators into offering loss-making discounts to customers, over 1,350 restaurants in the country—all under the umbrella of the National Restaurant Association of India (NRAI) which has 5,00,000 restaurants across India as members—have logged out of the apps. If you are a customer of Zomato, EasyDiner, DineOut, Gourmet Passport, MagicPin and NearBuy, you will no longer be able to avail offers such as Zomato Gold's two-on-two drinks or a 50 per cent discount by DineOut for its ongoing festival.

The move, restaurateurs say, has been growing from small murmurs of angst, culminating into a final protest that was announced a day ahead of Independence Day. Rahul Singh, owner of The Beer Café, which has 40 outlets across India and NRAI's president, saying it's almost like a mass bunk at a college. "We took a unanimous decision to protest the arm-twisting methods followed by all aggregators. The fear of missing out [FOMO] became an epidemic as the aggregators propelled it. But, FOMO is reversible as we have witnessed in the #logout movement. It's time to ditch FOMO and switch to embracing JOMO, or the joy of missing out," he quips. While the cries of protest started at the Gurugram chapter of NRAI (which has 300-odd members) which opened only last week, within 24 hours, restaurateurs across cities including Kolkata, Bengaluru, Delhi and Mumbai joined the cause. "This was a bubble waiting to burst," says Singh. Around 600 restaurants in Mumbai region (including Navi Mumbai and Mira-Bhayander) have joined the #Logout campaign. 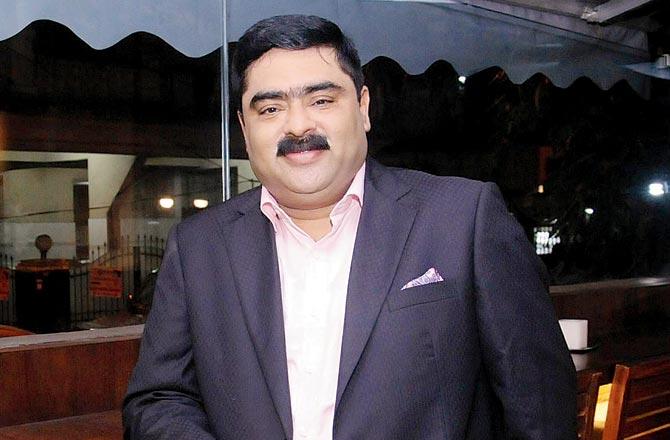 When Gold lost its shine

Zomato Gold is a paid subscription model in which users of the food aggregator app can avail of discounts such as two drinks on two free at partner restaurants. Launched in November 2017, the app by September 2018 limited the number of people who could use the membership on the same restaurant table. Yet, even this model is not viable for restaurants financially. Riyaaz Amlani, CEO of Impresario Group, which runs outlets such as Social, Slink and Bardot, Smokehouse Delhi, Salt Water Cafe, says, "They [Zomato] force restaurants to offer unsustainable discounts to drive traffic [to their app] and charges both the customer and the restaurant for the 'privilege'." Where an aggregator's subscription could cost the user R1,200 for 12 months, the partner restaurant ends up bearing a 50% discount of as much as 50% of its sales. Amlani says, "They prey on the fear of restaurateur, making us believe that our product would not move if we don't get on to their platform. They have a billion-dollar evaluation and are able to fund their burn for years, but the restaurants live month-to-month and can't sustain losses. It is sawing the branch they are sitting on and they refuse to acknowledge this. We have, on many accounts, tried to voice our opinion, but in vain. There are unfair issues with other aggregators too, like data masking, forced bundling of services, creating their own brands and diverting enquiries and escalating commissions every few months."

Anurag Katriar, NRAI, Mumbai Chapter head and head of deGustibus Hospitality, that has outlets such as D'OH and Indigo Deli, explains how Gold's one-on-one offer is not viable. "If a customer orders a dish worth R500, the second dish—say for R400—becomes free. On a single dish, my earning margin is 70 per cent which comes to R350. Now, I look at the earnings after serving two dishes, which comes down to R230. So, we serve two dishes and make less profit. With Infinity Dining it's even worse. Zomato will buy some coupons in advance at a discount of around 30 per cent, add a mark up and sell it to its customers as an unlimited food for one and a half hours, which I have to honour largely on weekends. It will not only deplete the margins to virtually nothing, but also lead to humongous wastage of food, which is criminal." Katriar argues that such offers "are turning customers into discount addicts—all this by deploying capital to build a market share and are in turn spoiling the market." "For instance, they charge an upfront membership fee for Zomato Gold, making their money upfront. The discount they sell to members is to be borne entirely by restaurants. That's unfair." 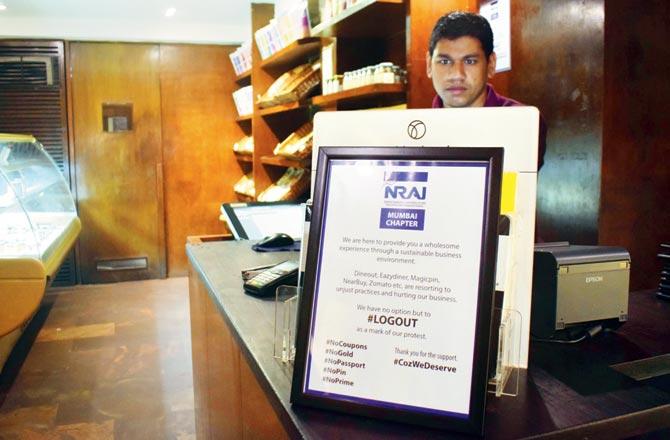 An NRAI notice informing diners that the restaurant has logged out of aggregator and discovery apps at Colaba's Indigo Deli. Pic/Ashish Raje

He adds that Zomato is also planning a new policy on delivery—not yet implemented—in which the restaurant pays a fine for delayed acceptance of order or delayed delivery to Zomato. "While we are all for compensating a consumer for a poor experience, how does it help if the compensation is going to Zomato?" Inderjeet Bagga, owner of Prankster and Pra Pra Prank in Gurugram and Delhi, agrees with Katriar on change in customer behaviour. "With deep discount platforms, we have been pulled into a numbers game. We have ended up in a mass discount-driven market place where the quality of a restaurant takes a hit and the customer has to settle for a less-than-gourmet experience. Today, customers walk in and out within seconds if they don't get the discount they want. There is a disintegration of guest experience, and restaurants, instead of focusing on quality, manpower, sourcing good ingredients are forced into value proposition."

Who's on the table

Discussions are still on. About 50 restaurateurs representing approximately 250 restaurants met in Mumbai on Saturday to discuss the next steps and unanimously decided to continue with the campaign which is getting wide traction. Four aggregators—Easy Diner, Dineout, Nearbuy and Magic Pin—have written to NRAI to tackle the issue and a meeting will be held on Monday. On Saturday, after several days of silence Zomato's Founder & CEO, Deepinder Goyal sent a mail to the restaurant partners saying: "It pains us to see that we failed to create a sustainable Gold program which works as well for restaurants as it does for consumers. We want to hear your concerns and pain points as a restaurant owner. Specifically, when it comes to Zomato Gold, what is the top pain point for you? And how do you think we can help solve it?" 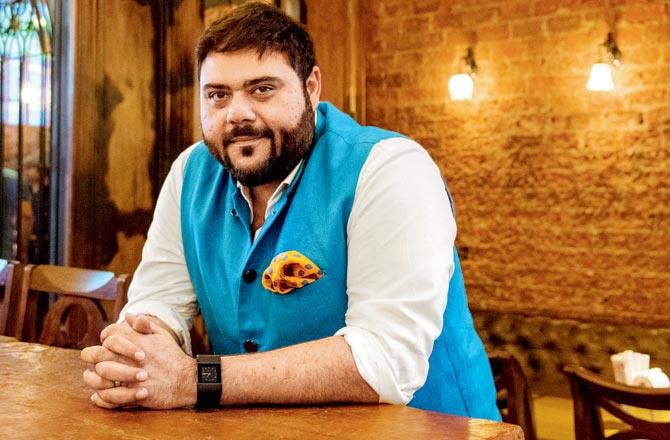 For an industry that has had to battle high rental costs, no Input tax credit (ITC) on GST, deep discounting has just "further spoilt the mood" says Sagar Daryani, founder of WOW Momos, head of the one-month-old Kolkata NRAI chapter, with 150+ members. "We are putting up posters, training managers to enlighten customers and have, so far, received support," says Daryani, who has pulled out of Zomato Gold on Dine-in & GIRF by Dineout which offers 50 per cent off on dining for the current month. While they continue to use Zomato services for delivery, they have logged out of all discount apps. Olive Group owner AD Singh, whose restaurants did a #Logout in Gurugram and Bengaluru, says, "Restaurants cannot run businesses where the focus is shifting to who is offering 50 per cent discount. In delivery most of us have happily partnered with some aggregators, looking at it as a win-win for both. Now we are discussing the next steps. There's a lot of value to be created for aggregators and ancillary industries around ours but we need to work together and protect each other's interests," he adds. 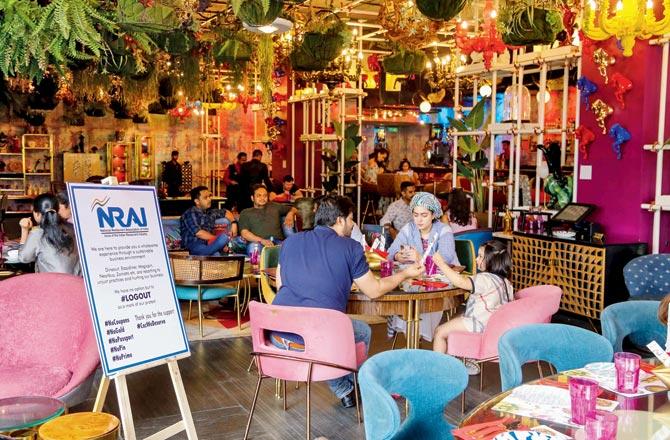 600
No. of Mumbai restaurants that have joined the #logout campaign 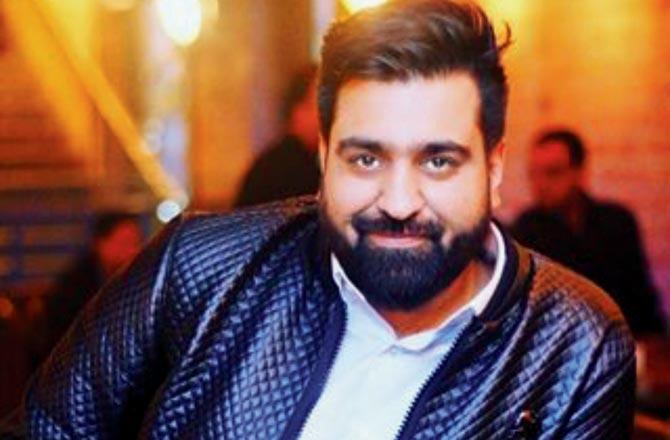 'We do not see any impact on our Gold subscribers due to the #Logout campaign. Most restaurants owners in these cities are in touch with us and are not planning to join this campaign. We are told that #Logout is being instigated by a few restaurant owners and is not the voice of the industry at large. For the industry, Zomato Gold has been a key business driver for the last 18 months and they don't want to be driven by interests of a few restaurant owners'
Company spokesperson, Zomato

'DineOut is closely working with all its restaurant partners and NRAI to build a more viable consumer
facing platform'
Vivek Kapoor, DineOut

'We understand & support NRAI... We believe that there is a certain value that we bring to the table and also have an obligation on our end to ensure that our partners stand to gain. We will engage with NRAI & our restaurant partners to arrive at a win-win solution'
Ravi Shankar, co-founder NearBuy