Or perhaps he does not believe in a dress code? Devgn is shooting for Abhishek Dudhaiya's war drama, Bhuj: The Pride of India, in Kathda village of Mandvi 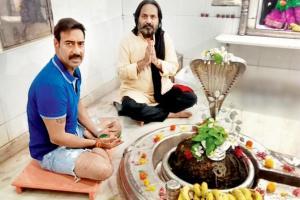 Ajay Devgn at the Shiv Temple in Gujarat


Ajay Devgn visited the Shiv temple in Mandvi in the Kutch district of Gujarat in shorts. Devotees were not exactly pleased with his attire. They felt he should have shown some respect and dressed appropriately, especially since he calls himself a Shiva devotee. Did Devgn decide to make an impromptu visit and not have time to change? Or perhaps he does not believe in a dress code? Devgn is shooting for Abhishek Dudhaiya's war drama, Bhuj: The Pride of India, in Kathda village of Mandvi.

Talking about Bhuj: The Pride Of India, the team after wrapping up the first schedule in Hyderabad, headed to Gujarat. mid-day has learnt that over the past few days, Devgn and co-star Sonakshi Sinha shot for a song in Kutch, complete with a majestic set and over 300 background dancers.

Disclosing some insights about the song, a source informed mid-day, "The unit arrived in Mandvi last week. A huge set was erected at the venue for the song. Composed by Amar Mohile and choreographed by Ganesh Acharya, the number was shot as a maha aarti where the villagers and jawans of the Indian Air Force and Border Security Forces are praying for the success of Ajay's mission. The song opens with Ajay and Sonakshi offering their prayers to Lord Ganesha."

Confirming the news, producer of the film Bhuj: The Pride Of India said: "It's the climax song and has been choreographed in a grand manner by Ganesh Acharya. He brought 300-odd dancers that made the song majestic and visually beautiful."

Bhuj: The Pride of India is a war drama of Indo-Pak war, and the makers are all buckled up to recreate the entire scenario. Undergoing the direction of Abhishek Dudhaiya, the forthcoming movie is being shot at Ramoji Film City, Hyderabad.

As Ajay Devgn in the lead, the Singham actor will be seen essaying the role Squadron Leader Vijay Karnik who was in-charge of Bhuj airbase during the 1971 war. Accompanied by 50 air force and 60 defence security personnel, the makers have reconstructed the IAF airstrip at Bhuj.

On the other hand, Sonakshi Sinha will portray the role of a social worker Sunderben Jetha Madhaparya, Sanjay Dutt will be seen as civilian Ranchordas Svabhai Ravari, Rana Daggubati playing Madras regiment lieutenant colonel and Ammy Virk as a fighter pilot. The film will hit the theatres next year on August 14.