The thirty one year-old Berklee College of Music, Boston graduate is one of the few young, successful Indians composing in Los Angeles 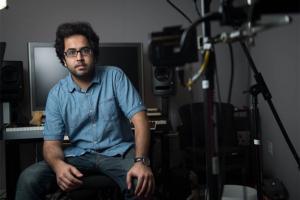 
Los Angeles, CA, USA – Indian composer-producer Salil Bhayani, who bagged the Best Score Award at the Dreamachine International Film Festival in Hollywood, believes that music is the voice of the Universe.

The thirty one year-old Berklee College of Music, Boston graduate is one of the few young, successful Indians composing in Los Angeles. For Bhayani, however, who scored music for films acquired by PBS, Netflix, as well as Amazon Prime, Hollywood is a mirage, and the composer's life mission is to find substance and give profound meaning to all of his projects.

Bhayani, who was only 23 at the time, was one of the prime music producers for the 2012 autobiographical audio book on Dalai Lama, released by the largest audio book publisher in India, Karadi Tales, and entitled A Sacred Life. Bhayani's music in this story can be described in one word alone: peaceful. The meditative drones, strings, and the south Indian instrument Veena render the music deeply meditative and immersive in the overall journey of Dalai Lama.

"Working on a project about Dalai Lama was a transformative experience," says Bhayani. "It made me a lot more grateful for all I had, and the possibilities that lay in front of me, even if I may not always see them."

The thematic undertone of spirituality indeed attracts the composer time and time again. Six years after A Sacred Life, Bhayani encountered an Indian-American filmmaker Varun Chounal who beautifully documented the tradition of Sufi music and dance in his short 2018 documentary A Tune of Devotion. He skilfully scored Chounal's powerful narrative that speaks about the spiritual energy of Sufi musical tradition and the message of universal love and kinship in Sufism. Bhayani artfully blended a delicate fusion of tabla, bansuri, sarod, sarangi, and a string section with the raga based melodies.

"Working on diverse projects from around the world has made me realize how we as humans are so united in the emotions we feel at our core", reflects Bhayani. "It has given me that much more courage to experiment with world instruments. Sure enough, the music sounds that much richer."

In Boston, Bhayani collaborated with renowned Chinese musician Yazhi Guo. Working with this award-winning performer, considered the best suona player in Asia, opened for Bhayani up a great channel of knowledge about the authentic Chinese music. While there are great differences in the approach between Indian classical and folk music traditions and Chinese musical styles, Bhayani was able to quickly map the parallels: the prominence of pentatonic scales, the free improvisatory nature within a given set of rules, and the spiritual nature of music from both the subcontinents was something the adept Indian composer picked up on and internalized in his compositions.

His music received critical acclaim and brought more international commissions: in 2021, Bhayani is set to arrange and orchestrate an entire score of traditional Chinese music for a new docu-series, "Chinese Artists in America," by an award-winning young Chinese female screenwriter and director Yilin Zheng.

"It is more crucial now than ever to be a strong voice of diversity and inclusion, and I seek to work with storytellers who are telling important stories; stories that we do not hear very often but need to hear so that we are that much more united, empathetic, and compassionate," stresses Bhayani.

It is only fitting that Bhayani recently received a nomination for Top Indie Film Awards, an innovative festival celebrating artists whose works exude "originality, passion, or vision."

The outstanding Indian composer in the meantime, is already impossible to catch: he is globe-trotting musically working on the Songs for Peace for a renowned Japanese trombonist and arranger Yoshie Nakayama, and on a set of Italian crossover songs for an acclaimed Russian-American singer and voice pedagogue Elena Zoubareva. May the beautiful music garland follow him wherever he goes and may the peaceful grace of his music give us meaning and depth.

Next Story : Rima Jain and Ranbir Kapoor ring in their special day together