'Zareen Khan and Anshuman Jha's chemistry will entertain the audience' 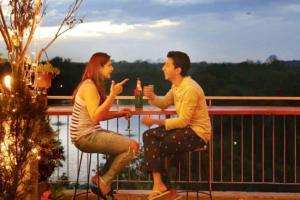 
The upcoming film, Hum Bhi Akele, Tum Bhi Akele, revolves around two homosexual characters. The Zareen Khan and Anshuman Jha-starrer feature a lesbian woman and a gay man leading the narrative. The film's screenplay was among the top 10 at the Singapore Film Market. Oscar-winning No Man's Land (2001) producer Marc Baschet hailed it "as the most unique love story ever."

The film has been directed by Harish Vyas, who earlier helmed Angrezi Mein Kehte Hain (2018), which starred Pankaj Tripathi and Sanjay Mishra. Says Vyas, "I made a documentary on homosexuals a decade ago. I found this lightness in their life, which was missing in films about them. I was keen to add elements of this lightness and fun, just like I had tackled love in old age in Angrezi Mein Kehte Hain." About the actors, he says, "Anshuman has a sensitivity, which I always wanted his character to have. Zareen impressed us with her audition. Their chemistry and pairing will entertain the audience."

The unit recently wrapped up a shoot schedule in New Delhi. The next stint of shooting will be in Dharamshala and Mumbai. Adds Jha, "As a straight heterosexual man, after essaying this character I got a chance to understand the struggles of the LGBT community. I was told that I was taking a risk at this point in my career. But it's a challenge I couldn't let go. Love is love, sexuality no bar. This was a golden opportunity to showcase it."

As prep, the actor attended workshops conducted by Vinod Rawat, who is Hrithik Roshan's acting coach. "It helped me get into the mind of a homosexual. I have tried to be sensitive and responsible with my character." While the director claims that he had written the part keeping Jha in mind, the film is also a slice-of-life take on the clash between the gay and lesbian communities. Jha is elated to have Khan as co-actor. "She got the pulse of the character in her audition. She was focussed through the workshops. She will surprise with her performance."

Also Read: Zareen Khan: I am open to all kinds of characters

Next Story : Sanjay Gupta: Music has a longer shelf-life than films