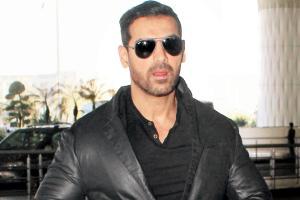 
John Abraham is ready with his next, RAW: Romeo Akbar Walter, which narrates the story of a true patriot. Written and directed by Robbie Grewal, the film originally starred Sushant Singh Rajput who had second thoughts and opted out.

John had taken to Twitter last year in June announcing that he will be doing the film. He wrote:

RAW: Romeo Akbar Walter is an espionage thriller that also stars  Mouni Roy, Jackie Shroff, Sikander Kher and Suchitra Krishnamoorthi in lead roles. The film is shot in Kashmir and is slated to hit theatres on April 12, 2019.

The makers of the film had released an official teaser of the film on Republic Day this year. Check it here:

As we celebrate our nation's 70th Republic Day, let's remember those who have lived and died to protect our freedom. Presenting the teaser of 'Romeo Akbar Walter'. #RAW based on the true story of a patriot in cinemas on April 12th. Jai Hind! #RAWTeaserhttps://t.co/PKmE11j0fy

The 1 minute 23 seconds teaser shows John Abraham in a completely different avatar. The video has sure made us curious to see what the film has in store for us. On the work front, John was last seen in the film Satyameva Jayate. His earlier film Parmanu: The Story of Pokhran did well at the box office raking in over Rs 91 crore (USD 13 million) worldwide.

Besides RAW: Romeo Akbar Walter, John Abraham also has a couple other films in the pipeline, namely Batla House and Pagalpanti.