Speaking about the honour, Karan Johar said, "I'm looking forward to celebrating Indian Independence Day in one of the world's most vibrant multicultural cities, Melbourne." 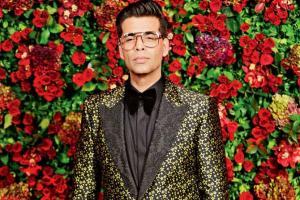 
Every year, the iconic Federation Square in Melbourne is the venue for the Indian Film Festival of Melbourne (IFFM), which is easily one of the most important events for the Indian community living in the region. An important moment during the largest film festivals in the southern hemisphere is the hoisting of the Indian flag ahead of the Independence Day celebrations.

The year, as the festival celebrates its 10th year, Karan Johar has been chosen to do the honour of hoisting the Indian flag at the event. The key highlight of the event if the flag hoisting, and Karan Johar will hoist the flag in the presence of a large audience who attend the event to witness this patriotic spectacle.

IFFM this year has courage as its central theme. The hoisting of the flag will take place in front of thousands of Indian-Australians and people from the subcontinent on August 11, 2019. Also present will the High Commissioner of India in Australia and The Mayor of Melbourne.

Speaking about the honour, Karan said, "I'm looking forward to celebrating Indian Independence Day in one of the world's most vibrant multicultural cities, Melbourne. The sense of community and unity centres around the pride of our flag and the celebration of India's independence is something I'm looking forward to. It's truly an honour for me to be the one this year to hoist our tricolour at the landmark in Melbourne."

On the work front, Karan Johar has acquired the rights of Vijay Deverakonda's Dear Comrade's Hindi remake. After watching the south film, Karan shared on social media: "Had the pleasure to be the first to see #dearcomrade ! What a powerful and intense love story !!! Top notch performances by @thedeverakonda and @rashmika_mandanna !! The film is exceptionally moving and leaves you with such an important and relevant message! Strongly directed by debut director @bharatkamma and wonderfully produced by @mythriofficial !! Exceptional music by #justinprabhakaran (sic)."

Next Story : Sonu Nigam celebrates 46th b'day, works out for the first time in life