It's a shame really that Omerta lacks depth, never giving an insight into Omar's criminal designs. 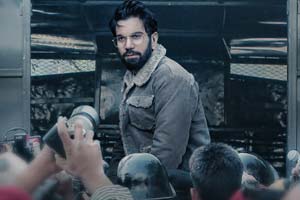 Rajkummar Rao in a still from Omerta

In a scene in the final act, Hansal Mehta laid open the pivotal reason why he attempted a movie on Ahmed Omar Saeed Sheikh. A bunch of Pakistani officers who have to arrest Omar for killing Wall Street Journal scribe Daniel Pearl, put it perfectly - You have the making of leader; you are an educated man who can command respect unlike scores of illiterate Jihadis. Which I believe would have been the trigger point for Mehta to consider making a movie on the man. Tracing the journey of this London School of Economics graduate, Mehta walks us through the incidents that could as the highlights of his eventful life - Bosnian genocide, his arrest in India after a failed attempt at kidnapping foreign tourists, his involvement in Kandahar attack, 9/11 and eventually the brutal execution of Pearl. It would have been dreadful if Mehta staged it as a cautionary tale; understandably he didn't want to glorify Omar. But it isn't the best thing that at the end of the film, you don't quite know who Omar is. A large part of the problem lies in the fact that Mehta or his writer Mukul Dev never delve into how a seemingly well-raised, educated man turned to fundamentalism. But skimming through incidents is how Mehta approaches the character. Omar's ideals are never elucidated; his involvement in 9/11 and Kandahar are conveyed in background narration, sans dialogues, and his marriage to a trophy girl from the creme de le creme of Pak circles is gratuitous. Mehta makes no effort to analyse the psyche of this dreaded criminal. In a folly, I even assumed that Omar was smitten by the rush of power when he tells his Abba (father), how much people respect him.

A fair share of work is, thus, on the shoulders of Rajkummar Rao. You buy into how earnestly committed he is to his part. Never rising above the script, but filling large loopholes of the screenplay with his nuanced act. He demands one to remain invested in the film. The turn of the character from a naive boy consumed by hatred, indoctrinated into Jihad by training to an icy, cold terrorist is reflected in Rao's demeanor. Of course, he nails it in the scene where he murders Pearl. With a cannibalistic thirst, Rao thrusts the body with a shovel, eventually beheading the scribe and holding up his cut head with a visible satisfaction, will make chills run down your spine.

It's a shame really that Omerta lacks depth, never giving an insight into Omar's criminal designs. As a thriller, it's pacy and yet, distinctly half-baked and stiff. I assure you, this movie could be about one of most dreaded men of our times but this film tells us nothing about the man that a quick google search wouldn't. As for Rao, a friend rightly puts it - He was good even in Shaadi Mein Zaroor Aana; what's special about this then?