Where is the razor? Hrithik Roshan 'almost' shaves off his beard 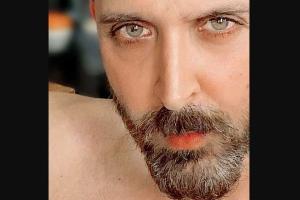 
Hrithik Roshan is keen to experiment with his look as he wants to bid adieu to his lockdown facial fuzz. Over the weekend, the actor posted a selfie, the last glimpse of sorts of his beard before shaving it off. He wrote in the caption, "Before the beard goes", which sent his fans in a state of excitement.

Fans felt Hrithik Roshan looked more gorgeous with his salt-and-pepper beard. Some of them voted it as the close- up of the year. A section of the star's admirers posted crying emojis hoping he would do a rethink. One user commented, "Noooo", while another wrote, "Your selfies are no less than a photoshoot."

Some were excited to see the transformation and complimented the actor on his good looks. One user wrote: "Closeup of the year." "CONGRATS .....2nd MOST HANDSOME MAN IN THE WORLD," shared one user, while one wrote: "You're handsome both with & without a beard."

But Roshan was in no mood to relent. On Monday morning, Hrithik shared a new video, where his beard is "almost off". He wrote in the caption: "Guess a beardo never really takes it all off. [sic]" Perhaps it is also part of his prep for Krrish 4.

And it’s off .
Well almost.

We wonder, how fans are going to react to this new look of Hrithik!

Next Story : Varun shares 'main brief' by David Dhawan during Coolie No 1 shoot