Karan Johar has a fetish for designer threads, so can his tots, who turn two next month, be far behind? 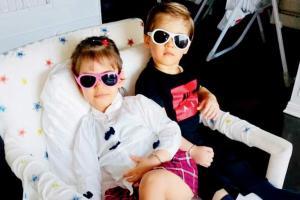 
As a guest on Neha Dhupia's podcast, Karan Johar had revealed that the ABC he teaches kids, Yash and Roohi is that A stands for Armani, B is Balenciaga and C is Christian Dior.

Earlier, KJo had posted videos on Instagram, in which he asks the munchkins, 'What designer are you wearing?' But kids will be kids; they love to mess up. Imagine them dropping milk and food on their outfits, which cost more than a small car.

On the professional front, Karam Johar is currently judging the show with BFF Malaika Arora and Bollywood actress Kiron Kher. Apart from this, the director-producer is also hosting Koffee With Karan season 6 where a lot of celebrities are seen spilling the beans!

Next Story : 'Balasaheb Thackeray's glasses were given to us to replicate'