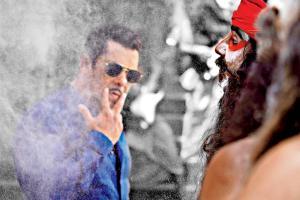 
On Thursday, Salman Khan found himself embroiled in a controversy when photographs of a Shivling covered with wooden planks during the shooting of Dabangg 3 surfaced on social media. A video of the actor shooting for the film's title track found its way to the internet before the makers could officially post anything about the 'Hud Hud Dabangg' song.

Salman Khan is shooting for Prabhudheva's directorial venture, Dabangg 3 in Maheshwar, Madhya Pradesh. On Friday, line producer Harsh Dave released a statement on Twitter. "We had constructed the perimeter for the Shivlinga and had positioned two people on the side to guard it and avoid people from walking on it. We had no intention of hurting anyone's religious sentiments. We have relocated the set (sic)."

We had constructed the perimeter for the Shivlinga and had put the two people on the side to guard it to avoid people from walking on it. We had no intention of hurting anyone's religious sentiments and we have relocated the set.
Regards,
Harsh Dave
Line Producer
Maheshwar, MP

This created a war of words between the ruling BJP and its opposition, Congress party.

On the other hand, Salman Khan announced the completion of Dabangg 3's title track, Hud Hud Dabangg. He shared a picture from the sets, which had him decked in his royal blue shirt, jeans and his trademark sunglasses hooked behind his shirt's collar.

Dabangg 3 is a prequel, which brings forth the backstory of Chulbul Pandey, who will be shown as a local goon with a heart of gold as a prolonged flashback, which will cover his metamorphosis into a Robin Hood cop.

Produced by Arbaaz Khan Productions, the film stars Salman Khan and Sonakshi Sinha in the leads.

Also Read: Dabangg 3: Rajjo is back! Sonakshi Sinha wows on day one of the shoot

Next Story : Lick the plate clean! Ranveer Singh's goofing around with Sahil Khattar