Ranbir Kapoor enjoys a meal off a banana leaf with SS Rajamouli, Nagarjuna

The trio, who were in Chennai to promote Ayan Mukherji's upcoming film 'Brahmastra', tried the delectable south Indian meal served to them on a plantain leaf in the traditional way. Ranbir, in particular, seemed to relish the food. 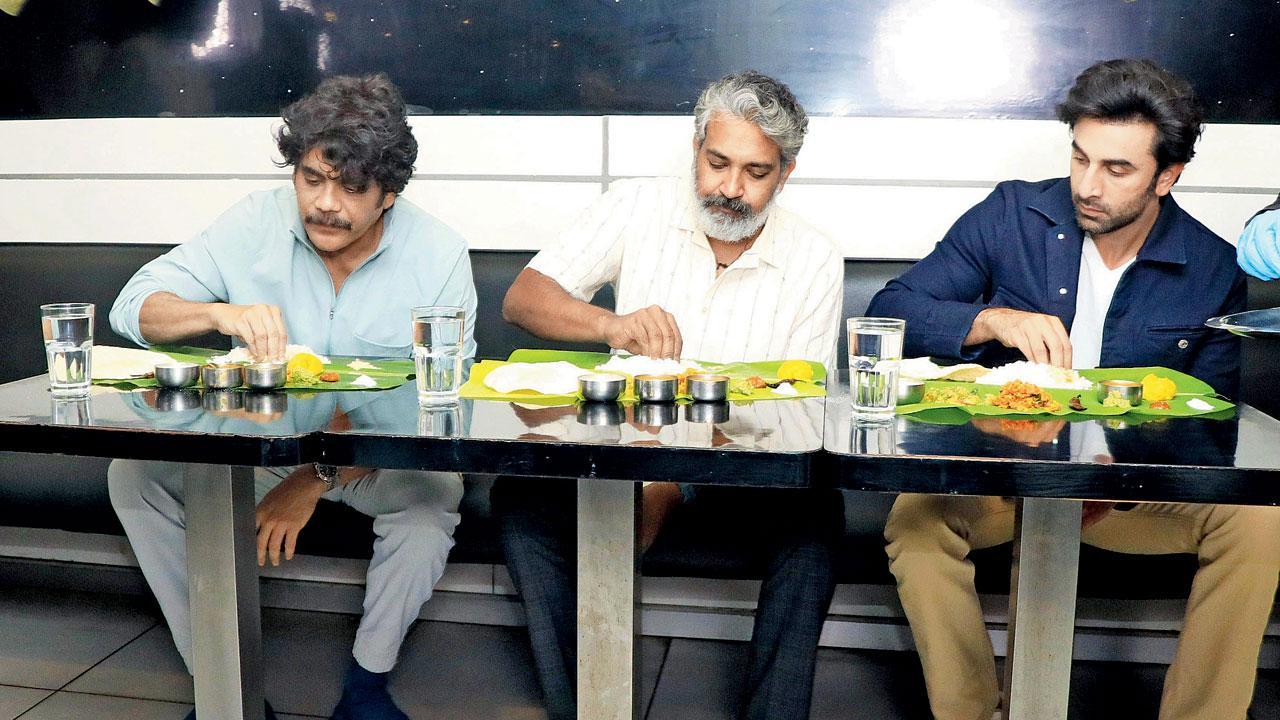 
Actor Ranbir Kapoor on Wednesday tried out a tasty south Indian meal along with ace director S.S. Rajamouli and Telugu superstar Nagarjuna. The trio, who were in Chennai to promote Ayan Mukherji's upcoming film 'Brahmastra', tried the delectable south Indian meal served to them on a plantain leaf in the traditional way. Ranbir, in particular, seemed to relish the food. Earlier, speaking at a press conference called by the 'Brahmastra' team, Ranbir said, "I am so happy to share our vision of 'Brahmastra' with you. All of you are from a state that is so rich in culture, in music and performing arts. It is my privilege to be here."

Ranbir went on: "Brahmastra started for Ayan and me in 2013. We were doing a film called 'Yeh Jawaani Hai Deewani' and during one of the schedules in Manali, he came and told me that he had this idea of two friends (this was before 'RRR') one of whom had the power of fire and the other the power of water. Of course, the film didn't turn out the way he thought at that time and it has turned out the way you guys are seeing it right now.

"I have seen this boy Ayan Mukherji from the age of 29. He has become a young man now. He has spent 10 years of his life on this film. Everyday, he has been working and dreaming this vision. Just to be a little soldier in his battle to achieve his vision has been such an honour and such a privilege for all of us involved with Brahmastra." Talking about his co-actors, Ranbir said, "I had the honour of working with legends such as Amitabh Bachchan sir and Nag(arjuna) sir in this film."

The actor went on to thank Rajamouli, who is presenting the film, saying: "Never in my wildest dreams have I thought that I would have a poster with S.S. Rajamouli's name and my face on it. That is such a big privilege. Thank you so much for this." Talking about Alia Bhatt, his wife and co-star in the film, Ranbir said she is one of the best actors he has ever worked with and he had the good fortune of finally marrying her.

"Alia is somebody whom I met on this film. Our romance started on this film's set but by the time the film got over, we are married and expecting a baby also. So, you can really understand how long this journey has been," the actor said, adding, "It is really an emotional moment for all of us."

Next Story : Mike Tyson abused me in English, but lovingly: Vijay Deverakonda