'Rocketry: The Nambi Effect' Review: Gotta be Maddy for Nambi for this!

As an actor in movies, Madhavan, uniquely positioned as a Tamilian from Jamshedpur, has had a fine bi-lingual career, notably loved among desi, female audiences as the ‘paavam’ pin-up you can introduce your parents to! 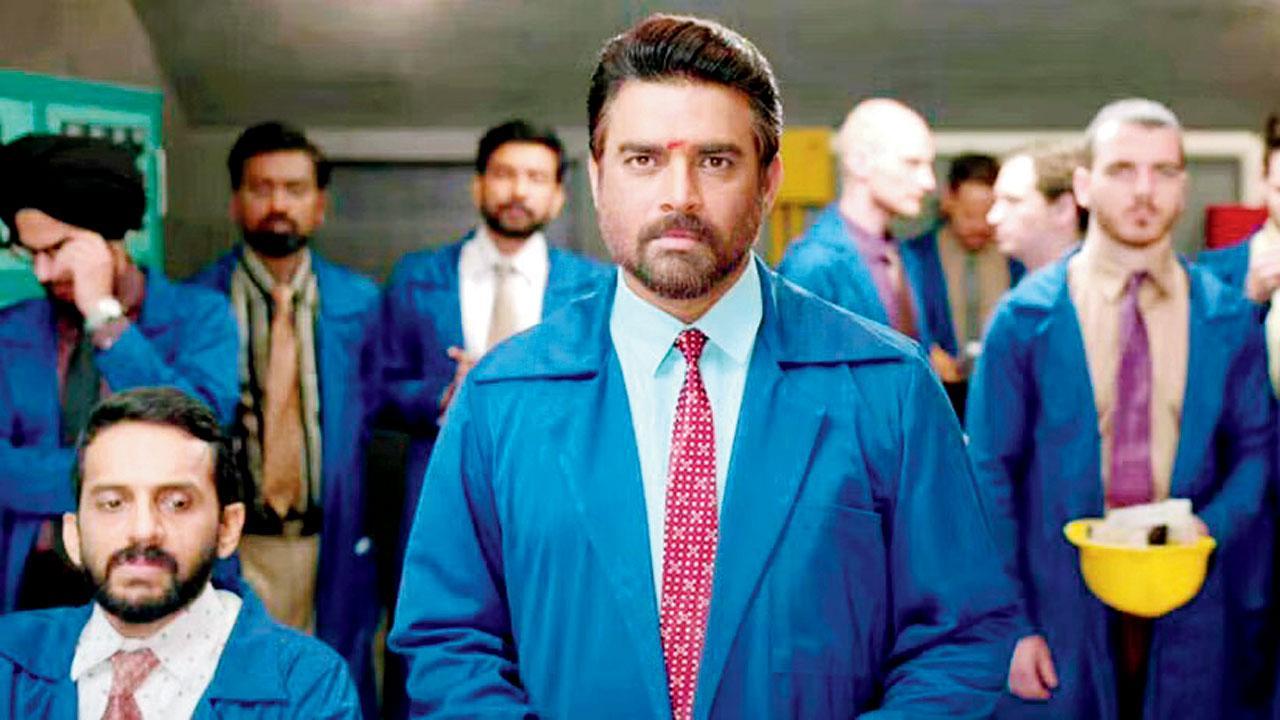 It’s impossible not to get swayed by the sheer movie-madness of R Madhavan (actor nicknamed Maddy), who’s written the story, screenplay, dialogues, besides directed, produced this film, shot with separate versions in three languages, headlined by himself on the screen as well!

As an actor in movies, Madhavan, uniquely positioned as a Tamilian from Jamshedpur, has had a fine bi-lingual career  notably loved among desi, female audiences as the ‘paavam’ pin-up you can introduce your parents to!

In the role of a state scientist here, Madhavan, 52, ages over decades, to shed himself through performance and prosthetics enough, that you’re fairly convinced, it’s not him you’re witnessing on the screen. But the real-life, aero-space engineer Nambi Narayanan himself, that the film is based on. At one point the actual person’s face merges with the actor’s, and even that doesn’t feel too odd. This is Madhavan’s finest work so far.

What could have drawn the actor-writer-producer-director (in the mould of Kamal Hassan) to go this far for a part? I guess his involvement with the person/story concerned. Which is that of a technocrat at ISRO, who was falsely framed, arrested in an espionage case, back in 1994 — accussed of passing on supposedly precious rocketry tech to Pakistan, in lieu of $9 lakh and cheap sex. What Nambi went through, being publicly derided as a traitor, is heartbreaking, of course.

Here’s the issue with getting overwhelmingly close to your subject, though — something that non-fiction writers (journalists, included) are naturally wary of. You dive too deep into their pains and concerns, life and times, there’s the fear of drowning in the quicksand of their detail. Forgetting for a moment, if the audience is as engaged with the story itself, as they are with the cause, of course. Sometimes, not just God, but also the bore is in that detail.

Rocketry: The Nambi Effect is doubtlessly an over-sincere film, in that sense. The production design and VFX passes grade, surely. It feels lambi (long), not so much for the running time as for the writing (scenes, story, structure etc), that doesn’t adequately draw out the characters (particularly the leading man), in a way that you wanna root for them viscerally.

Somewhat within the same subject, what’s a fine example to compare this film against, lately?  I’d say, Benedict Cumberbatch starrer, The Courier (2020). Of course no two stories are the same.

The stakes here are comparatively lower. Science is central to this theme. The non-stop jargon for what Nambi does for a living — besides procuring tech from civil aerospace programmes abroad — might be the opposite of the oversimplification in the Vidya Balan starrer Mangal Mission (2019), on ISRO’s Mars orbiter mission of 2013. Nambi’s work was instrumental to this Mars mission as well, where he was the project director.

But that’s not why we know him, or that there is a film on his life. It is more so a painstakingly thorough/exhaustive affidavit/testimony of an accused, in the court of public opinion, to explain how a Kafkaesque state did him in, while he sat there clueless, getting beaten up mercilessly in an unexplained nightmare of sorts. The film feels like a lawyer arguing a case for a common man caught in a strange vortex. This will interest law students more, you’d think.

And yet, while the story feels too flat for far too long, the penny really drops, when actual events start unfolding in the final 30 minutes or so. Which is when the point of this picture kicks in, and wherein resides its relevance as well.

That is, to show in broad daylight how the deep state, within this nation state — in the form of shadowy, government figures, answering to conmen politicians, indeed people associated with spying/intelligence — can actively work towards destroying innocents’ lives and reputation on command.

Because they have unfettered power to do so. And are absolutely accountable to no one, certainly not to average citizens. God knows how many such stories there are. Every page of investigative journalist Josy Joseph’s book The Silent Coup: The History of the Indian Deep State reveals a new account.

You genuinely start to feel for Nambi (he spent 50 days illegally in prison), when you compare his plight to so many activists, politicians, journalists, bureaucrats, harmless regular Joes, screwed even further, bulldozed by a state turning rogue against its own.

The creative enthusiasm mustn’t stop at a scientist. Others deserve a series of their own. Glad this film got made. It might find even greater love on an OTT platform. Didn’t mind being in the theatre, of course.

Next Story : Are we done?