Sunny Leone: Don't like leaving business in someone else's hands

As she launches lingerie brand, Sunny Leone on juggling films and multiple ventures with ease 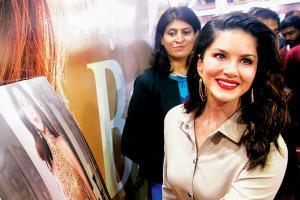 Sunny Leone at the launch of her lingerie brand. Pic/ Sameer Markande


Her fairly successful film career aside, Sunny Leone seems to be meticulously building her brand, one business venture at a time. Already the brain behind a cosmetics line and a perfume brand, the actor launched her lingerie brand, Infamous, earlier this week. "It was a market we hadn't tapped into and we thought this was the right time to dive into it. Many people had approached us earlier [to partner for similar business]. But when Daniel [Weber, husband] and I met the Bradford India group, we felt they were the right people to tie up with," she says, when probed about her latest business idea.'

Juggling multiple ventures with film assignments can't be easy. However, Leone insists that she is a hands-on businesswoman. "If I have to take time out in the middle of the night, then so be it. I can't leave it in somebody else's hands; if I do, I believe it [the result] will not be to my liking. Daniel and I work as a team, but since most of our products cater to women, I have to take a lot of decisions," she says, before quipping, "The only time I feel overwhelmed is when my three children [Nisha, Noah and Asher] are crying. Even then, we try to find a solution."

Also read: This picture of a sleepy Sunny Leone is all of us on weekdays

Three years since she launched her cosmetics and fragrance line, the actor says that the ventures have been a success among her fans. Encouraged by the positive response, she says, "The plan is to expand my brand. You can expect some more announcements in the coming months."

Also read: On the sets of Coca Cola: Sunny Leone and Mandana Karimi are having a blast!