Breaking News
Mumbai: More than 96 per cent stock in lakes, but water cuts still a possibility
Mumbai: With no solution for potholes, BMC goes back to old contractors
Mumbai Covid-19 cases jump to 1,201, highest since June 30
Mumbai: Four-storey building collapses in Borivli's Saibaba Nagar, no injuries reported
Mumbai: Pothole mishap kills couple, this time in Borivli
Home > Entertainment News > Bollywood News > Article > Our furniture was sold off Then my bed I started to sleep on floor

'Our furniture was sold off. Then my bed. I started to sleep on floor'

Citing lackadaisical responses to dramas like SOTY 2, Tiger Shroff on finding a safe haven in actioners like the upcoming War 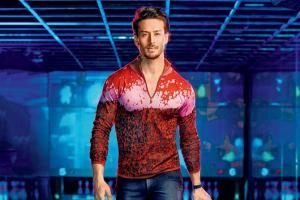 
Given that it features two of the biggest action stars — Hrithik Roshan and Tiger Shroff — that Bollywood has seen, War has rightfully amassed abundant attention from cinephiles. But, reduce the trailer to the way it is seen, and it can be argued that for Shroff, this is yet another long chase sequence spanning exotic locales, and starring chiselled torsos and bikini bottoms. He has often stated that he isn't perturbed with the notion of being pigeon-holed. He reiterates in the upcoming September edition of GQ India that being typecast is just another way of finding his identity.

"You think of Shah Rukh sir [Khan], [and] think [he's the] 'Romance King'. You [look at] Salman Khan, [and] think 'Bhaijaan'. Each one of these guys has a label. That's important in an industry that has so much competition. Every time I do something offbeat, [the audience has] not been as kind, to me. [Consider] A Flying Jatt or Student Of The Year [SOTY] 2. In A Flying Jatt, I was a bumbling superhero, afraid of heights, fights and of using powers. In SOTY 2, I was a college guy getting bullied. It didn't go down well with my audience. I don't think they could digest me coming from Baaghi 2 to being beaten up by college students."

In the early years of his career, the baggage of his father's stardom weighed on him just as heavily as Shroff senior's series of erratic financial decisions. In 2002, his mother's production, Boom, leaked on the Internet before its theatrical release. The film tanked. Shroff was 11 at the time, old enough to understand what was going on. "I remember how our furniture was sold off, one by one. Things I'd grown up seeing around us started disappearing. Then my bed went. I started to sleep on the floor. It was the worst feeling of my life." The uncertainty of those years was a powerful motivator. It's one of the reasons he won't experiment much. He'd rather do what he knows, and do it better than anyone else.

Also Read: Tiger Shroff: I've scripts that allowed me to express my passion for action

Next Story : Shilpa Shetty dances with Raj Kundra as they bid adieu to Lord Ganesh