Watch Video: Katrina Kaif handles a fan like a boss

When Katrina Kaif was surrounded by the fans for selfies, one of them pushed back her bodyguards and tried to get close to the actress 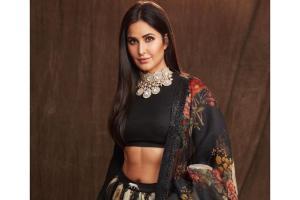 
Where there is a star, there is a fan. Their larger-than-life screen persona carries the fans away. Diehard fans can go to extremes, and one such incident occurred in the case of Katrina Kaif's fandom.

It happened when Katrina Kaif was entering the airport and was surrounded by fans for selfies. One of the fans pushed back her bodyguards and tried to get close to the actress. However, instead of losing her calm, Katrina politely asked the fan to click the photo from a little distance. She can be heard saying, "Aaramse. waha se karo".

The video of the incident went viral on social media. Check it out:

Adamant or Rowdy ?? There is a very thin line I guess but Katrina Kaif handled it with Grace as fans went crazy seeing her at #newdelhi airport! . . . #KatrinaKaif #airport #monday #instadaily #manavmanglani @manav.manglani

Isn't this a great gesture by the actress?

On the work front, the actress was last seen in Bharat. The Salman Khan starrer hit a double century by crossing the Rs 200 crore mark at the Box Office. Emerging as the biggest opener of this year, the film, which hit the screens on Eid, minted Rs 201.86 crores last month. Bharat also features Disha Patani, Sunil Grover, Jackie Shroff, Nora Fatehi and Sonali Kulkarni. Salman Khan actor sports five different looks in the film spanning 60 years, including a crucial part showcasing the actor in his late 20s, looking much leaner and younger.

She is now shooting with Akshay Kumar for Rohit Shetty's Sooryavanshi. The film has a recreation of the iconic rain song, Tip Tip Barsa Paani. The song, which was originally picturised on Akshay Kumar and Raveena Tandon in Mohra, is being recreated for Sooryavanshi. The new version will have Akshay and Katrina Kaif sizzling together.

Sooryavanshi is scheduled to hit the screens on March 27, 2020. This is the first time that Akshay has collaborated with Rohit Shetty for a project.

Also Read: Who is Katrina Kaif's 'bhaiyya'? Fans and friends curious to know