Harry Styles – the biggest draw here, may fit in perfectly but his craft is not as impeccable as his looks (as exhibited here). Olivia Wilde’s second effort at helming is rather feeble even with the sheer immaculate visual craft on display 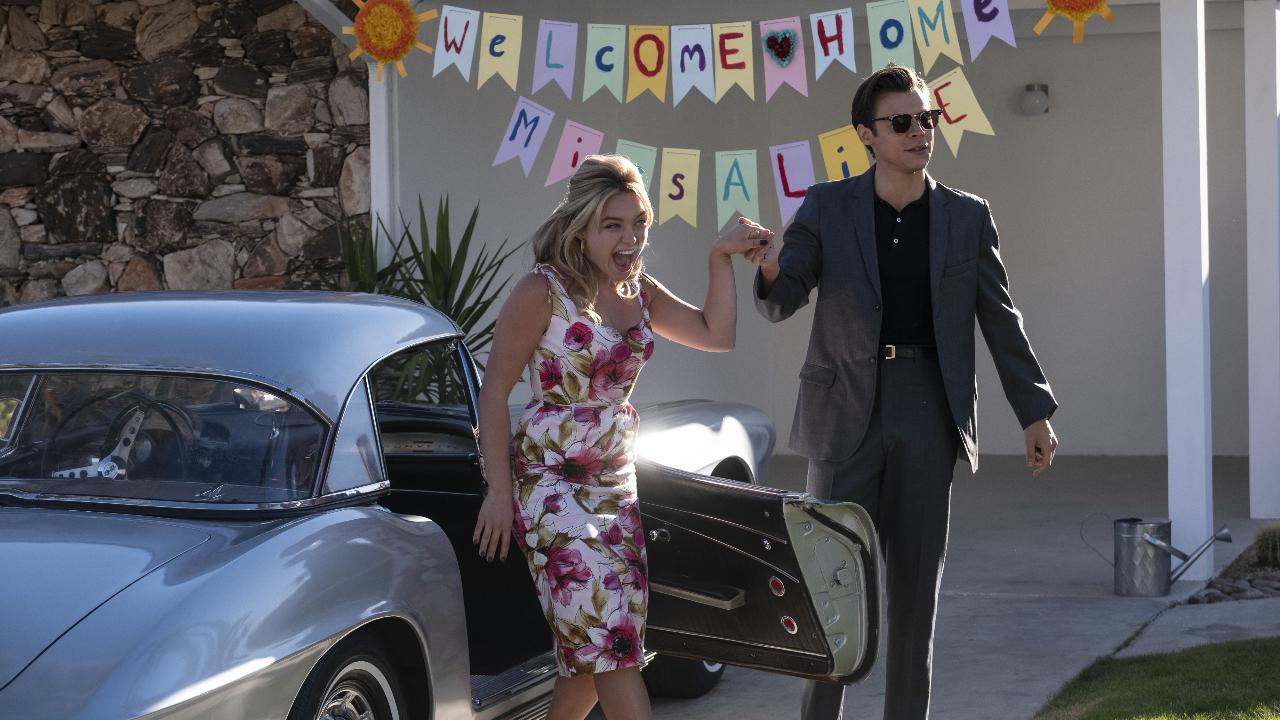 Though high-concept, Olivia Wilde’s sophomore effort as director isn’t convincing nor satisfying. It’s very showy and pristine in look but the lack of strength in characterization, staleness of story, and facile depth in telling don’t make for compelling, involved viewing. That’s not to say you won’t derive pleasure from the pristine, picture-perfect look of the actors, their sartorial perfection, sexual proclivities and ‘life-is-a-never-ending-party’ lifestyle.

The audience might feel gravitated towards this suburban Shangri-la, a town called Victory – away from the city with its minimalist, all-white, modern homes, in an idyllic haven, shining brightly somewhere in the California desert. Jack Chambers (Harry Styles) and Alice (Florence Pugh) are one of the ‘chosen’ few couples and families inhabiting this ideal of wonderment. But is it really that… is a question that gets answered towards the climactic moments? That’s when the mysterious Victory Project community unwraps warped idealism and exposes its disturbing overtones that belie all the smiling faces and perfect marriages showcased previously.

Wilde has obviously garnered inspiration from films like Inception, The Matrix, and The Truman Show - but this film never comes close, other than in the ‘looks’ department. The dark trauma doesn’t unfold with any great felicity or guile. The overwhelming perfection of the setting itself makes it an obvious beacon for a sinister mindset.

The script by Katie Silberman, Carey Van Dyke, and Shane Van Dyke feels like a rather lackluster knockoff of ‘Stepford Wives.’ The actors essaying stellar roles are pretty much famous or infamous (as per your reading of their notoriety and fan base) but their efforts at performance pale into insignificance when compared to the overwhelming perfection of the cinematography from Matthew Libatique, production design from Katie Byron and costumes from Arianne Phillips. Even Olivia Wilde’s helming, concerns itself with making it all look exquisite while ignoring conviction. While Pugh does well in a meaty role (after ‘Midsommar’) and Chris Pine exhibits some juicy villainy, there’s very little for anyone else to do. Harry Styles – the biggest draw here, may fit in perfectly but his craft is not as impeccable as his looks (as exhibited here). Olivia Wilde’s second effort at helming is rather feeble even with the sheer immaculate visual craft on display.