Rana Daggubati and Miheeka Bajaj, who recently announced their engagement and Roka ceremony, are now all set to tie the knot this year on August 8! 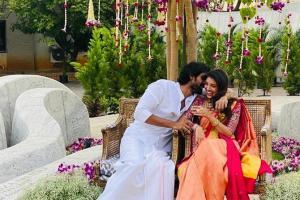 
Rana Daggubati and Miheeka Bajaj surprised everyone when they announced their engagement on social media on May 12. The actor's fans and even his friends and contemporaries from the industry showed their wishes and luck on the couple.

On May 21, the couple made it official with a Roka ceremony. And now, speaking to Deccan Chronicle, Daggubati's father Suresh Babu has revealed that his son and Miheeka will tie the knot on August 8 this year. The members of both the families would attend the ceremony and it would be held following the guidelines issued by the government owning to the Coronavirus pandemic.

In a recent interview with The Indian Express, when the Baahubali actor was asked about Bajaj and what made him think she was the one for him, he said, "For the first time, I thought we should do it quickly. So, she must have done something. When things are good, I don't ask questions. I just went with the flow. The girl was right. I can't put it in words. I met her and felt I can do this long term with her. It happened quick and in the most simple manner." He also spoke about his family's reaction and stated, "They were shocked and extremely happy. It was something they wanted since a long time. I think everyone was just waiting for this to happen. It was a moment of enjoyment for everyone."

On the work front, the actor was all set to give his fans his next film in the form of Haathi Mere Saathi, which was about to open in the cinemas on April 2, but will now release after the cinemas begin to function again!

Next Story : Trisha Krishnan's quirky bicep and tricep workout will crack you up!