He may be Tollywood star with fans all over, but actor Ram Charan has his heart in the right place 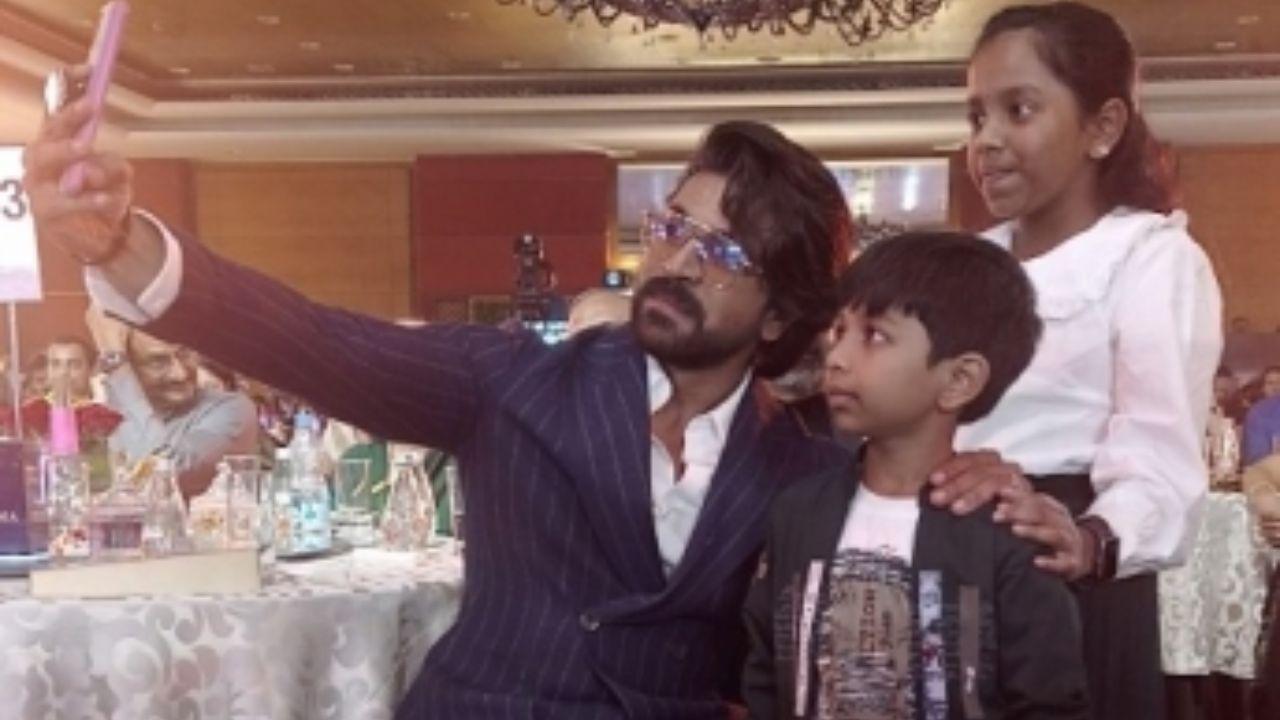 
He may be Tollywood star with fans all over, but actor Ram Charan has his heart in the right place.

A video of Ram Charan taking the mobile phone and clicking selfies with the children of late colonel Santosh Babu, who died in the Galwan Valley clash with the Chinese People's Liberation Army in 2020, has been winning hearts.

Actor Ram Charan was recently honoured for his work and contribution in the entertainment industry at an awards event.

In a video clip from the event that has surfaced on social media, Ram Charan can be seen clicking selfies with the children of late colonel Santosh Babu. The actor's gesture was lauded by fans, who called him a 'true legend.'

In the clip, Ram Charan can be seen taking the mobile phone and clicking selfies in both portrait and landscape mode with the kids. Reacting to the video, a fan wrote, "Gentleman." Ram Charan was also seen meeting and shaking hands with singer Neha Kakkar and hugging actor Sonu Sood at the event.

After Ram Charan received the award, father-actor Chiranjeevi had congratulated him on Twitter. "Absolutely thrilled for you and proud on winning the True Legend Future Of Young India Award. Bravo! Way to go, dearest, Ram Charan Appa and Amma (father and mother)," Chiranjeevi had tweeted.

Recently, Ram Charan had taken to Twitter to announce his next project with director Buchi Babu Sana. Tipped to be a sports drama, the film will see Ram Charan collaborate with the director for the first time.

Sharing the news about the yet-untitled film, which is titled RC16 for the moment, Ram Charan said he's excited. He had tweeted, "Excited about this! Looking forward to working with @BuchiBabuSana and the entire team (sic)."

As per an official statement, the project will be a pan-Indian film. To be jointly produced by Mythri Movie Makers and Vriddhi Cinemas, the project is slated to go on the floors later this month.

Last seen on screen in SS Rajamouli's magnum opus 'RRR', Ram Charan is now shooting for his upcoming yet-untitled film with director Shankar. The film, temporarily titled 'RC 15', marks the maiden collaboration between Shankar and Ram Charan. In the movie, Ram Charan is said to be playing an IAS officer. Kiara Advani also stars in the film.