Kareena Kapoor is juggling from being a hands-on-mom to retain the top actress badge, and now, the actress will also be seen as a judge in a dance reality show 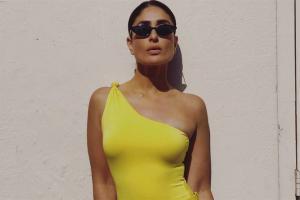 
Kareena Kapoor Khan is a name synonym to glamour, and we can't deny that Tim's mom is elegance personified! The actress is a complete package of what is required to survive in this cut-throat industry. Bebo broke all preconceived notions in the film industry and became a trendsetter by continuing her filmy career even after marriage. Earlier, there was a notion that an actress' career ends after her marriage, and cannot be taken off. But Veere Di Wedding actress has proved it wrong and excelled in every bit of it.

If that wasn't enough, Kareena Kapoor Khan created yet-another-trend by proudly and confidently handling her baby bump, when she was pregnant with her son Taimur Ali Khan. In fact, during the third trimester, she also walked the ramp for Lakme Fashion Week and became an inspiration for many women out there. So much so, that husband Saif joked about having a baby in Bandra's Mehboob Studios.

Now, Kareena is starting a new phase in her career. The actress is all set to foray into the television medium. Kareena will be seen as a judge on the dance reality show, Dance India Dance.

Talking about her debut, a source told Mumbai Mirror, "The channel has had several meetings with Kareena as she preps for her big TV debut which will be launched on a big scale. She is slated to leave for London to shoot Angrezi Medium (Dinesh Vijan’s Irrfan Khan and Radhika Madan co-starrer) in June, so the shooting schedule has been planned in a way that she can juggle both commitments. Dance performances are currently being planned on her popular songs."

A few days ago, Kareena's manager Poonam Damania shared some sizzling photos of the actress from a photoshoot and hinted towards a new beginning. Her fans and followers on social media were quick enough to guess that she was decked up to judge the dance reality show.

On the professional front, the 38-year-old has completed the shooting of her upcoming film, Good News. This film is produced by Karan Johar's Dharma Productions. Good News features Akshay Kumar, Diljit Dosanjh, and Kiara Advani. We also hear that Taimur Ali Khan has a 10-minute cameo in this film, which is about a couple trying to having a baby.

She is reported to next be seen with Irrfan Khan in Hindi Medium 2. Reports suggest that she will essay the character of a cop in this film, which is a sequel to the 2017 Hindi Medium. Not just this, she will also be a part of Karan Johar's directorial venture, Takht. Apart from Kareena Kapoor, this period drama also stars Ranveer Singh, Alia Bhatt, Vicky Kaushal, Janhvi Kapoor, Bhumi Pednekar and Anil Kapoor.

Next Story : Britain's Got Talent semi-finalist Akshat Singh: Had 20 days to prepare