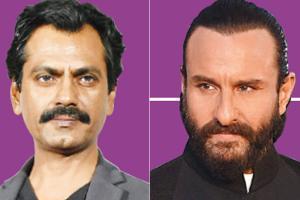 
Even as the makers of Sacred Games build buzz around the upcoming second season with perfectly-timed teasers, it may be a while before fans can go back to the universe of Sartaj Singh and Ganesh Gaitonde.

mid-day has learnt that the suits at Netflix have decided that the second edition of the Saif Ali Khan and Nawazuddin Siddiqui-starrer — which was slated to drop online on June 28, a year since its first edition streamed — will benefit from releasing in late August.

A source reveals, "There are two reasons for the delay. First, the show's leading men are preoccupied with their respective projects. While Saif is shooting for his home production Jawani Jaaneman in London, Nawaz has allotted bulk dates to his brother's directorial venture Bole Chudiyan.

Secondly, the platform's recent Indian original Leila has been winning praise. So, the head honchos wanted a considerable gap between Leila and their next big show. The series will drop online in August, with post-release promotions scheduled for September." Netflix remained unavailable for comment.