'Chaithybhumi’ is an upcoming documentary film, which captures the political and cultural significance of Dr Babasaheb Ambedkar’s memorial site in Mumbai. Filmmaker Somnath Waghmare tells us why a film on the historical site was long overdue 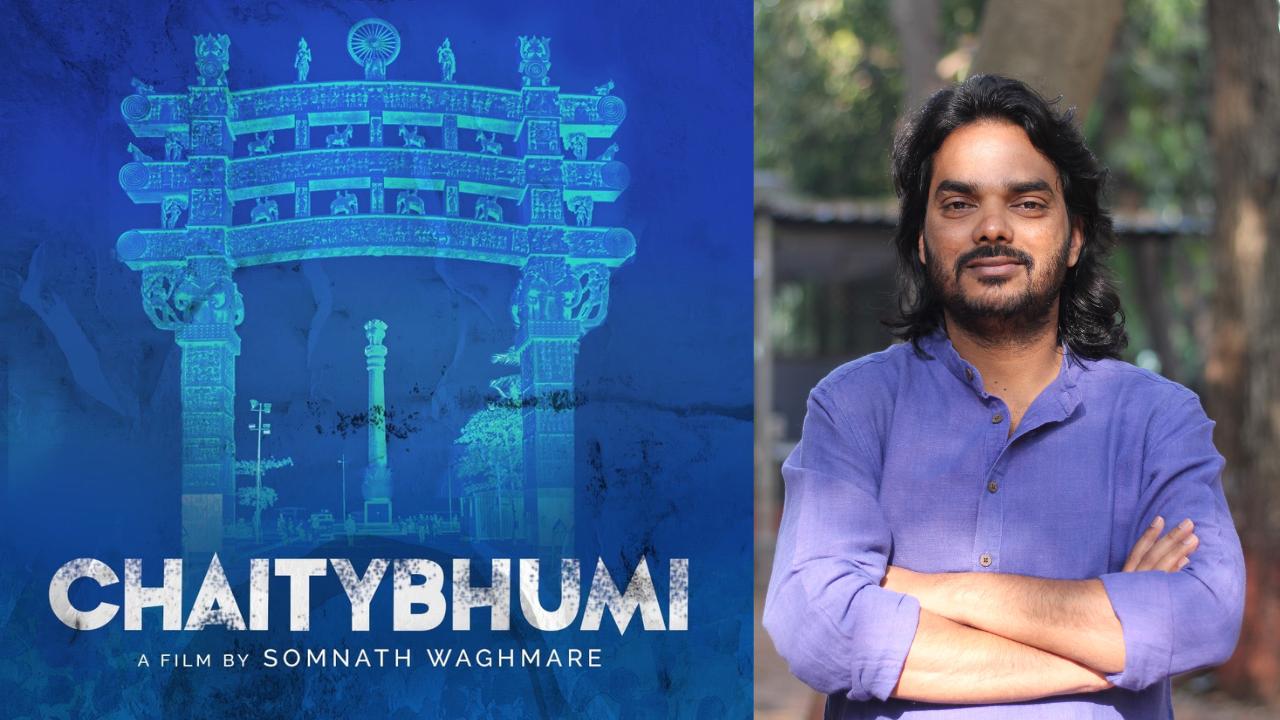 
Every year on April 14 and December 6, lakhs of visitors across India register their presence at Chaithyabhoomi, the cremation site of Dr BR Ambedkar in Mumbai’s Dadar area, to pay respects to their leader and revisit his works on his birth and death anniversary. Adjacent to the city’s well-known Dadar chowpatty, Chaithyabhoomi is one of the places significant to understanding Bahujan history and Ambedkar’s life in Bombay, but has never been offered a prime space in the popular art and film records of the mainstream media’s documentation of the city’s culture.

Filmmaker Somnath Waghmare, through his upcoming documentary film ‘Chaithybhumi’, envisions throwing spotlight on the memorial’s presence. The film will bring to the fore diverse aspects of the site, while exploring its cultural and literary vibrancy and the memory of its legacy in the minds of those who seek joy, hope and a sense of belonging in its shelter. While the space remains open throughout the year, Waghmare’s film focuses on the events during the December 6 gathering that paints the city blue for several days.

The film will be presented by filmmaker Pa. Ranjith, who is well-recognised for spearheading an anti-caste movement in the Tamil film industry. Scheduled to be released in 2023, the documentary will be screened at film festivals, community and university screenings. Plans of OTT release are underway.

The trailer of ‘Chaithybhumi’ will be released on Neelam Social, an online platform run by Ranjith in the first week of December 2022.

What makes the memorial key to understanding the celebration of Ambedkarite culture in Dadar, which is known for its strong Hindutva politics too? In conversation with Mid-Day Digital, Waghmare answers this and tells us about how filmmaking is a privilege.

Here are the edited excerpts from the interview:

What inspired you to make a film on Chaithyabhoomi?

Waghmare: It was not a planned film. Initially, my friends and I planned to just document what happens at Chaityabhoomi. We were there to simply record the music, take some pictures, interviews and videos for a week every day until December 6, before the Covid-19 pandemic. But, the footage was interesting and inspired me to make an entire film. I met old people from the community, spoke to other scholars and activists and went out to shoot during the pandemic.

Dalit movement, realities and Ambedkar have been continuously ignored by Bollywood and the Marathi film industry here. Dr Ambedkar lived in Dadar, but there is no reference of a mass leader like him in the Hindi films. Similarly, the history of Dalit panthers is also not referred to. In films such as Achhut Kannya (1936) and Sujata (1959), one can see references of Gandhi in both films, but not Ambedkar.

Today, Ava DuVernay, noted Black filmmaker from America is making a film on Ambedkar. In the past, Muslim filmmakers and actors have done some justice to Ambedkar in films like Dr. Babasaheb Ambedkar (2000), but for Bollywood, Dalits and Ambedkar are not a part of their imagination. So, that’s one of the reasons I wanted to make this film.

What place does Chaityabhoomi hold in your life and work?

Waghmare: I am a part of the community and I am making the film from an insider perspective.

I am not from Bombay, but Chaityabhoomi and other places significant to Dalit history are a part of my life. This film for me is like my community’s history and my community’s gathering. I have visited Chaityabhoomi as a child several times and even during my education in the city. Many people across villages plan their trip to Chaityabhoomi a month in advance in April and December. I have always observed how this place brings a community together through books and its relevance in culture politics.

When an outsider makes a film on Dalits, our people are always victimised such as in Anubhav Sinha’s Article 15. That film is very problematic. And they have their own pattern, where they are not romanticising the dominant caste, but they will stick to their way of creating an imaginary person from the dominant caste community who will become the Dalits’ saviours.

How does the film explore the politics and cultural significance of the area?

Waghmare: Ambedkar is the only global leader, whose followers, almost 20-30 lakhs followers visit Chaityabhoomi every year, uninvited, to pay their respects on his birth and death anniversary. No other Indian leader, including Gandhi and Nehru, has achieved this massive following in present times and Chaityabhoomi is the only place in the world where people visit regularly. My main aim was to explore why people still come here and what is the space politics of the area in my documentary. When you visit Dadar during the first week of December, it is interesting to note the reactions of the location’s own native people. It arises from the smallest observation of why in Dadar’s Shivajji Park, the lights are switched off in most of the apartments on December 6.

Babasaheb’s own house is in Dadar, where Chaityabhoomi is located. The film traces the public memory of Ambedkar as a leader, the rise in his followers globally and media bias towards his history and celebration.  For example, for media organisations the day is synonymous with traffic jams and there is no thought or discussion on how and why people across India visit Chaityabhoomi every year. This social perspective is completely ignored.

Though the event is supported by the state and municipality, it is planned by the community. Among the people who visit the place, there are volunteers in huge numbers from the Samata Sainik Dal, almost 3000-4000, who take care of visitors. There are over 1000 book stalls and it is larger than any other fancy literature festival with masses, from labourers to bureaucrats. My film attempts to trace the leader’s space, followers, hatred towards this gathering and the cultural politics of the region.

What were the major challenges you faced during the process?

Waghmare: Documentary is like a painful process as it requires you to go on field and documenting a large gathering is tougher. Mainly, filmmaking is a privileged industry and we don't have any privilege in terms of financial resources and familial property, which enables one to engage with it full-time as it is for those dominating the industry now. I don't have such a support system.

Resource is the main problem, when it comes to production and sponsorships. The question is also about where to release the film once it is ready. Will OTT platforms like Netflix and Amazon accept a film like Chaithybhoomi, which deals with masses or are they looking for typical Bollywood content? I could collaborate with Pa. Ranjith, because he is supportive and accessible. He's a big filmmaker, renowned, but he's very accessible, while many other filmmakers are not.

Was a film on Chaityabhoomi long overdue, especially when Dr Ambedkar’s life and works have an indelible mark on the city of Mumbai?

Waghmare: People in the mainstream Bollywood come with a lot of caste privilege and are producing their own caste stories, mainly romanticising their supremacy. They have a strong anti-Dalit attitude, which is why they are ignoring Ambedkar, his people and stories. And with higher education, there are people in the industry who are rising to prominence from the community who are democratising the media. This is bringing up the content on Ambedkar and when an American filmmaker is making a film on Ambedkar, it will definitely reflect on India. Bollywood will never think of diversity. If I made a documentary on Chaityabhoomi, at least it would be in the public domain that this happens in Mumbai and there is production of alternative content.

What does it mean to the people from the community?

Waghmare: Today, a presence on the digital medium or in films, offers people happiness. So it's like, they also see their representation, and the fact that someone is telling their stories, it's empowering. A film provides empowerment.

Waghmare: I think they need to study at least; they can do a master’s in anthropology, psychology, political science, sociology, or just go to a film institute and study to understand society. If we just criticise Bollywood and their hegemony, it won’t work. We also need to produce our films. So first we need to study, understand society, then work with someone sound and a sensitive filmmaker and then start our own work. Don't start making films directly after graduation.

For resources, I believe we need to institutionalise the production aspect of it. We have recently launched our own production house, ‘Begumpura productions’.  If people from the community are interested in filmmaking, our collective can help them with resources. There is a need for such community institutions.

Next Story : Protest humour, in process: ‘Blue material’ comics on the many ways of engaging with caste in comedy