According to Brihanmumbai Municipal Corporation (BMC), as many as 78 members of Govinda troupes had been injured in Mumbai as of 6 pm 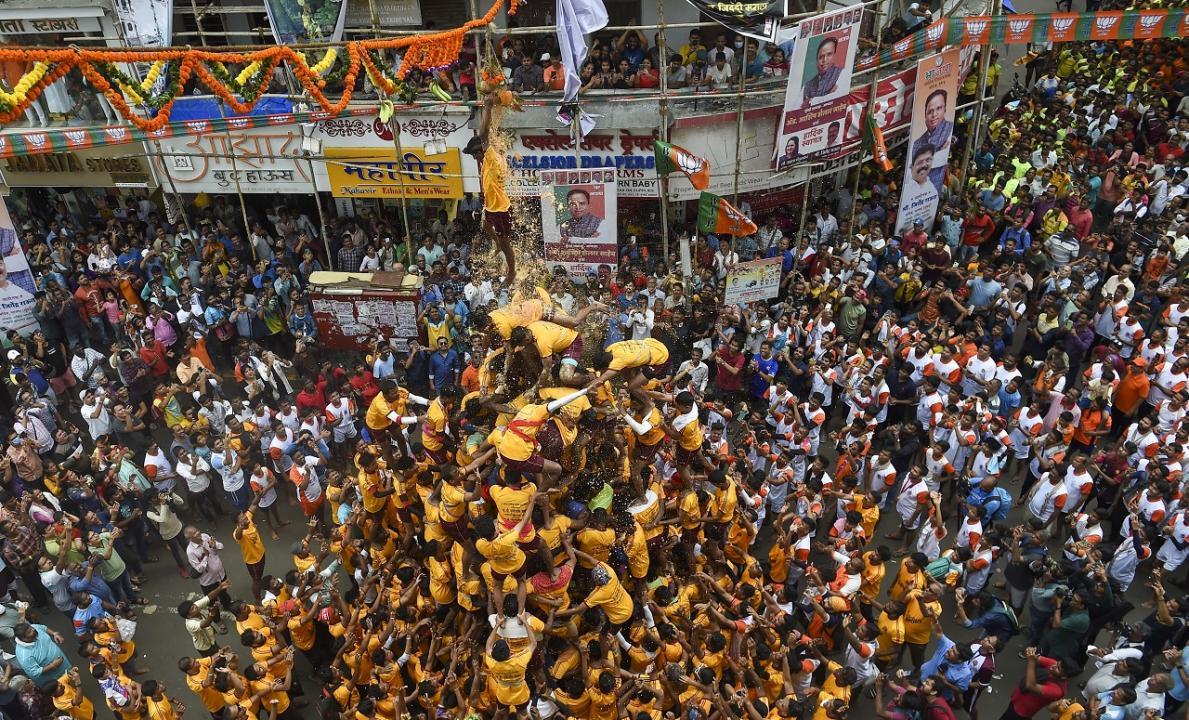 Govinda pathak forms a human pyramid to break the 'dahi handi' at Dadar in Mumbai. Pic/PTI


Dahi Handi, which is part of Krishna Janmashtami festival, is being celebrated on a grand scale in Mumbai and its neighbouring areas on Friday, August 19.

As part of the festival, youngsters (called 'Govindas') make human pyramids to reach an earthen pot containing buttermilk suspended mid-air, and break it. It symbolises victory through unity.

The festival is celebrated on a large scale in Mumbai metropolitan areas.

According to Brihanmumbai Municipal Corporation (BMC), as many as 111 'Govindas' or Dahi Handi participants were injured while forming human pyramids during Krishna Janmashtami celebrations in Mumbai.

While most of them were discharged after treatment, 23 participants were admitted to hospitals and their condition was said to be stable, informed a release issued by the BMC.

Thirty persons were treated at the civic-run KEM hospital, followed by 12 at GT Hospital, 11 at Nair hospital and 10 at Rajawadi hospital, among others.

Maharashtra Chief Minister Eknath Shinde on Thursday had informed the state Legislative Assembly that the government has decided to accord adventure sport status to Dahi Handi.

The chief minister had said that participants or their families will be provided with compensation in case of fatal or other injuries suffered by the players during the formation of human pyramids.

He further said that in case of unfortunate death of a participant during the formation of human pyramids, his or her kin would get Rs 10 lakh as compensation from the state government. A player suffering serious injuries would receive Rs 7 lakh, while those sustaining fractures would be paid Rs 5 lakh.

Next Story : Dahi Handi: Govindas to soon plan trip from Mumbai to Spain for learning new techniques as part of adventure sport