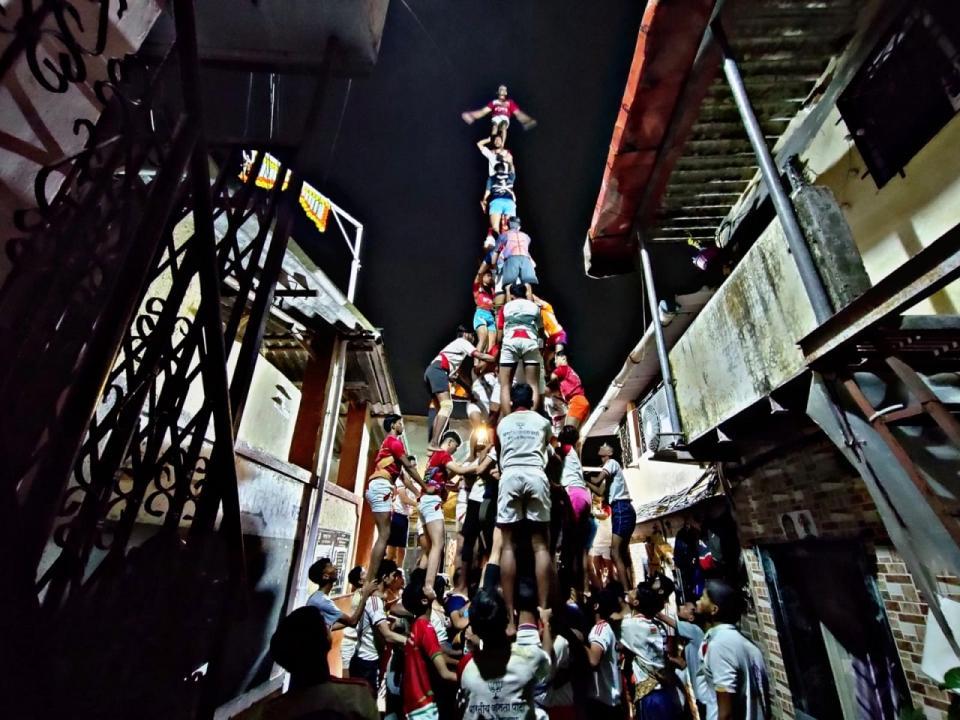 
After two years, festivals are being celebrated without restrictions in India. With no pandemic-induced restrictions in Mumbai for Krishna Janmasthami and Ganeshotsav, the Govinda groups are ecstatic about the celebrations.

Owing to a two-year break, many are lacking the fitness levels they had before the pandemic.

Jai Jawan Govinda Pathak in Jogeshwari started the practice early this year as the two-year Covid break and work-from-home culture has resulted in a decrease in all levels of physical activities. “Due to the two-year Covid break, this year we began to practice a bit early. This year we started a month earlier than usual. We generally practice for two months, but due to the pandemic break everyone had gained weight. We start our practice in June or July but this year our coach, Sandeep Dhawale, started our fitness exercises a month early,” said David Fernandes, who is the vice-captain of the group.

Sharing how the Covid break made them lazy, Fernandes said, “Members who weighed 60 kgs, now weigh 70 kgs with no physical activities and the work-from-home culture has added to it.”

Jai Jawan Govinda Pathak was formed in 2000 and they created a Guinness World Record for making a nine-tier human pyramid in 2012.

Also Read: Dahi Handi: Only 400 Govinda pathaks in Maharashtra have insured themselves

“This year too we will put up a nine-tier human pyramid, and only if our coach insists then we will go up to 10,” he said.

Echoing similar sentiments, Avinash Rane of Aryans Govinda Pathak from Jogeshwari said, “We started our practice on June 5 because we knew our members had gained weight and they had lost touch with the basics. We practice in a ground located at Majas wadi in Jogeshwari East.”

“In 2019, we made an eight-tier pyramid which we plan on making this year too. We carry all the safety gears necessary while making these human pyramids,” he added.

With no restrictions and after a break of two years, the Govinda pathak is more excited than ever. “We look at it more as a sport than a festival. Even people in Spain do it. The difference is how we make the pyramid and people there have a different technique,” Rane shared.

The Aryans Govinda Pathak was formed in 2011 and were the winners of the 2019 RedBull Jod Ke Tod event. While explaining how they won the event, Rane said, “Till 2019, RedBull, which hosts many sporting events, used to hold a competitive event called RedBull Jod Ke Tod. The event was making the fastest human pyramid of five-tiers. We won the event by making the fastest human pyramid of five-tiers in just 11.67 seconds, which is still unbeaten. RedBull has now stopped the event. We urge them to start that again.”

Meanwhile, Kranti Nagar Utsav Samiti Girgaon, which was formed in 1947, is celebrating 75 years of its Govinda pathak.

Kranti Nagar, was formerly known as "Sarkari Tabela", as it used to be the Government Stables for Horses during the British Raj. Social reformer Sane Guruji renamed Sarkar Tabela as Kranti Nagar and thereafter the settlement came to be known as Kranti Nagar.

“On the occasion of completing 75 years this year on Narali Purnima, we organised a programme and felicitated around 52 Govinda pathaks from South Mumbai,” informed Shivaji Rahane, president of Kranti Nagar Utsav Samiti.

Speaking about Govinda practice, Rahane said, “The practice is on in full swing. Usually, we put up a five-tier pyramid but this year we plan to put up a six-tier pyramid.”

The Govinda pathak is eager about this year’s Dahi Handi as there are no Covid-19 restrictions,” Rahane concluded.