The agitating farmers from Maharashtra decide to walk to Azad Maidan in the night, so Mumbaikars don't suffer 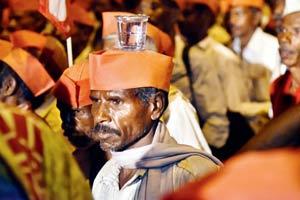 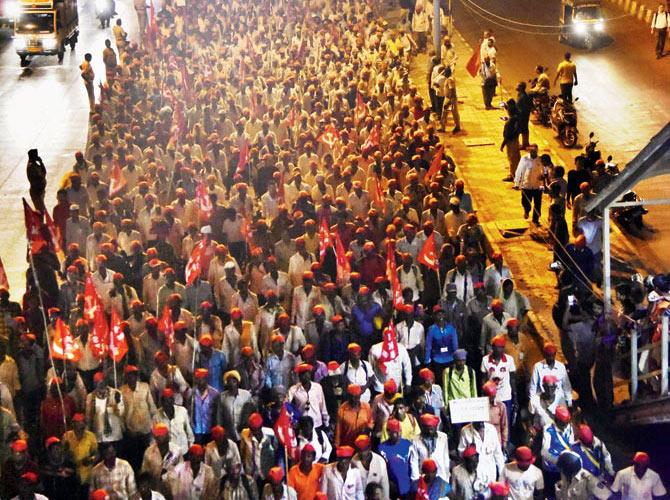 As the protesting farmers entered Mumbai in the scorching heat, scores of Mumbaikars turned up to welcome them with refreshments at Mulund, Vikhroli and Ghatkopar. By afternoon the tired farmers made their way to the KJ Somaiya ground where authorities requested them to terminate their march, instead of walking to Vidhan Bhavan, citing SSC board exams as a reason. The protesters showed consideration towards the students and agreed to march on Sunday night instead of the next morning.

The compromise came after the government showed readiness to negotiate with them. It sent an emissary to speak to the march leaders last afternoon, before the farmers reached their night halt venue — KJ Somaiya ground. Medical education minister Girish Mahajan invited a delegation of the long march leaders, after their six days of walking in the scorching heat, at Vikhroli police station to discuss their problems, and also extended an invitation for a talk with Chief Minister Devendra Fadnavis.

The 180-km long march, from Nashik to Mantralaya, was started by the All India Kisan Sabha (AIKS); it reached Mumbai's eastern suburbs yesterday. The farmers are upset with the government for not giving them a complete loan waiver, besides several other issues. 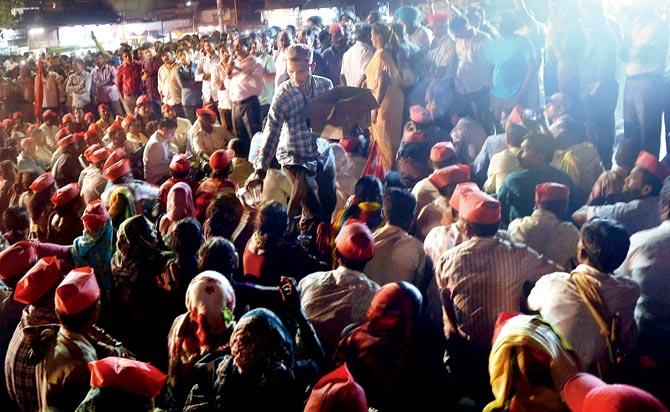 On-foot action
According to the Akhil Bharatiya Kisan Sabha (ABKS), 30,000 farmers are already part of the protest, and have marched to Mantralaya. Their demands include a complete loan waiver, implementation of the Swaminathan Commission recommendations, which gives a fair price for farm produce, change in the river-linking scheme, proposed to be implemented in Nashik, Thane and Palghar, so that tribal areas don't get submerged, and the government paying their electricity bills.

Mahajan said, "The government was ready to discuss their demands. But the leaders told the minister that the government must assure them in writing that all demands would be met, or they would lay siege to Vidhan Bhavan from Monday." 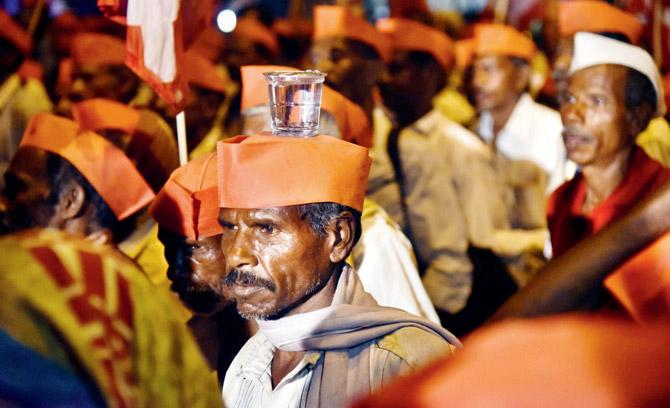 While the initial plan was of leaving Somaiya ground on Monday morning and head to South Mumbai, the leaders decided to start at night for the sake of exam-stressed students. AIKS president Ashok Dhawale, speaking to mid-day late on Sunday, said, "We will try to reach Azad Maidan in the morning, so that students appearing for their board exams are not disturbed. A delegation will be meeting the CM tomorrow [Monday] to put forth our demands."

Political play
Meanwhile, Opposition parties did not leave the opportunity to score some political mileage by showing support to the march. After NCP declared its support to the protest, the Congress too jumped in the fray with Ashok Chavan tweeting support to the farmers and taking a dig at the CM, saying he should "stop being adamant and fulfil all their demands".

Today, Traffic mvmt will be normal like any other day. Tr R no diversions proposed on any road in limits of Mumbai 4 the proposed ‘Long March’. We will be posting updates as and when required. Don’t believe in rumours. Contact @MumbaiPolice & Dial 100 for any such verification.