Seven detained as commuters stage protest for not being able to board their usual train, which has now been replaced with an AC local 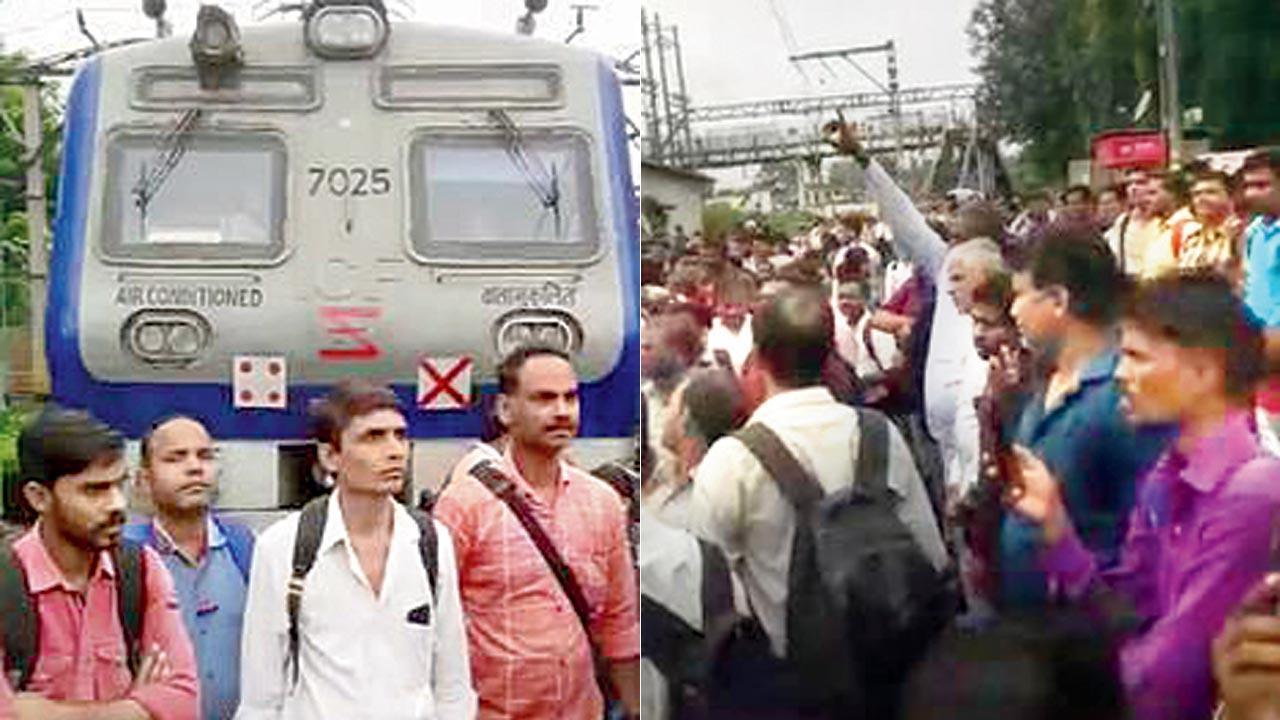 Angry commuters block an AC local at Kalwa carshed on Friday morning; (right) The RPF and GRP were called in to disperse the crowd


The police detained seven commuters at Kalwa carshed on Friday morning after rail users could not board their regular train, which has now been replaced with an AC local. The protest also delayed the air-conditioned train.

It is an age-old practice by commuters to board an empty local starting its journey from Kalwa carshed to Mumbai CSMT. When regular commuters can get it at Thane station, they find it already full.

“Today, they could not get into this empty local train as it was an AC train and the doors were closed. This led to anger and protests and a rail roko. The main lines remained unaffected. The Railway Protection Force and Government Railway Police dispersed the mob, and also called the city police to handle the situation. The city police detained seven protesters for the rail roko,” a senior railway official said.

Also Read: Borivli building collapse: They saw cracks forming and escaped in the nick of time

The Central Railway on Independence Day had announced replacing 10 regular non-AC locals with AC ones from August 19. While the AC train users welcomed it, non-AC commuters objected to adding AC trains at the expense of the regular locals.

Earlier, commuters from Kalwa-Mumbra and Diva had threatened a mega protest on August 6 saying there were reportedly no benefits, no halt of fast trains and no improvement in quality of life even after operations began on the new 5th and 6th lines. The Mumbai Rail Pravasi Sangh had on July 23 also listed demands to get the crowding issue resolved, but later put off the agitation after talks with railway officials. Last month, an online petition had also been floated by commuters for the same demands.

“Despite talks, there has been no improvement at Kalwa. There is so much crowd at the station and it swells further as the AC train arrives and no one gets into it,” a commuter said.

CR officials said the protest was at the carshed entrance and one service was affected. “Seven people have been detained by the city police for nuisance,” a CR spokesperson said.