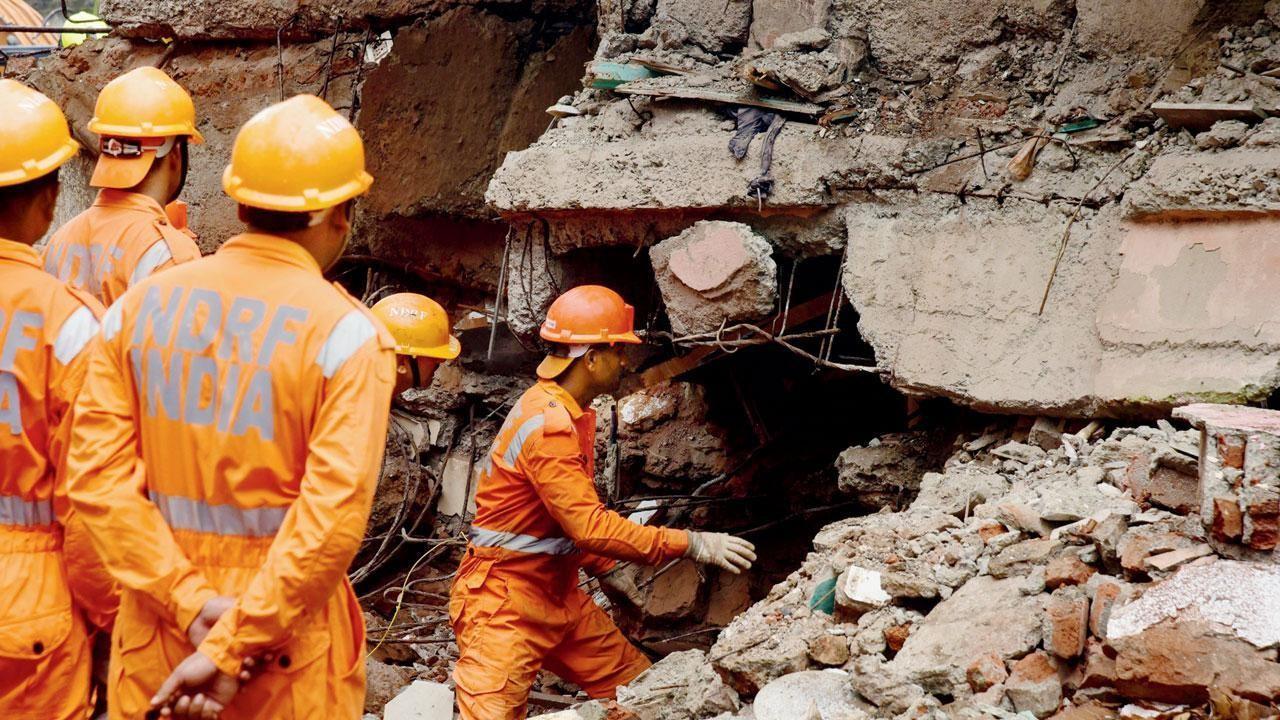 Rescuers look for survivors in the rubble of Naik Nagar society on Tuesday. Pic/Atul Kamble


Days after the Kurla building collapse incident, the extended families of the deceased gathered at Rajawadi Hospital to take the bodies back home on Wednesday morning.

At least 19 people died after a building that was declared dangerous by the BMC in 2016, collapsed on Monday night.

Families who survived the collapse believe they were blessed with a “second life”. Two such survivors are the 42-year-old mother and 17-year-old son duo. Out of the three patients admitted, Devki Badiya and her son Preet will be discharged today from Rajawadi hospital to perform last rites of her husband Ramesh Badiya.

Speaking about Devki’s medical condition, Ratan Kanvar, her cousin brother said, "She is unable to move her leg. We are arranging a wheelchair for her so that we can take her home for her husband's last rites. While her husband was removed out of debris yesterday evening, today morning we informed her about his death."

Preet and his mother were trapped inside the debris for round 12 hours. According to relatives, Preet saw the debris collapse on his father and when he was rescued, he was sure that there are less chances of his father’s survivial.

Chetan Maheshwari, nephew of Devki, says that the mother and son were trying shouting for help from under the debris for 12 hours.

Maheshwari who travelled from Gujarat to Mumbai after hearing about the incident, said, "They ran out of their own house when they sensed that the building is shaking. But before they could reach the staircase, it collapsed and they managed to get into a neighbour's house. They got a second lease of life. The neighbour in whose house they ran into died, but these two survived. It is nothing less than a miracle."

Besides them, another family's relatives were completing the official formalities of taking all three deceased family members back home for the last rites.

Sanjay Asure, a close relative of Gaikwad family, said, "They shifted eight months ago in this building. While they stayed in the opposite building earlier, affordable rent made them shift to this building. We heard about the building collapse incident on Monday night through our relatives who stay in a nearby building. We were hoping that they survive but all the three members of their family lost their lives."

Next Story : Maharashtra govt approves renaming of Aurangabad as Sambhajinagar, Osmanabad as Dharashiv