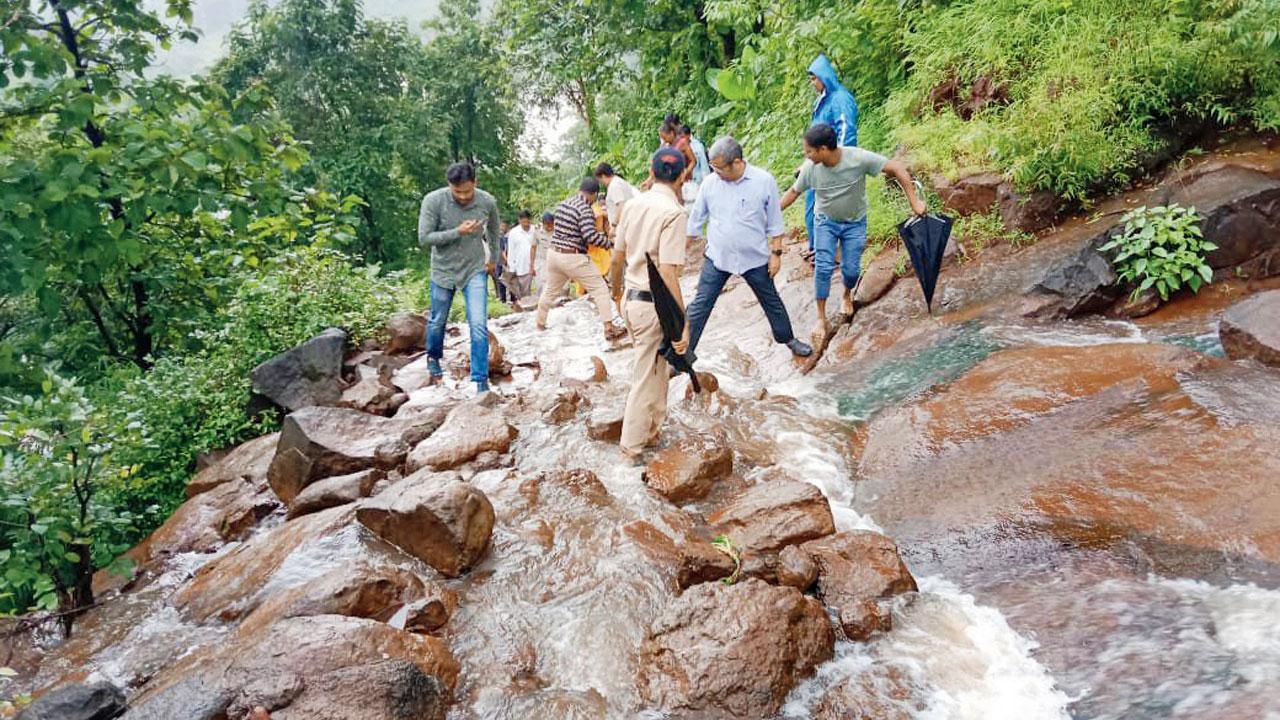 District officers and their teams visited the village to figure out a way to build roads. Pic/Hanif Patel


Senior government officers on Wednesday visited the tribal hamlet of Palghar district where a woman lost her twins moments after delivery last week. Sent on a mission to understand how the government can connect the remote village via roads, the district health officer later pointed out that the tribals, particularly pregnant women, don’t give importance to their health.

District Health Officer (DHO) Dayanand Suryawanshi, Palghar Chief Executive Officer Siddharam Salimath and Mokhada taluka Sub Divisional Officer Ayushi Singh experienced on Wednesday the conditions the locals have been braving for decades. The officers and their team members walked the hilly terrain for 4 km, in heavy rain, to reach Markatwadi pada in Botoshi village. Local social activist Tukaram Pawar told mid-day, “We now hope that some initiatives will be taken by the government, as we have been suffering even 75 years after Independence.”

Dr Suryawanshi said the local tribal people, especially pregnant women, do not give importance to their health. “If a woman is pregnant, she needs to get in touch with the local health staff. One ASHA worker stays in the same village and she had told the woman (Vandana Budhar) not to work in the field, but she did not listen to her,” he added. “The village is not connected with a road. We have certain identified pockets where road connectivity is required. The district collector has called a meeting on Thursday to discuss sanctioning of roads, building which would take a long time.

“The collector asked us to visit the area and take stock of the situation, and come up with a solution, so that problems like premature delivery or other health emergencies can be handled on time,” Dr Suryawanshi added. He said they would submit a report on their findings at the meeting with the collector on Thursday.

“I would suggest to the collector that pregnant women in the remotest tribal pockets should be in constant touch with our health workers, including ASHA workers. There should be no communication gap,” he added. CEO Salimath said, “There is no road in Botoshi village. We visited the area to understand how a road can be built and what method can be applied.”