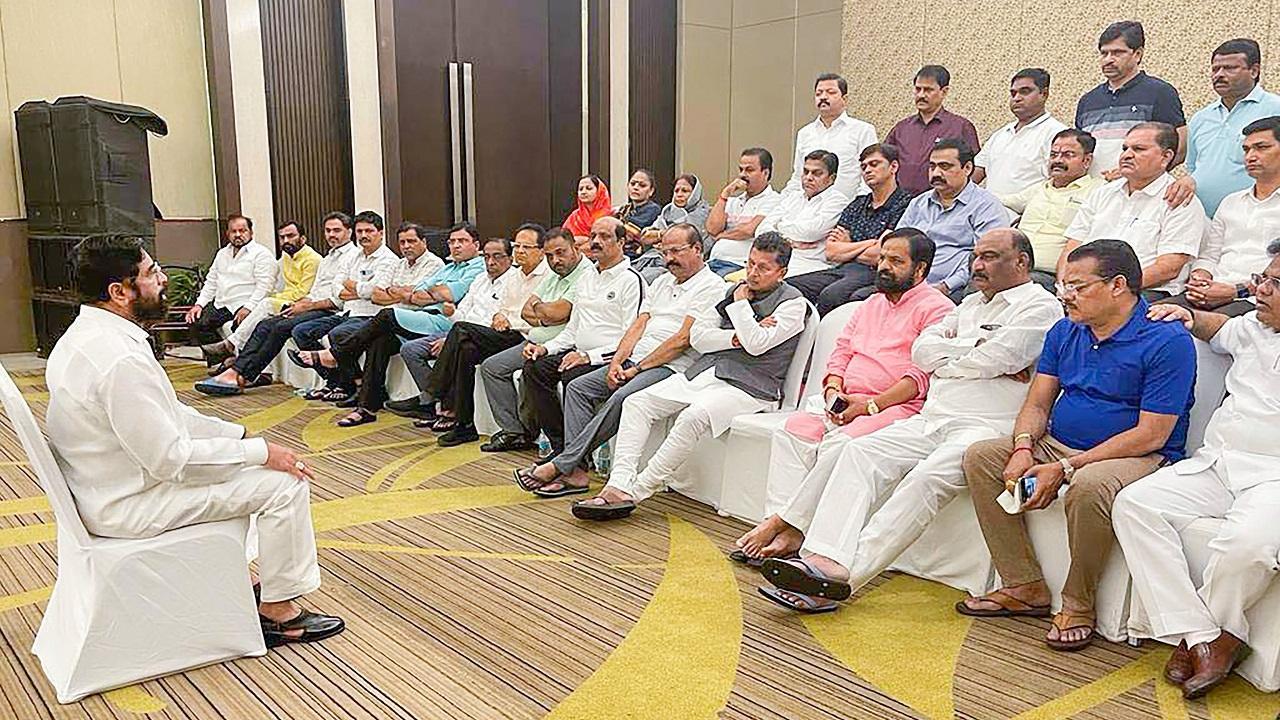 The rebel MLA further demanded recognition for their faction and warned of going to court if it is not done and denied the role of the BJP behind their revolt.

In a virtual press conference from Guwahati, where Shinde and other rebel MLAs are camping, Kesarkar said they have not left the Sena, but named their group as Shiv Sena (Balasaheb).

"We are still in Shiv Sena, there is a misunderstanding that we have left the party. We've just separated our faction. We have a two-thirds majority to follow the path we wanted. Our new leader has been chosen by the majority. They didn't have more than 16-17 MLAs," Kesarkar said.

Just 16 or 17 people can not replace the group leader of 55 MLAs and the rebel Sena faction will challenge in the court the order of Maharashtra Assembly's Deputy Speaker Narhari Zirwal replacing Shinde as Shiv Sena group leader, he said.

"The MLAs had told party president Uddhav Thackeray that we should stay with the party with whom we had contested election....When so many people voice the same opinion, there must be some substance in it," he said, referring to the Shinde group's initial demand that the Sena should revive its alliance with the BJP and sever ties with Congress and NCP.

He also said the Shinde group will prove its majority in the Assembly but "we will not merge with any other political party."

"We have decided to name our group Shiv Sena (Balasaheb) because we believe in his (Bal Thackeray's) ideology," he added.

Asked about Uddhav Thackeray-led faction's objection to the use of party founder Bal Thackeray's name by other groups, Kesarkar said, "We will consider it."

To a question when the rebel MLAs would return to Mumbai, he said they will come back "at an appropriate time."

"At present, there is pressure, we don't feel that it is safe to return," Kesarkar said, referring to incidents of attacks on offices and residences of rebel MLAs in Maharashtra.

The rebel MLA refuted the speculations of the new group merging with any party and said that their faction will be given different recognition.

"There's no need to merge, our faction will be given different recognition and we aren't merging with any other party," he said.

Kesarkar denied speaking against Uddhav Thackeray and said that they "respect" the Chief Minister.

"Recognition should be given to our faction, if it isn't given, we will go to court and prove our existence and numbers. We have numbers, but we respect CM Uddhav Thackeray, we won't speak against him. We must follow the path on which we fought Assembly elections," he said.

"No party is paying for our expenses (of hotel accommodation), our leader Eknath Shinde called us and we came and stayed here (Guwahati hotel); will pay the expenses. BJP isn't behind all of this," the lawmaker added.

The majority of Shiv Sena MLAs have shifted their loyalty to Eknath Shinde and are camping in Guwahati, plunging the Maha Vikas Aghadi (MVA) government led by Chief Minister Uddhav Thackeray, who heads the Sena, into a crisis.