Multiple tasks cut out for Ekanth Shinde and Devendra Fadnavis 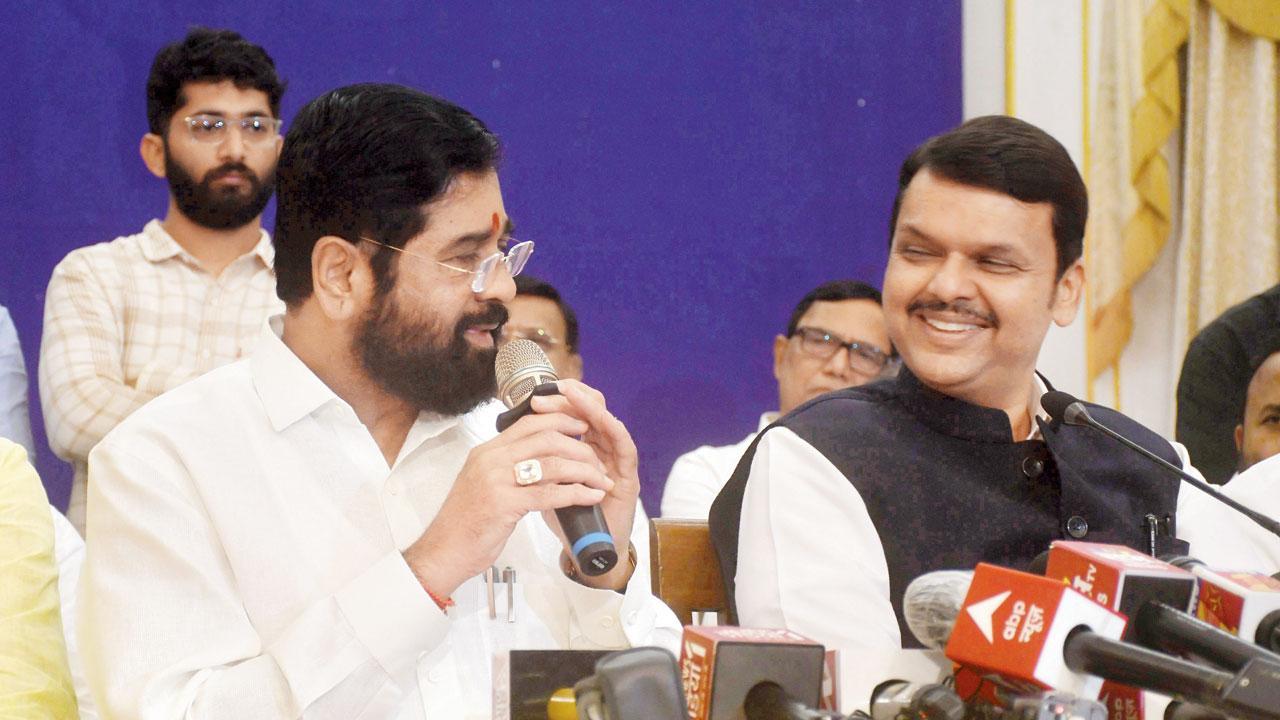 Ultimately it will boil down to Shinde’s handling of his flock and the BJP may or may not have him complete the time till 2024. Pic/Ashish Raje

Assuming that Sena rebel general Eknath Shinde must have taken into account advantages and disadvantages before finalising a collaboration with the Bharatiya Janata Party, the task is cut out for him, the new chief minister, and also for the other power centre in his cabinet, and the BJP’s lead, Devendra Fadnavis. Prima facie, Shinde’s advantage is that he does not have a direct boss, but will be under constant scrutiny from the ally. Any wrong move, especially the one that goes against the BJP, will mean trouble for him. If the dramatic events that led to his appointment are any indication, then, Fadnavis will have to handle more than what he expects till this government runs. His role will be like a jam spread between two slices of bread. He has to taste better for whosoever among Shinde, the big daddies of BJP, party MLAs and his disappointed supporters on the ground, in whatever political conditions.

This piece has been written before the Shinde Sarkar faces a floor test on Monday. Assuming that the government would go through it successfully because it won the Speaker’s election with a thumping margin on Sunday morning, we have jumped the gun to analyse what lies next. This alliance has not come into being only for keeping the Uddhav Sena out, but its architect, the BJP, has multiple goals ahead and it will be no less ruthless than we have seen in the past to achieve results. On the anvil are things beyond the obvious common between the BJP and Shinde Sena.

Pieces of advice have been pouring in for both Shinde and Fadnavis. We will not mention all of them here, but can’t resist sharing the ones that have come from the Maharashtra Navnirman Sena president Raj Thackeray, who may not have excelled politically of late but reads situations far better than many others of his rank. The politically aware may not need to decode both messages as they are very clear.
Raj asked Shinde to be alert and take measured steps. “Providence has given you this opportunity. I hope you will prove it with your performance.”

MNS chief’s comment on Fadnavis was more telling. “I won’t say whether your appointment as the deputy chief minister is a promotion or demotion, but I would only say that when a target is to be hit with an arrow, the bowstring is pulled back. The string being pulled cannot be called its demotion,” he said.

Is it only about the two leaders? Not entirely, it is about their respective political bodies. One is fighting a legal battle for getting recognised as a separate group of the Sena in the legislature and the Supreme Court and later to the Election Commission of India to get branded as the original Sena and have its election symbol. The other is the BJP, which has succeeded in toppling the Uddhav Thackeray, the Congress and Nationalist Congress Party government in two and a half years. The BJP’s focus will be to strengthen itself ahead of all forthcoming elections and weaken the opposition that has been deprived of power.

The Shinde Sena will take care of the Uddhav Sena in association with the BJP and also target the NCP that has benefited most from the Maha Vikas Aghadi government and will claim the opposition leader’s post citing the Sena’s depleted strength and if not, the lack of a tough man in the ‘left-over’ Sena ranks that can take on the BJP in the floor of the house. Though the three parties have decided to keep the MVA intact in the adverse times, the claim to the opposition leader’s position may trigger a clash between the Sena and NCP because the former will be at a loss since it could not get its nominee elected as the speaker. It will be advantageous for the NCP again if it gets away with the opposition leader’s post, a significant one, which helped Devendra Fadnavis, raise a storm against the MVA.

As power breeds differences, the Sena experienced it and suffered fatally from it, Shinde’s group cannot be devoid of any such issues. Complaints will crop up and grievances will turn serious if not addressed properly. Shinde will have to balance things, so will Fadnavis, because the very agenda that propelled the rebellion in the Sena—a cry against injustice in the previous government will be fresh in the minds of the MLAs. Its insistence on discipline and supposedly an upper hand it is expected to get in the governance (the distribution of portfolios, especially the important ones, remains to be sorted), the BJP should be able to manage unrest if any. But Shine cannot afford to let his representatives through the same grind again.

Ultimately it will boil down to Shinde’s handling of his flock and the BJP that will make him complete the time till 2024. The BJP hardly falters; it makes moves with clinical precision and throws shockers in between. A reluctant Fadnavis has put everything behind and gone into overdrive to bring the BJP’s electoral, social, developmental and political agenda back on the table. He will execute it under the orders from the high command. What Shinde has on his mind, apart from seizing the Sena’s control, will be known to us as the months go by, without springing surprises.

Next Story : Mumbai: Rise in heart attack post Covid or vaccination cause for concern