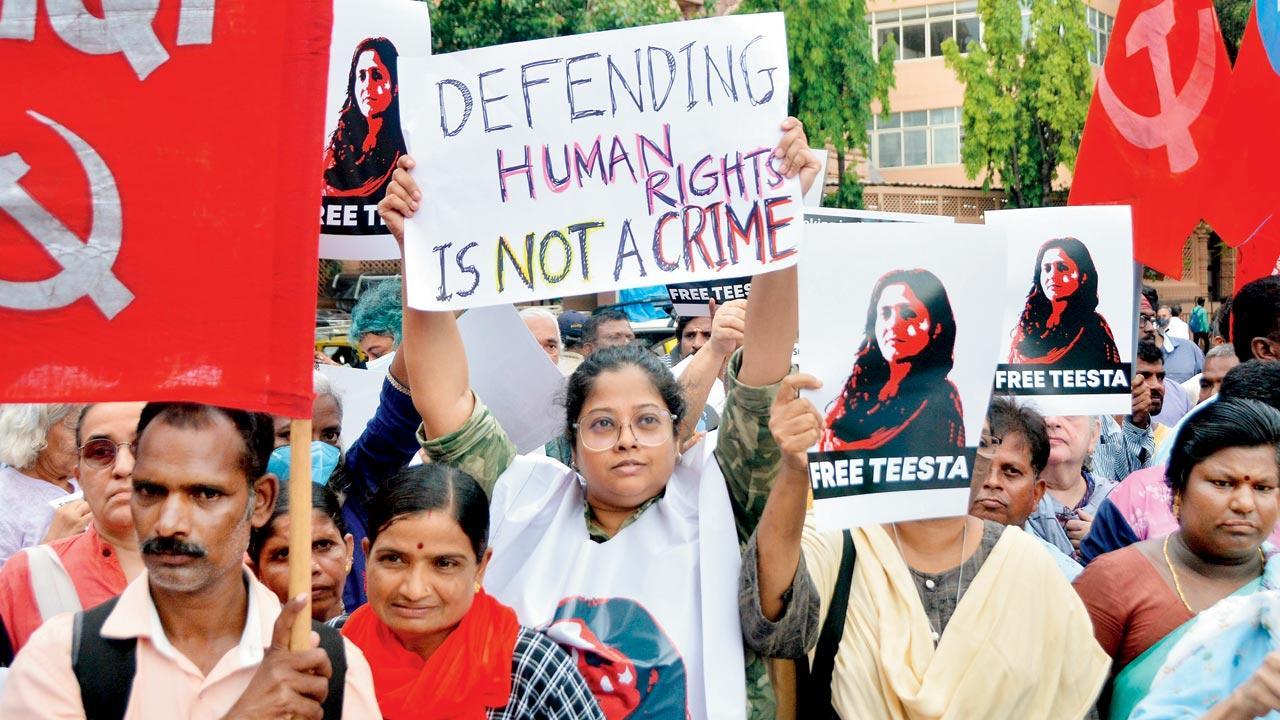 
A Group of Teesta Setalvad supporters gathered outside Dadar station on the east side on Monday evening and struck up a rally cry to ‘free’ her. Setalvad, a civil rights activist and secretary of NGO Citizens for Justice and Peace (CJP), was picked up and detained from Juhu in Mumbai on Saturday, taken to Ahmedabad and arrested.

“Ahmedabad, America or even the Arctic, our voices raised in protest against the illegal action against Teesta will resound across the world. This has already dented India’s image internationally. We have seen the United Nations intervene,” said rallyists, just before unfurling a huge banner amid the evening rush outside the station.

The UN Special Rapporteur on Human Rights Defenders Mary Lawlor has been cited in several reports expressing “deep concern” over Setalvad’s arrest and asking for her release.

That is exactly what her group of supporters with banners and placards stated as slogans like “Narendra Modi dadagiri nahi chalegi, nahi chalegi” and “Amit Shah taanashahi nahi chalegi” rent the air. Several activists insisted this was “a revenge arrest or action, against a person who dared to expose wrongdoings”.

The protestors reasoned, “The court has given a verdict, we do not deny that but it can be challenged.”

Protesters M A Khalid and Prakash Reddy stated, “Teesta Setalvad is not a terrorist. So, why should the Anti-Terrorism Squad get involved?” All those in support reiterated that Teesta is not a terrorist and nor is she a criminal.

Activist Feroze Mithiborwala said, “We cannot stay silent in the face of this fascist government. The ATS or Enforcement Directorate (ED) cannot be used to scare people. We, as a nation, have been brought into international disrepute by this and we are seeing the beginning not just of a national but international uproar.”

Khatoon Shaikh of the Bharatiya Muslim Mahila Andolan (BMMA) said, “I am here to show my support for Setalvad. One’s on-ground presence is important. Is it a crime to do good?” Another protester Ullas Choudhary claimed, “This kind of high-handedness and sweeping action is a pointer that this can happen to anybody. It can happen to you, it can happen to me.”

By now, the contingent had swelled and a group of protestors in militant red, from the Communist parties, joined the early protesters, cutting a swathe through the crowd with their red flags. A loud shout, “Joh Hitler ki chaal chalega who Hitler ki maut marega (those who use Hitler’s tactics, will meet the same end as Hitler)” went up, and curious crowds, some of them nonplussed at what was going on, whipped out their cell phones clicking away as the protest grew more strident.

There was G G Parikh, freedom fighter and a sprightly 98-year-old,  who stated, “People have to shed their fear, come out on the streets to protest and go to jail if need be. The Gandhians must undertake satyagrahas individually, if need be, just like Gandhiji did.”

The sloganeering gained momentum. “Bol re sathi halla bol, BJP pe halla bol, RSS pe halla bol, Sangh pe halla bol,” went the chants. “How can somebody be arrested on suspicion of a conspiracy? This is a miscarriage of justice,” said G Menon. Another stated, “Shouldn’t an arrest come ‘after’ an investigation or inquiry? People who have the power to put away some behind bars are using it vindictively.”

A group of 300 students, teachers, activists and civil society members protested at Jantar Mantar in New Delhi on Monday against Teesta Setalvad’s arrest. Joined by Congress leaders Jairam Ramesh and Ajay Maken, protesters called it an attempt to “silence” other activists. All India Students’ Association president N Sai Balaji said, “If the fight against injustice is being criminalised, what message are they giving out? That we cannot speak against communal riots? That no one can stand with the victims?”

Meanwhile, an Ahmedabad court granted remand of Teesta Setalvad and former Gujarat DGP R B Sreekumar to the Crime Branch till July 2.

Next Story : Not in touch with Eknath Shinde camp: Sanjay Raut’s brother Sunil