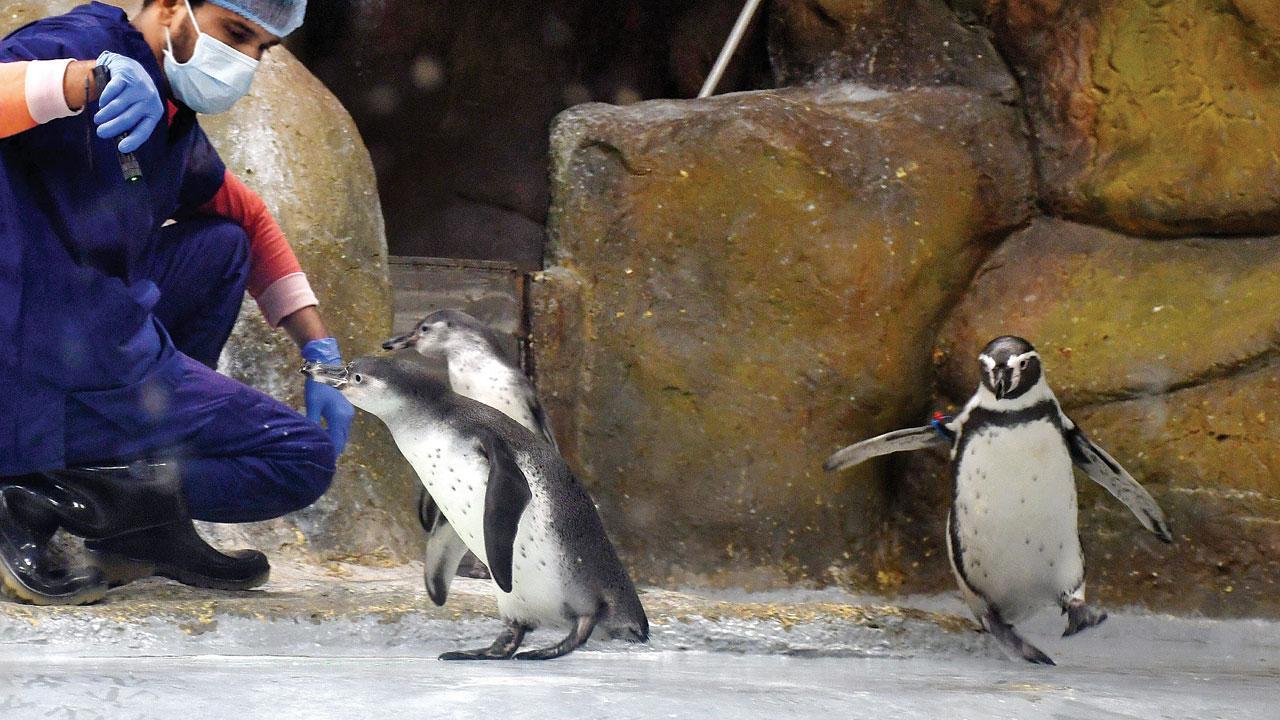 
Check out my tux, mate

A caretaker tends to the 2022-born baby Humboldt  penguins — Flash, Bingo and Alexa —  at the Veermata Jijabai Bhonsle Udyan in Byculla

Around Bandra on autopilot 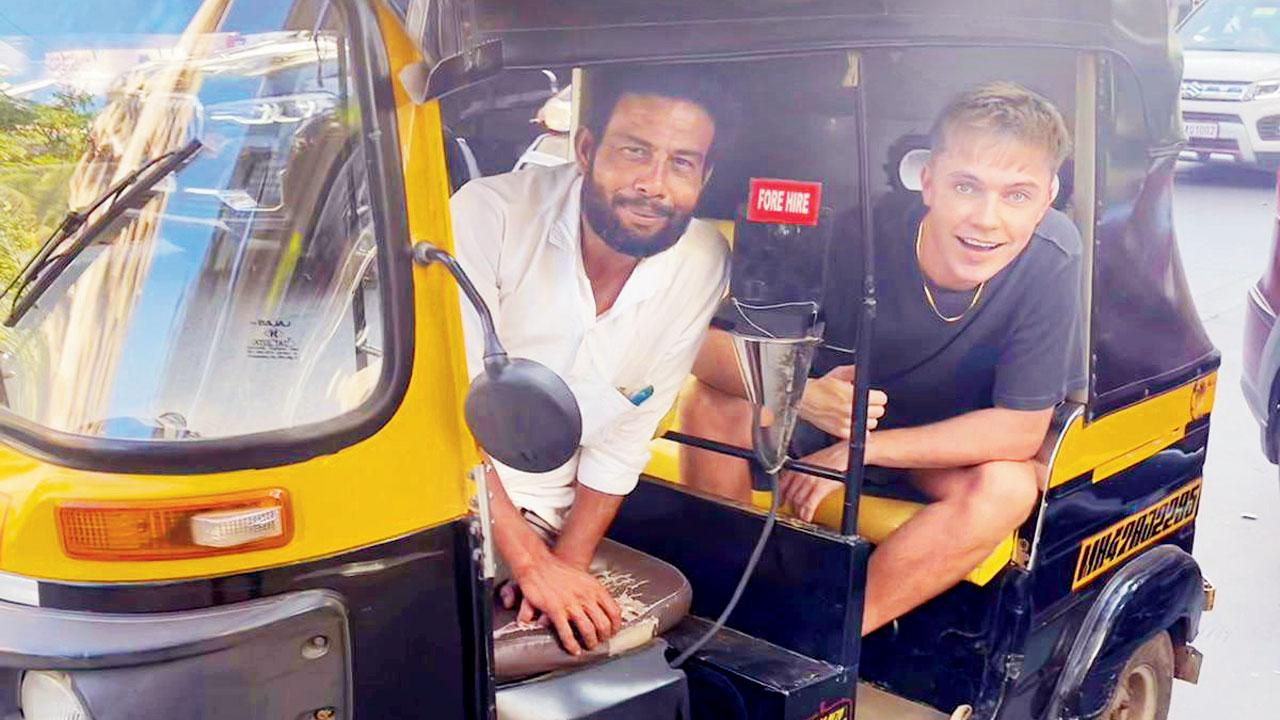 Brad Pitt did it. So did Will Smith. Salman Khan loves them, and now, the humble Mumbaikar’s black and yellow auto rickshaw ride has found a new fan in British artiste, HRVY. The signature Mumbai transport was the musician’s choice for a local jaunt through Bandra on his return after four years. “I love experiencing local cultures, traditions, food, etc. when I’m touring — so I just could not miss a ride in the famous black-and-yellow autos of Mumbai,” he told this diarist. While his India tour had to be rescheduled after the postponement of a music festival in the North east, the singer has no regrets. The 23-year-old R&B singer revealed that he already has a packed schedule this week with promotions for his new EP, Views From The 23rd Floor and the single, I Wish I Could Hate You. “It feels great to be back in Mumbai! It’s been almost four years since my last visit and I could not wait to get back here,” he said. It is not all work though as he also plans to interact and meet with his fans in the city. “I’ve always had a great response for my music from India. And so, here I am to connect with my fans on the new music. I’ll be here all this week, so I am really excited about it,” he shared. As for the ride, HRVY said that it was a practical solution to the eternal woes of the Mumbaikar — traffic, “It’s very cool, and helps you get through the traffic quickly. I just love them!” There are quite a few Mumbaikars who will agree with that sentiment. 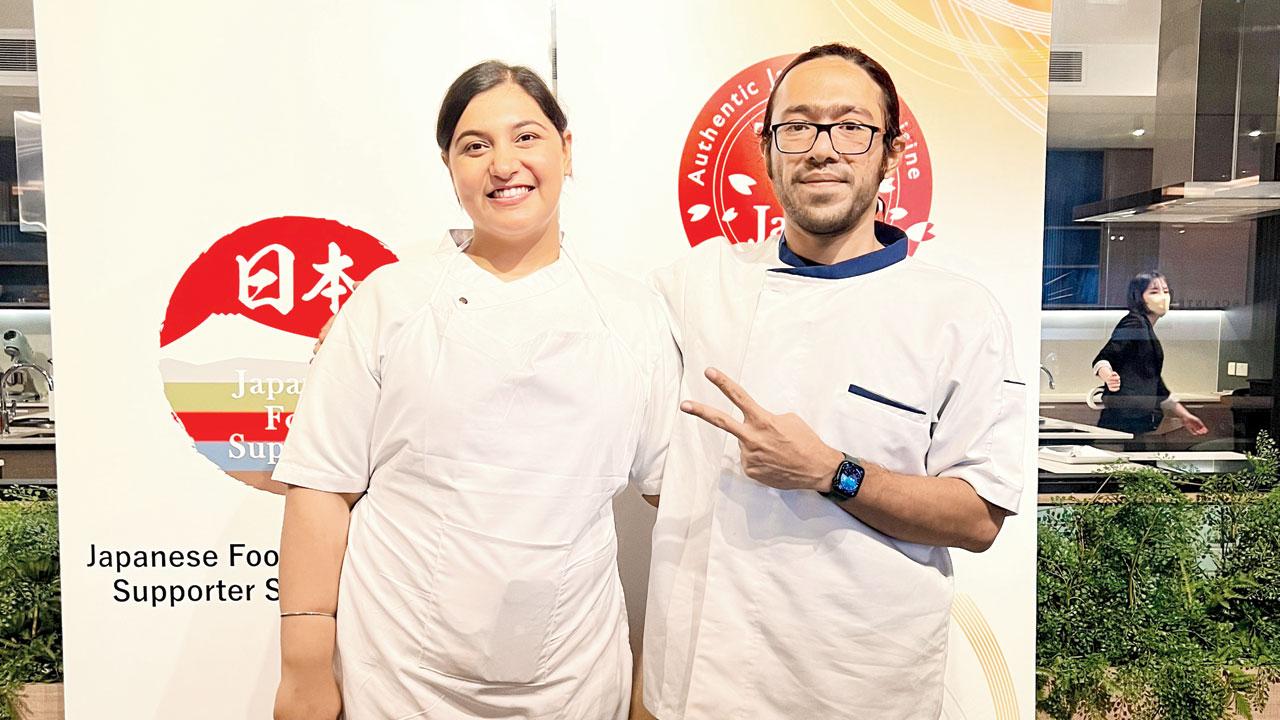 Chef Lakhan Jethani of Khar’s Mizu is back from Japan after competing in the Washoku World Challenge. The Japanese culinary competition is organised by the cultural ministry of Japan. “It is a competition for non-Japanese cooking chefs,” said Lakhani, who was joined by chef Kripasha Miniya in representing the city. 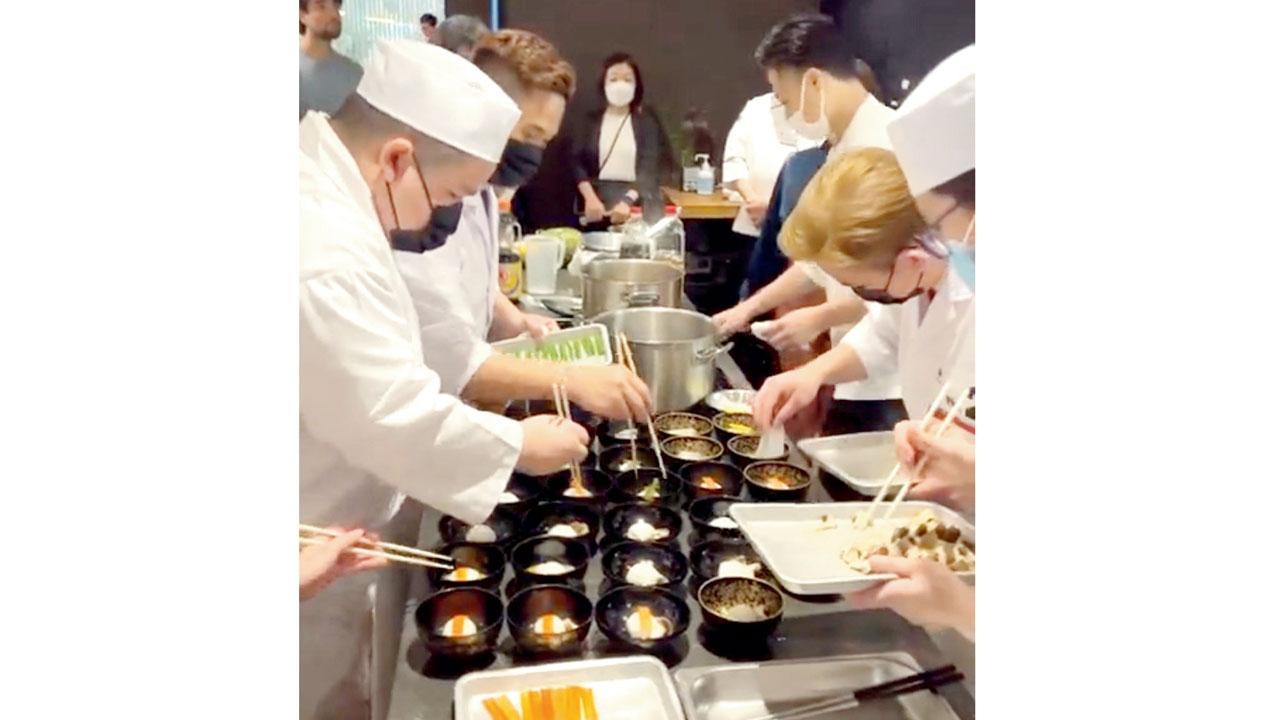 A moment from the competition

The duo was challenged at the competition to create a dish around the theme of Japanese stock — dashi — to use in their original recipes. “To participate at that level with international chefs in Japan was quite an honour and an experience,” Lakhani revealed.

Manu’s back in Mumbai 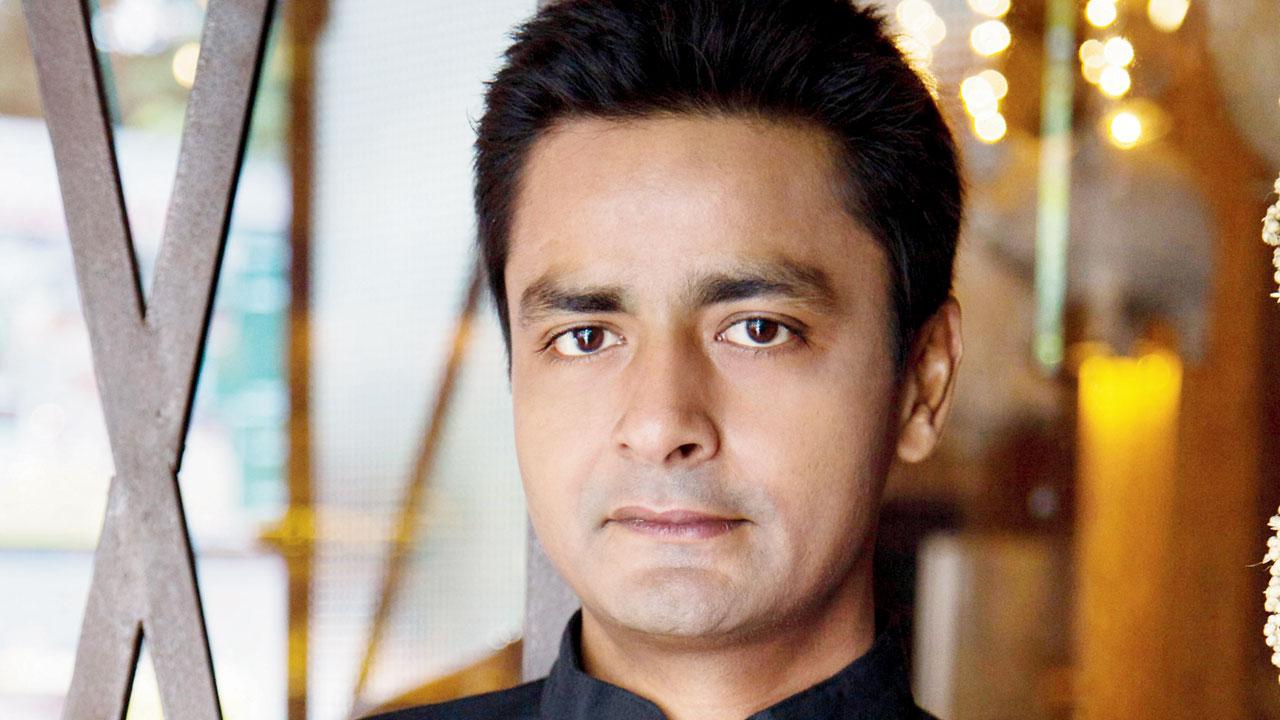 Chef Manu Chandra — who’s had an eventful year cooking from Bengaluru to France and beyond — is back in the city. And he’s bringing his signature playful touch along for a chef’s table at Hakkasan, Bandra, later this week. While the chef has been flitting in and out of Mumbai for private events, this will mark his first pop-up in the city in a while. Calling his approach to the six-course Only At menu a “jugalbandi” of his style and Cantonese flavours, the chef told this diarist to expect unique delicacies including confit duck doughnuts, portobello tarte tatin and three-grain sticky fried rice. “We’ve taken some concepts and juxtaposed them with Cantonese flavours. For instance, the tarte tatin is a French dish but the idea of using puff pastry travelled through the world and reached China. So, it’s a bit of playing with history,” he said. 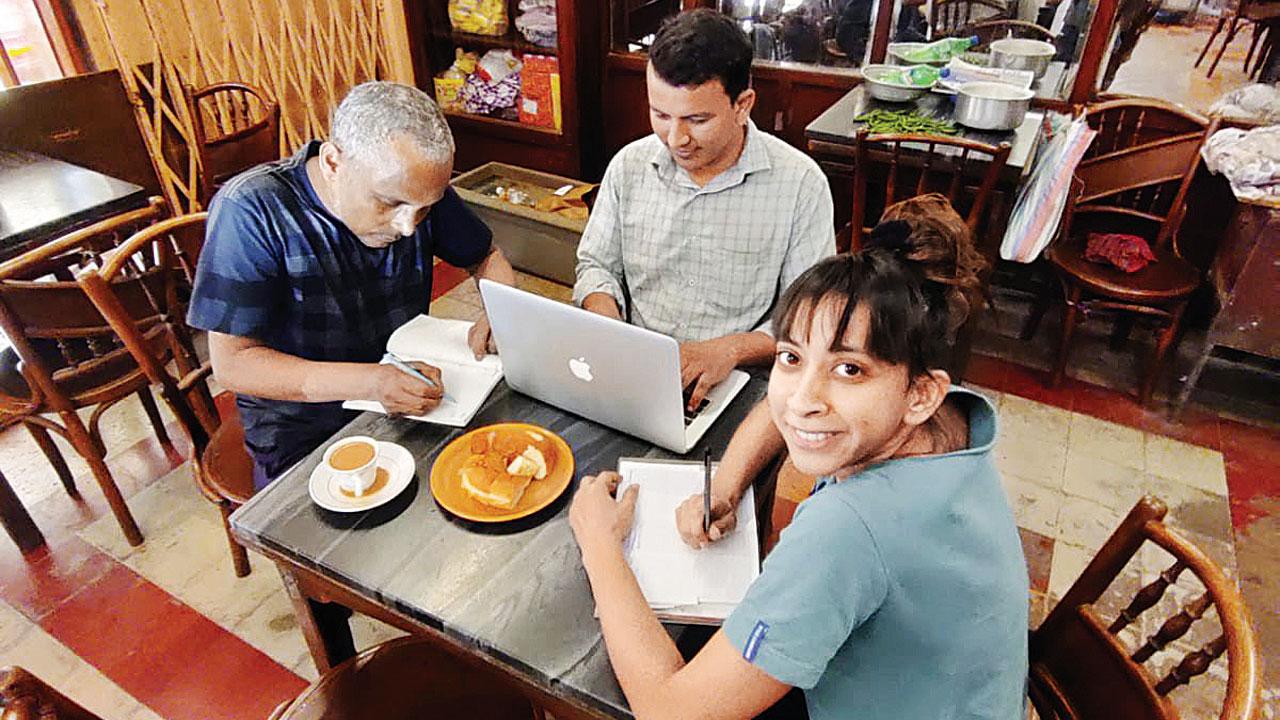 Something about Cafe De La Paix in Girgaum catches the eye of writers. Theatre director, Yuki Ellias, a regular at the café, decided to turn the ambience into opportunity and will host a speed writing competition in mid December. With different themes across three rounds open for all languages, Ellias said the competition was a chance to meet new people. “We wanted to do something more community driven and fun. You are in an interesting part of the city, and the café is an oasis of creativity for me. This is the place to have a writing challenge,” she said. Owner Gustad Dinshaw Irani remarked, “I have always said that this place is an artistic venue open to like minded people.” While there is no entry fee, participants do have to register for a chance to win prizes. Those interested can drop a message at @yuki.by.yuki for details. 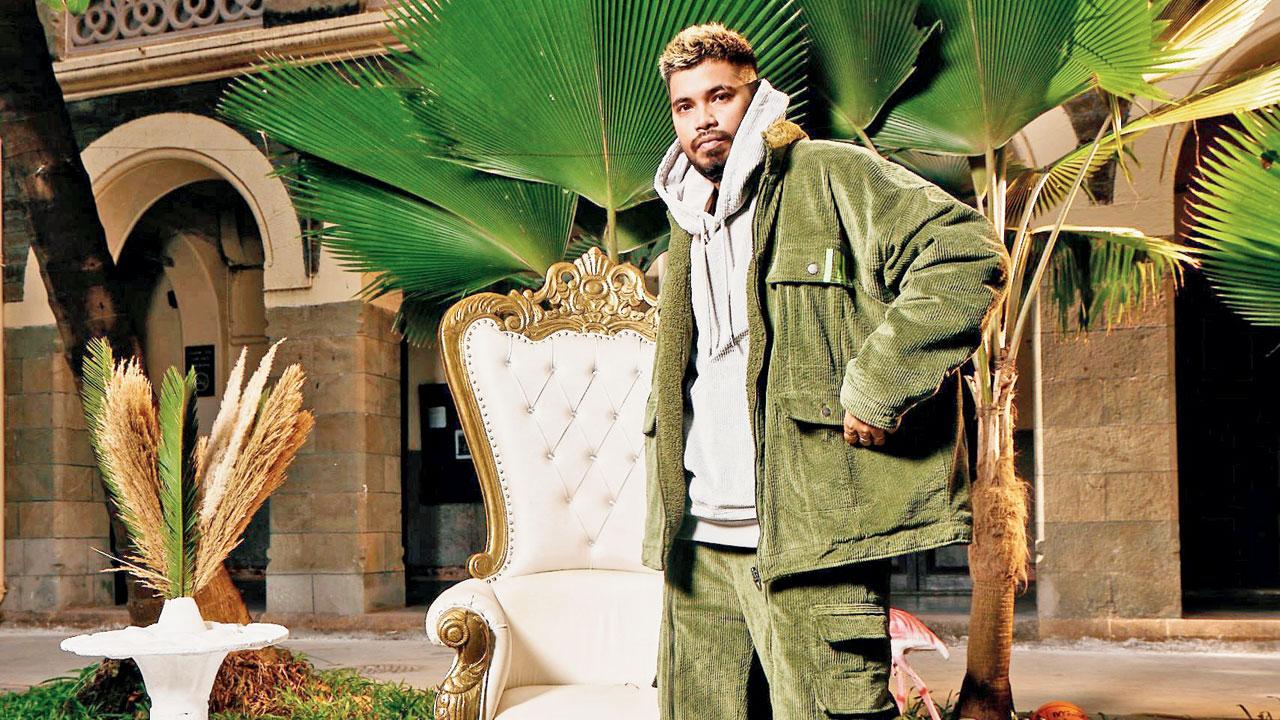 While the regret of India not getting a chance to play in the FIFA World Cup will hurt fans, the Indian connection to the tournament this year is strong. Lil Baby’s The World Is Yours To Take, part of the FIFA soundtrack for the tournament, will include several Indian names in its official video. Artist Santanu Hazarika will join actor Siddharth Chaturvedi, singer Anushka Manchanda and rapper Divine on the video. “The idea was to include several names from the art and music community in India,” said Hazarika (inset), who is on his way to Doha for the shoot. The artist revealed that Lil Baby was a favourite, and the venture is a rare opportunity. “The celebration this time feels bigger after the lockdown. It feels like a grand reopening for the World Cup.” Of course, when in Qatar, Hazarika plans to catch his favourite team — Brazil — in action. “I have always been a big fan of Brazil. I hope to see their qualifying match against Cameroon this weekend,” he said.