Killer banker tells police he is desperate to get out of jail, but says wife has not been helping him get an expensive lawyer 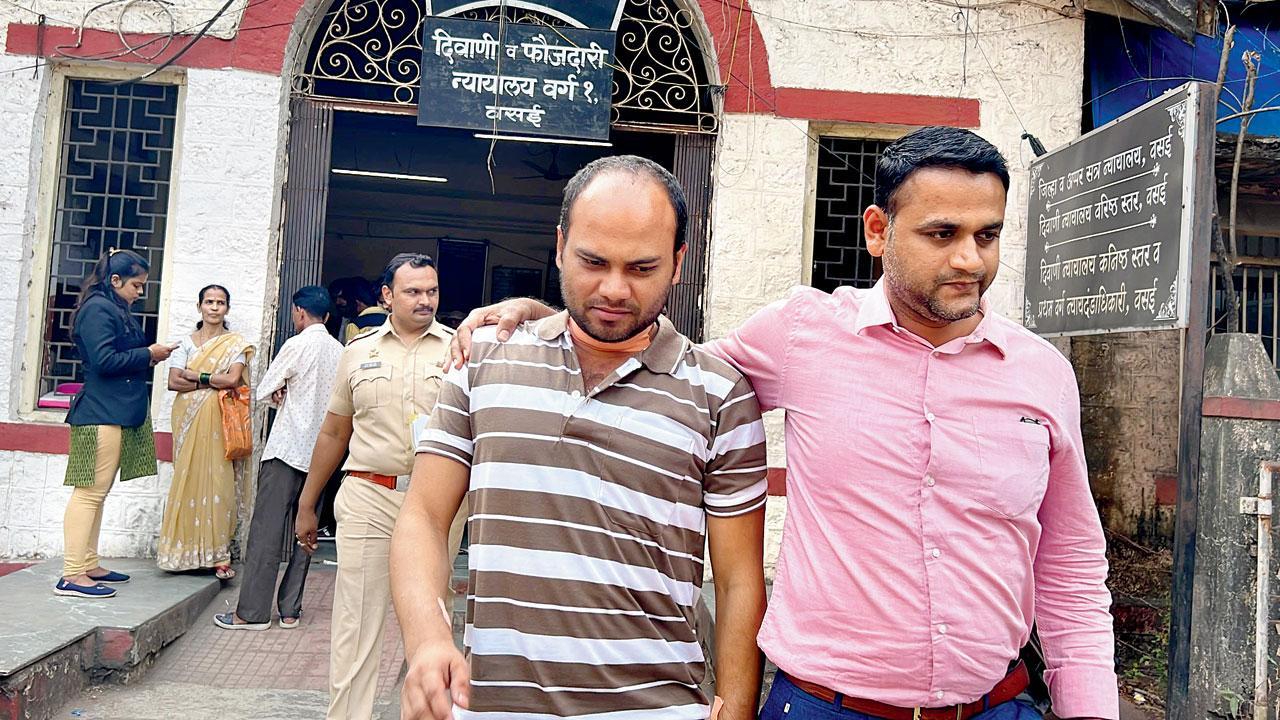 
Murder accused and sacked bank manager Anil Dubey was so desperate to get out of jail that he worked out in jail and lost 25 kilos in the past six months. His plan: to beat the police in case he had to run during his escape. Dubey did flee from police custody last week but cops cut short his freedom within 48 hours. He told a Vasai court on Thursday that he was dejected as his wife had cut off ties with him.

About six months ago, police sources said, Dubey hatched a plan with an undertrial named Chand Aziz Khan when they were kept in the Thane Central prison. He resorted to rigorous exercises to burn up his belly fat and toned up his physique. 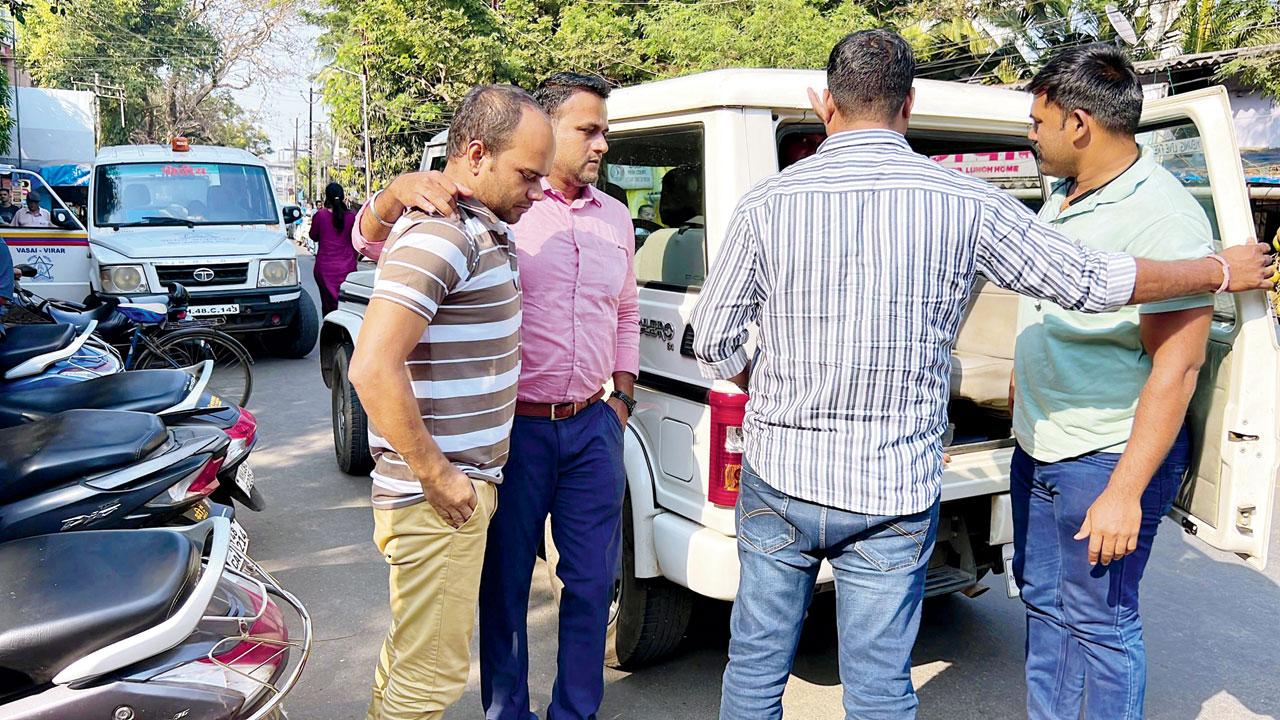 (Left) Dubey, who now has a chiseled body, with cops outside a Vasai court on Thursday. Pic/Hanif Patel

“I was around 90 kg when I was arrested. But I worked out hard inside the Thane Central jail and lost around 25 kg in the last six months,” Dubey told his interrogators after he was rearrested on Sunday. Dubey also tried to kill himself in a Crime Branch lock-up in Vasai on Wednesday by slashing his throat with a paper pin. He was saved after the cops rushed him to a nearby hospital.

Sources said Dubey has been telling the police that he needs a good and expensive lawyer to get bail and that his wife is not helping him. Dubey has apparently told his interrogators that a cold shiver runs down his spine whenever he thinks about his former colleague Yogita Chaudhary, whom he killed during his attempt to rob a Virar branch of the ICICI Bank in July last year.

“Whenever I sit alone, her [Chaudhary’s] face comes before my eyes. She has been chasing me; she scares me all the time… she will not spare me…,” said a source quoting Dubey. A police officer said, “He [Dubey] told me that whenever he sits alone, he starts shouting ‘wo aa gayi, wo aa gayi…’ and then breaks into tears. He seems petrified. He told me that it was not his intention to kill her but only to loot the bank. But he could not control his anger when his former colleague stopped him from looting the bank.”

Last Friday, Dubey escaped from police custody on the pretext of using a toilet after he was brought to a Vasai court. He was helped by Khan, who was out on bail, and the two fled on a two-wheeler. They were arrested within two days, from a Nalasopara slum. On July 29, 2021, Dubey killed his ex-colleague Chaudhary and stabbed another female employee, Shraddha Devrukhkar, as he tried to loot the bank where he once worked. He was caught after Devrukhkar raised an alarm. 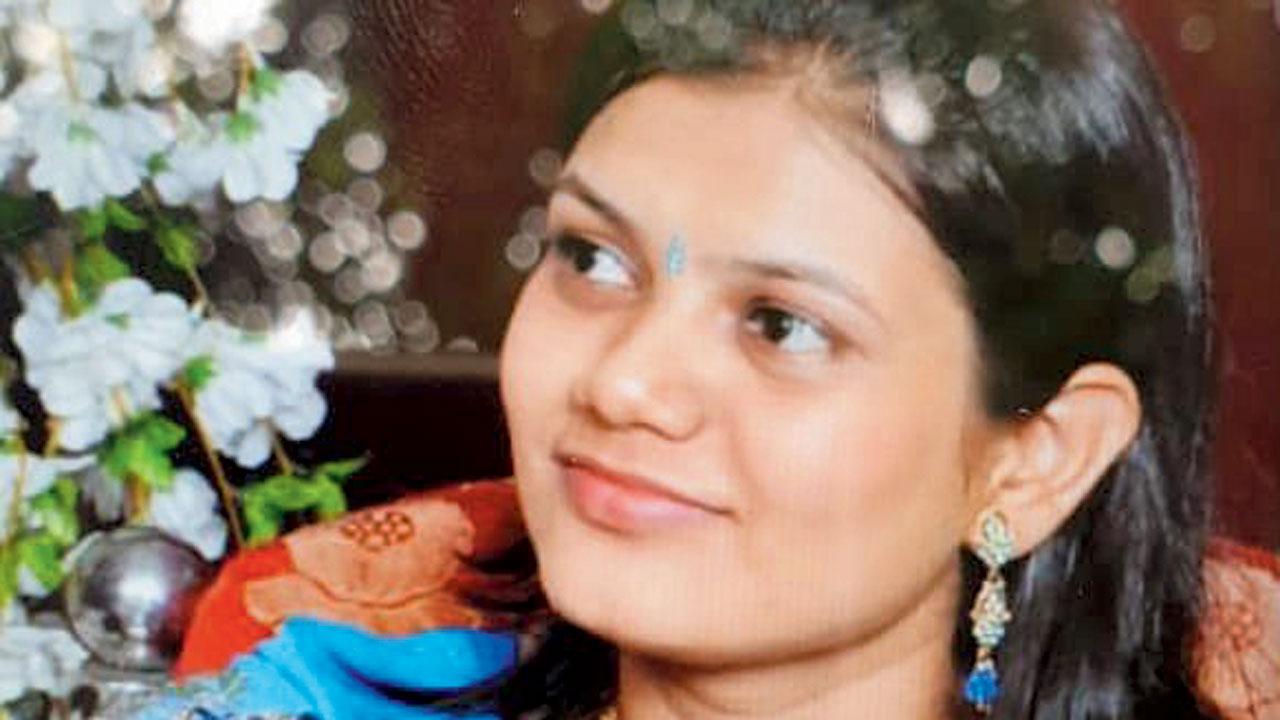 Dubey was sent to the Thane jail after his arrest. “He told us that his wife and relatives do not come to meet him in jail. He believes that if his wife hires a good and expensive lawyer, he can come out of jail…,” said an officer. A source also said that Dubey’s wife is living with a close relative and is unlikely to have the financial resources to help him.

In police custody, Dubey, who lost everything in the markets, gives tricks to cops to earn quick bucks. “He has been suggesting investment plans and encouraging us to trade in shares,” said an officer. “He tells us he will buy a Fortuner car within a year if he is set free from jail.”

A day after he attempted to kill himself, Dubey and Khan were brought to Vasai court on Thursday. Inside the courtroom, the judge asked Dubey: ye kya hua (pointing out towards the wounds on his neck and wrists)?

Dubey: Maine khud se kiya hai
Judge: Kaise kiya?
Dubey: Pin se
Judge: Tum to police custody me ho, fir pin kahan se mila
Dubey: niche gira hua tha…
After a few minutes, Dubey urged the court to allow him to speak. “Mai depression me hu… 302 case me andar hu… mujhe bahar nikalna hai… mere se galti hui hai… court me mera number nahi aata… mera chhota baccha hai…” he told the court.
Dubey also tried to connect to his wife through Khan’s two wives but she refused to talk to him.
Khan’s wives said they had struggled to arrange for the money for his bail, but he again got embroiled in another case by helping Dubey escape. Sources said Dubey had promised Khan Rs 10 lakh if he helped him flee.
One of Khan’s wives told mid-day, “We already paid R90,000 towards court expenses to get Chand released on bail. We took loans. Now, he committed another crime. Dubey gave us his wife’s number and asked us to tell her that he needs her help to secure bail. But she told us that she has ended her relationship with him and she will never stay with him even if he is released from jail. Dubey’s wife also told us to tell him to die in jail and never come out.”
After Khan’s wives informed Dubey about their conversation with his wife, he asked Judge A V Musale to give the “final” punishment to him.
Khan’s two wives said he has now asked them to arrange for R15,000 for his bail. “We have kids at home. We haven’t paid the house rent for the past 5 months and the owner has threatened to throw us out. We even asked Dubey’s wife to help us but she blocked our numbers.”

6
No of months Dubey took to lose the weight